CHANGED IN A DAY! One Man’s Miraculous Story of Being Touched by God in the Jesus Movement! 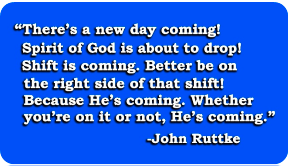 It is incredibly encouraging to hear the testimonies of others, and how the Lord moved upon their lives. When we hear these testimonies, it points us to the goodness of the Lord, and it stirs our faith to believe God to do the same in our lives. Imagine someone causing destruction to their local community while walking the streets in rebellion. Though that may sound like today, this is what was happening in the 1970’s. Imagine someone tearing down your city today, being in the Kingdom of God tomorrow. This is what the Lord was doing in the Jesus Movement. During the 1970’s and the Jesus Movement, people were being mightily touched all across the nation.

John Ruttke was one of these men. When speaking to a local crowd, he talks about how a sovereign move of God changed his life in one single day. As one who has been walking with the Lord since the 1970’s, he sees that God is doing something mightily, and shares his priceless wisdom of what he experienced in order to help the next generation. “There’s a new day coming! Spirit of God is about ready to drop! Shift is coming. Better be on the right side of that shift! Because He’s coming. Whether you’re on it or not, He’s coming!” Ruttke continues to emphasize the importance and urgency of the present hour by responding to the Lord. “So, It’s wake up time and the Lord is about ready to WAKE HIS PEOPLE UP AGAIN.” This isn’t just going to be another revival. No. “IT HAS TO BE A GREAT AWAKENING. HAS TO BE! It can’t just be another nice movement. No. That won’t do it for where we’re at. It’s got to be an awakening. HAS TO BE AN AWAKENING! GOD’S GOT TO BEGIN TO GRAB A HOLD OF HIS PEOPLE!” As John Ruttke continues, he points out the raw reality of where he was when the Lord found him, and what the Lord did. “Listen, we were left-wing radical, Molotov cocktail throwing, hippies as far out as you can get and in ONE DAY I was changed. Devout Buddhist, into eastern mysticism. ONE DAY! ONE DAY! CHANGED! ONE DAY!” 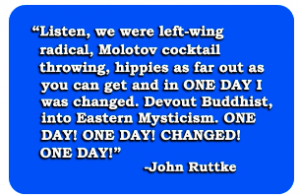 How can someone be powerfully changed like that in a single day? GOD! This is so very exciting! This is what God does. God did the same thing to Saul, who was persecuting the Church, and SUDDENLY, a bright blinding light from heaven shined upon him. Jesus revealed Himself to Saul so powerfully that he became blind for three days. Saul had a sudden realization that he wasn’t serving God, but he found out the truth that day. Jesus spoke clearly to him, as shown in Acts 9:5a-6, “I am Jesus, whom you are persecuting,” he replied. “Now get up and go into the city, and you will be told what you must do.”

God did this IN A MOMENT!

You might not have known that God can do such a miraculous miracle in someone’s life, IN A DAY. You are no different. If you know the Lord, but you don’t think the Lord can touch the one rioting in the streets today, we can miss God. If you don’t know the Lord, you can. You can simply talk to Jesus this very moment and ask Him to come into your life and change your life. No one is outside the powerful arm of Jesus Christ, or too far for His blood to wash clean. Don’t let this moment pass you by. Let God miraculously turn your life around TODAY!  If you’d like to Know God, you can.  Select Know God and you’ll be taken to so much great information about this very thing; Know God

Being Led By The Spirit Is The Key! The Wisdom of...