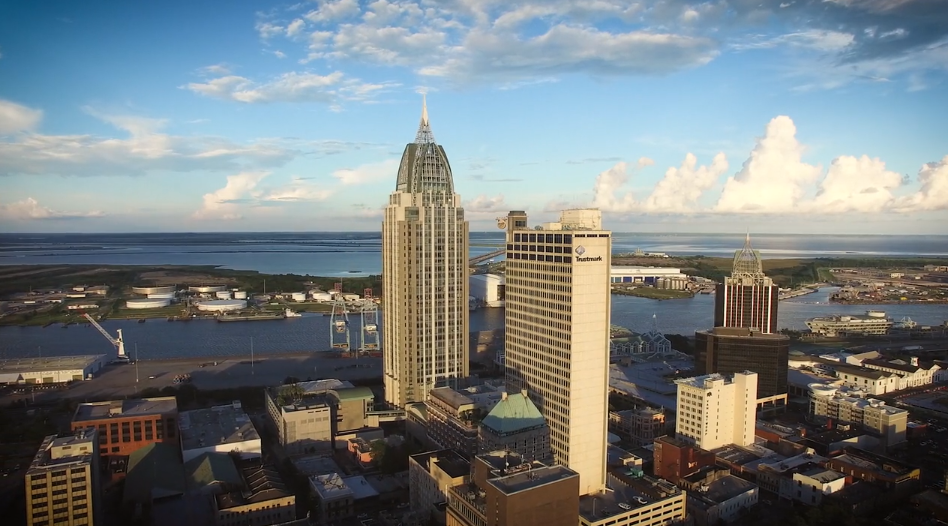 Turning a City back to God, The Canopy of Prayer in Mobile, AL; & the Mayor Signing a Declaration of Prayer

LISTEN NOW! (Or Watch Full Program!) There is nothing more motivating and encouraging than to see an entire city of people turn their hearts to God and believe for God to turn their city around. This is exactly what is taking place in the city of Mobile, Alabama. Through an event called, ‘Port of One’ an entire city wide mobilization is happening as people were gathered to worship on April 1, 2017 at the Saenger Theatre.

As Port of One calls an entire city to seek the heart of God, they described it with these powerful words: “We are calling all believers all along the Gulf Coast to assemble together for one powerful night of worship; igniting our community with one love, preparing our hearts and our city to be transformed. We will be one family, one city, together who believe.” When we see one Church, one Lord, and one Spirit coming together, this is the spirit of the commanded blessing.

Lines of people crowded the sidewalk waiting to get in to this awesome gathering. As the Church gathered together in Mobile, to pray for their city, Hunter Thompson and Kalley Heiligenthal, from Bethel Music, led the worship. The entire event was funded by Fred Rettig, a local businessman who owns Rettig Auto Body in Daphne, Alabama. This is what the Business Mountain is all about; understanding that God desires to bless you with creative business ideas and applications for the sole purpose of advancing the Kingdom of God. Not only are we seeing local business owners standing up for God in Mobile, but also the Mayor of Mobile, Sandy Stimpson.

Stimpson understands the principle of casting vision as he not only wrote a  Proclamation of Faith over his city, but also passionately reads these encouraging words. He begins by reminding us how past kings have done the same. “In days of old, kings and those in authority wrote Proclamations of Faith also known as decrees to unite the people and to provide focus and clarity and purpose, by acknowledging their Creator…” As he reminds us of the words from 2 Chronicles 7:13-14, he shares, “Our city has long had a faithful remnant of intercessors praying for our city’s leadership and for God’s intervention to forgive our sins and heal our land.” Mayor Stimpson continues this Proclamation of Faith highlighting where the city of Mobile puts their focus on; “We desire to have true God-ordained unity, prosperity and growth in our community, with our full most hope being to have thy will be done for His Kingdom’s ultimate purpose…”

We can feel hope and inspiration arise as Mayor Stimpson continues to declare the victory that is upon Mobile. “…Now is the time in Mobile for unity to overcome division, for neighborly love to overcome envy and selfish ambition, for compassion to overcome condemnation, for humility to overcome pride, for prosperity to overcome poverty, for good health to overcome sickness, for joy to overcome sadness, for peace and harmony to overcome wrongdoing and misconduct, for faith to overcome fear, and for prayer to overcome worry.” But, this isn’t just about reading a Proclamation of Faith and filing it away, Mayor Stimpson describes how he was approached with the “Action” side of this; A Canopy of Prayer. “Whereby we would walk all the streets in the city of Mobile, praying for the city and all of our citizens; I was immediately captured.” At first, the idea was to have this event take affect over the course of an entire month. But, in faith, Mayor Stimpson knew it could be done within one single day. ‘There are enough God-fearing people in this city that can carve out just a few moments to walk their street, or their neighbor’s street, and sign up and say, ‘I will walk the streets of Mobile, praying for God’s divine intervention’’. ,  You can sign up to register and be a part of this awesome Canopy of Prayer on April 29, 2017 as the streets of Mobile, Alabama are covered in prayer.

It is so vitally important to remember that prayer changes everything. Just as we are seeing the Church in the city of Mobile mobilize and come together under the unity of Jesus Christ, we can see that we can do this in all our cities. You can do this in your city; right now. The Church is not a building, but a people. For too long, we have looked to a building to do something that only the people can do.

The city of Mobile did not just arrive at the reality that we are now seeing. There has been a journey and a travailing in prayer for what is being birthed in their city. Nearly 20 years ago, the Spirit of God was breaking forth in nations throughout the world. While this was taking place, business owners and leaders in the community of Mobile, Alabama, gathered together to write a Proclamation of Faith for their city. “It was prayed over and placed in a high place in the Mobile skyline.” It didn’t take long for God to respond to their actions of faith. “Later that same year, the first ships from the new Austal Facility, began rolling off the assembly line.” It was only a matter of a few years when the city of Mobile, Alabama, would once again be recognized. “Three years later, the national media declared Mobile a ‘city of refuge’ to those escaping the wrath that Hurricane Katrina had dealt to the New Orleans area; and today, the Port of Mobile is listed as one of the top ten ports in the United States.”

It is these same breakthroughs that are taking place in Mobile, Alabama because those in the Church understood the power of prayer and believing that God heard their prayers. It is so important to recognize how God has called us to reach and impact all seven areas of influence in our cities: Government, Family, Arts & Entertainment, Education, Media, Church, and Business. For so long, we as the Church, have focused solely on “doing church”. We gather on Sunday morning and neglect the other 6 ½ days of the week. God has still called us, as the Church, to advance the Kingdom of God during these days as well. We must have a presence in our cities and not become critical about what is taking place in our cities. We are seeing action taking place through a Canopy of Prayer in Mobile, Alabama, and we can see the reality happening in cities across America.

See the full story of this exciting night of worship that took place in Mobile, as well as the Canopy of Prayer, Mayor Stimpson reading the Proclamation of Faith, the full story behind the Canopy of Prayer, and so much more. Greg and John shared in this segment. Also shared in this segment: prayer, repentance, humility, prayer walk, spiritual warfare, Mobile Alabama, US Air Force, Airbus, Austal, Boeing, Brookley Field, 7 Mountains, 7 Spheres of Influence, commercial airliners, economy,  and hope.
screen capture from vimeo.com/For him Films

“We’d like to thank Stephen & William Braswell – For Him Films of Mobile, Al, for their amazing ability to film high quality work, that puts a smile on hearts and which makes such a powerful impact on those who get  the opportunity to see their work!  Don’t miss any opportunity you can get to work with them.”

Psalm 133
Related Articles
Jesus and the Great Expectation; Then they WENT OUT
The Gospel, The Commission: Our Privillege
The Protocol for the Coming Outpouring of God’s Spirit
“The Anointing is on You for Your Assignment!” says Lance Wallnau Advancing the Kingdom of God by Conquering the 7 Mountains of Culture!
Are You Prepared for God’s Suddenlies? An Outpouring is soon Upon Us
“CAN YOU BRING GOD INTO THE WORK PLACE?” FORTUNE 100 CEO & U. S. CONSTITUTION SAYS YES! FRED SIEVERT TELLS ALL ABOUT IT IN HIS BOOK “GOD REVEALED”
There is Something Special When the Church Comes Together as Family
American Christians Using the Wealth, Resources, Innovation and Freedom to fulfill The Great Commission
Making Disciples in the 7 Mountains of Culture
7 Mountains of Culture: Empowering Governmental Leaders for the Hard Work Ahead
WATCH! Reclaiming the 7 Mountains of Culture Arts, Entertainment and Media; Impacting our Culture for the Cause of Christ
Preparing to have Impact in the 7 Mountains of Society
Having True Impact for Jesus in the World we LIVE in: Declaring Jesus is Lord over All 7 Mountains of Society
Called to Transform the Culture
Let’s Not Walk Off the Mountain Leaving Our Place of Influence for God: Let‘s let Our Light Shine
You are Called to Be a GAME CHANGER in Society! Right Where You Live, Work, and Play: Kingdom Impact
#VFNtv     M1O2U3N4T5  G1O2V3E4R5N6  F1A2M3I4L5Y6   F1A2I3T4H    H1O2P3E  E1N2T3E4R5T6A7I8N9   R1E2L3I4G5I6O7N8   E1D2U3C4A5T6E7   M1E2D3I4A5  B1U2S3I4N5E6S7S8   C1I2V3I4L5   S1P2I3R4I5T6   C1H2U3R4C5H6   G1L2O3R4Y5
0 FacebookTwitterPinterestEmail