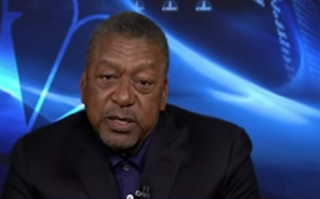 LISTEN NOW! On more than one occasion President Elect Donald Trump has expressed that he is not a politician, nor is he looking for the talents of politicians to fill one of the vacancies in his cabinet. This couldn’t be more evident in his recent invitation to Robert “Bob” Johnson, businessman and founder of B.E.T., Black Entertainment Television. The details of the specific position offered to Johnson has yet to be disclosed, yet Johnson was very clear about his support of President Elect Trump.
When discussing the topic of President Elect Trump while on CNBC, Johnson shared, “I’m a Democrat and I say this with all due respect to the Democratic Party and I say this to the Republican Party. This country needs somebody that is going to lead it not somebody who is going to force us to choose sides…” This is such an encouraging exchange, Johnson and President Elect Trump, to see someone voted into office by the people of the nation, and then to see that leader invite people to discuss important matters AND listen to what they share! Johnson also squelched accusations that Trump is a racist when he reportedly pointed out, “he never thought Trump is a racist or anti-African American”, as reported by CBN News.  See the full dialogue and response from Robert Johnson, and so much more. Also shared in this segment: leadership, Constitution, freedom, and President Richard Nixon. Greg and Steve shared in this segment.
WATCH FULL PROGRAM!