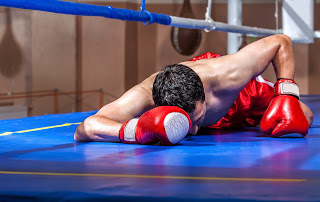 Is America About to Be Knocked to the Mat? by Jon Jones

Over the next several years, the world is going to experience upheaval, turmoil and extremely hard times in governments, economies throughout the world and in geophysical realms. These things will not come all at once, but will come upon the earth similar to a boxing match.

In the first rounds of most boxing matches, the blows delivered by each fighter are absorbed. However, eventually a blow comes that, because of the previous blows, will cause a fighter to fall to the mat.
During a fight there are times of reprieve. We have been experiencing a reprieve and will experience more of those times in the future. Eventually, the ability of the fighter to absorb the punches diminishes and the final punch is delivered, resulting in a knockout.
For many years now, our country has been able to absorb numerous punches, but we are now entering the later rounds of the match. Punches that were absorbed in the early rounds are about to come again. This time, those punches will not be as easily absorbed. America is about to be knocked down to the mat.
In Acts 2, the Holy Spirit comes to the believers, fulfilling what Jesus said in John 16:7-11. In Acts 2:14, Following this encounter with the Holy Spirit, we find Peter speaking to the people, explaining what is happening. Peter refers back to a prophetic word by the prophet Joel, speaking of a time when God would pour out His Spirit on all flesh.  Continue Reading…
courtesy of Petrenko Andriy shutterstock.com8x100215awh   PWDV   PWDVUS
0 FacebookTwitterPinterestEmail