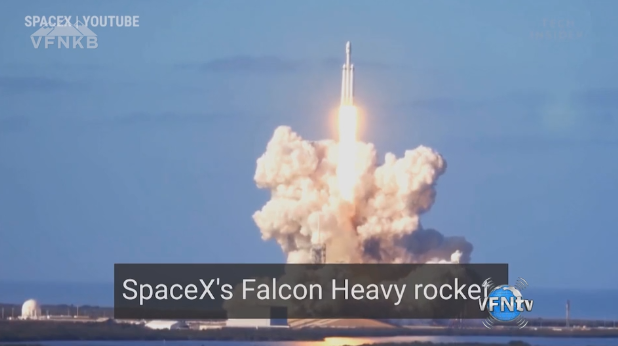 LISTEN NOW!
TESLA ROADSTER LAUNCHED INTO SPACE, LARGEST ROCKET ON EARTH, SpaceX
In the 1960’s, America was part of the space race to be the first to land a man on the moon. The budget for this endeavor was unprecedented. When governments were reaching for new achievements in space, we are now witnessing companies achieving new accolades. Elon Musk and SpaceX have recently launched one of the largest rockets into space. Musk has the desire to one day colonize Mars.
The rocket that Musk used was SpaceX’s “Falcon Heavy Rocket”. According to Tech Insider, ‘It has 27 engines and can generate more power than eighteen 747 jumbo jets.’ To give us a comparison, the Falcon Heavy Rocket “is the most powerful rocket to fly since NASA’s moon rocket, the Saturn V”. If this were not interesting enough, Musk added his own personal flair to this event by customizing the payload that would be added to this massive rocket.
Musk launched his own Tesla Roadster into space. Musk posted this on his Twitter account, “Payload will be my midnight cherry Tesla Roadster playing Space Oddity. Destination is Mars orbit. Will be in deep space for a billion years or so if it doesn’t blow up on ascent.”
This is a remarkable moment. It is amazing what is taking place in our generation. Companies are now doing what entire nations were doing a few decades ago. What are your thoughts about what we can achieve? What are you dreaming of achieving? See the full details of what is happening, and so much more. Also shared in this segment: Tesla, SpaceX, Elon Musk, science, technology, NASA Space Center, Rocket Launch, battery-operated cars, Mars orbit, and Outer Space. Greg and John shared in this segment.

ISRAEL; 10 THINGS YOU MAY NOT KNOW
For those who have yet to visit Israel, there is no better time to visit than now. If you want to visit, where do you find accurate information about Israel? What about those who know Israel better than anyone, the locals? Hananya Naftali, a Messianic Jew, and former IDF soldier, shares some insight about Israel that many may not be aware of.
Did you know that Israel is only 1/6th of 1% of the Entire Middle East? Yep. It’s true. “So, all those people that say that Israel is the biggest problem in the Middle East think twice…” Some may be aware that many people speak Hebrew in Israel. But, there are actually two different types of Hebrew, “the ancient biblical one and the modern spoken one every year.”
For those who have visited, or seen pictures of the Western Wall in Jerusalem, some may have noticed small pieces of paper that are placed within the cracks and crevices in the wall. These are prayers that individuals place within the wall. What is amazing is the amount of prayers that are placed in the Western Wall every year, “around a million notes are left at the western wall and cleaned out before Passover and Rosh Hashanah.”
There are much notable mentions happening in Israel. If you have not been to Israel, now is the time to plan your trip. See the full insight of Israel from Hananya, and so much more. Also shared in this segment: cemeteries in Jerusalem, street names in Israel, the Jewish Menorah, olive leaves, high-tech companies in Israel, and subways. Greg and John shared in this segment.

PHILIDELPHIA EAGLES, ZACH ERTZ, BOLD, INCREDIBLY SINCERE, CHRISTIAN TESTIMONY
It is beautiful to see people using the platform given to them by the Lord, to bring glory to the name of Jesus. NFL player, Zach Ertz, is one of these athletes. He is boldly unashamed of his faith in Jesus. Zach is married to USA Soccer player, Julie Ertz. When Josh was interviewed before he was part of the winning Super Bowl team, he was just as bold before as he was afterwards.
Josh was asked about how important it is to use his position to glorify God. As he shared, “our number one goal on this Earth is to make disciples…” He continues, “faith in football this Sunday is huge. It’s the platform we have to draw people to the Word, to Jesus. It’s something that we don’t take for granted by any means.”
Jesus is not simply a name or an idea to Josh Ertz, but a real, tangible relationship. “I always knew Jesus. I always knew who He was, but I didn’t have the relationship like I do now.” He recognized those athletes around him who remained steady in their lives amidst the ups and downs. Ertz shared about how he made the decision to make Jesus Christ real in his life by giving his life to Him. “I got baptized this past offseason…so last March was when I truly dedicated my life. It was the best thing that ever happened.”
Many have a relationship with the Lord at a building, but God wants to have a personal relationship with you, in your home, in your heart, wherever you are. Who are you when no one is around? Who are you when the cameras are not flashing? It’s not about ‘going’ to church. It’s about ‘being’ the Church. This is the moment of transformation in our lives. When we no longer live our lives for the eyes of others, but for the eyes of Jesus, powerful things begin to happen in our hearts and our lives.
Are you stable in your faith? Do you want to be just as bold in your faith for Jesus Christ as Josh Ertz is? Do you want to know Jesus Christ in the same way? You can! How does this encourage you in your faith with the Lord? We want to hear from you. See the full interview with Josh Ertz, and so much more. Also shared in this segment: Super Bowl 52, NFL Football, Philadelphia Eagles, Josh Ertz, Holy Spirit, baptism, and testimony. Greg and John shared in this segment.

The Power of GRIT, Lisa Bevere, VFNKB #SuccessSecrets
Some people are shocked and surprised when life hands us the difficulties of reality. What do we do in these moments? Where and who do we turn to? Where does our strength come from? When Lisa Bevere was recently speaking to a gathering of women, she shared some deeply inspiring wisdom on what it takes to rise above these seasons of adversity.
Bevere points to a study that reveals what it takes to endure. “It is called grit.” More specifically, she shares, “they have found out that people who have ‘gritty’ behaviors, or ‘the grit factor’, will actually succeed more than people that are intelligent, more than people that are rich.”  Bevere also points out how there is a difference between a ‘grit factor’ of the world and supernatural ‘grit’. “You’re going to have to operate by faith; and you’re gonna have to know who you are, and you’re gonna have to know how God prepares you.”
This is very powerful and important. It’s not just intelligence, it is the training of the seasons that prepares. We must stick, stay, and stand, even when life stinks. In our present generation, people claim to say that if something is difficult, then it must not be God. Go back and revisit what the Lord has spoken over you. Declare it. Decree it and walk by faith with your hope set upon Jesus Christ.
Does this encourage you? How does this strengthen you to endure adversity? We want to hear from you. See the full wisdom from Lisa Bevere, and so much more. Also shared in this segment: character, trials, difficulties, what am I supposed to do? what do I do now? Lisa Bevere, overcoming difficulty, enduring hardship, character, process, “the grit factor”, and hope. Greg and John shared in this segment.