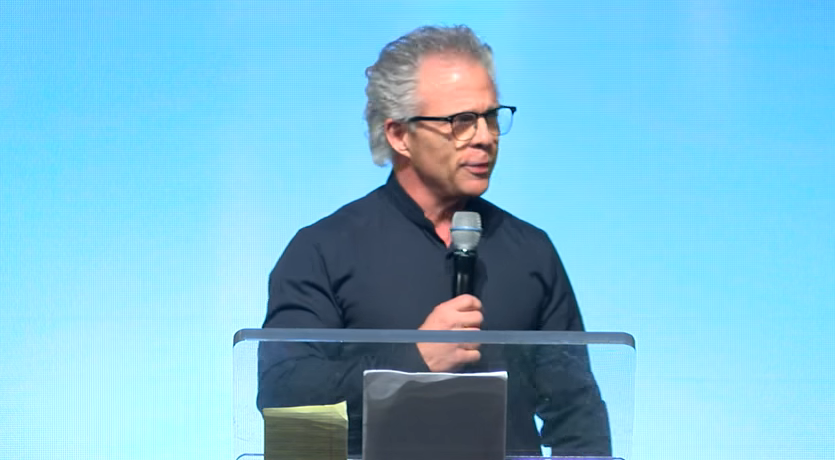 The Lord has revealed so much about what is to come in this new year of 2018. Many prophets have shared what the Lord has made known to them, and Kent Christmas is no different. As he speaks from Rock Church, in Virginia Beach, Virginia, Christmas openly shares that the Lord directed him to simply read what he was told and that this word deals with everything from the nation, the lukewarm, wicked, and the righteous. As Christmas understands the broad stroke that this word applies to, he expresses this to help those who hear it. “So, if it doesn’t apply to you, don’t take it. If it does, then reach out and get a hold of it.” He continues to share, “It starts out really in a negative. It ends up in a positive.”

His words of instruction are immediately understood as he begins his first statement. “The Lord says that, ‘I am now taking hold of the reigns of the nation in the earth and of My Body, the Church. The season of men being in charge is over, and I am no going to perform the word of My prophets that they have declared for generations’”. The strong words of caution continue. “To those in My house who are believers but have left your first love, either return unto Me your passion, or I am going to remove your candle stick, and I will give it to another. And the light of My presence will no longer be in your life because you did not value the presence of the Lord.”

Some may have assumed that the blessings that have come in their lives indicate that the Lord is with them. As Christmas explains, under the unction of the Lord, this is not the case. “I have blessed the lukewarm hoping My blessings would make you love Me more and want to spend time with Me, but you have fallen in love with My blessings instead of Me. I am now going to remove My protection that I have had in your lives, and in your house, and over your families.”

The Lord has been watching how we have been responding to His voice and His hand in our lives. “For Christians who have known My presence and have been filled with My Spirit, but have put no value on that privilege, I am, in 2018, beginning to remove My presence from them and they will no longer even feel convicted for the ways that they go in that are no longer right.” God is after our hearts, and His desire is for us to repent of the sin that hinders relationship with Him and return to Him. “And there is going to be great change in the value system in the house of God…because I’m looking for people to repent.”

Just as Jesus walked into the Temple and turned over the tables of those carrying out business, the Lord is doing a similar work in 2018. “Starting in 2018, I am going to begin to remove many churches in this nation who have made My house a house of merchandise but have caused My presence to be hidden from My sheep. For My house shall be called a hospital” sayeth God, “That shall be filled with the bruised, the broken, and the needy. And though My house has been filled with many, it’s not been filled with those who My spirit has reached out to.”

Many have shared about the mighty coming move of God that will begin to happen this year regarding the indescribable harvest that will take place upon the face of the Earth. “I am releasing My glory and My presence in the Earth because the harvest is now ready,” says the Lord “and I have been waiting for laborers to gather the harvest in.” Christmas continues to explain how the Lord already has what is needed to begin. “I now say unto the church that I have enough laborers to bring the harvest into the house of the Lord.” This is deeply encouraging as many have been preparing with all of their strength to make themselves ready for this coming wave of souls into the Kingdom.

As many prophetic words have expressed how the present form of church cannot hold what God is about to do, Christmas continues this prophetic word, which lines up with what others have shared. “For many houses, your walls will have to be pushed out,” sayeth God “for there is an army of men and women that are getting ready to come into the house of the Lord. And for those that are laborers”, sayeth God “your labor in My work has not been in vain, but the joy of the Lord has been in thee as you watch,” sayeth God “them come in.” This coming move of God is far greater than any of us can fathom. Christmas continues, “Not by the hundreds, and not by the thousands, but by the millions they shall come into the United States of America and to other nations. And My House again shall be called the house of prayer.”

As Christmas continues to share what the Lord revealed to him, it is deeply encouraging to know how significant signs and wonders will be used in this move of God. “You shall stand in amazement” sayeth God “and even the stories that have been told to you by those of another generation shall not be able to measure up to that which I am getting ready to release in the Body of Christ for the glory of the Lord.”

Christmas also addresses how the attacks and schemes of the devil are no match for the Lord, and how the Lord is raising up those who will declare the Word of God with boldness. “The days of the devil and his servants putting a muzzle on my people are over. I now” sayeth the Lord “am going to put great men in places of tremendous influence in the nations. And they will speak with such authority and power that the enemy will not be able to be challenged. And the voices that have stood on your televisions and have said that God is dead and that righteousness is evil, and evil is righteousness,” God said “I am going to smite them. I am now declaring war on the devil and his kingdom, and all his servants which have tried to destroy Me and My people.”

There is going to be such an overwhelming end to those that have opposed God; heads won’t be able to avoid the reality of what is taking place.  “You shall be amazed at the names that are going to begin to leave the Earth. They have tried to detour the power and the glory of the Lord. I am going to replace them with men, hallelujah, who have never been heard and women who have been silenced by the enemy.” The days of the news media refusing to cover what God is doing is coming to an end as well. “And even your news channels,” sayeth the Lord “shall begin to give them coverage of what God is saying in this hour. In 2018, though it will be a year of death for the wicked”, God says “it will be remembered as the year of rebirth and life for the righteous.” It is so refreshing to see how the Lord is responding to the ridicule and mocking that has been so continually carried out against Jesus Christ.

While there have been those that have mocked God, there have also been those that have faithfully walked with the Lord during these trying times. “There is going to be a spirit of honor that is going to descend upon the house of God, and I am going to redeem the integrity of My people and My ministry”, says the Lord “and the house of God shall be known as a house of integrity and righteousness and power, sayeth the Lord.”

For so long, so many people have continued to bring their prayers to the Throne room of Heaven, believing that their needs would be heard. As Christmas continues to share this mighty prophetic word from the Lord, do not despair. “Starting now and continuing into the year of 2018, I am going to answer the long-term prayers of the righteous, both in the Spirit and in the natural. “For years,” sayeth the Lord “My children have prayed to Me, petitioned Me, and asked Me, and commanded Me, and yet I have been silent until they have wondered ‘God do you even hear us?’. Yes, I have heard you oh righteous children! And not only am I going to answer your prayers in the Spirit realm, and yes there is going to be revival, and glory and restoration” God says, “the year 2018 shall be a year of natural blessing upon the house of God.”

This prophetic word from Kent Christmas is so meaty and intense. You must surely hear it in its entirety as Christmas also prophesies about how the Lord is going to transfer businesses to those that have been faithful to the Lord. God is going to fully wipe out mortgages and keep disease and pestilence from His children. God is delivering His people from the spirit of heaviness that, for so long, has hindered His children. Allow this word to speak to your heart as you look to 2018 with great expectancy for what the Lord is doing, about to do, and so much more. Also shared in this segment: prophecy, prophetic word, Holy Spirit, Rock Church, Virginia Beach Virginia, conviction, lukewarm, deliverance, The Resting Place, a house of prayer, repentance, compassion, laborers, the Glory of God, the Glory of the Lord, the 7 mountains of culture, abundant financial resources, overcoming the attacks of the devil, wolves in sheep’s clothing, hierlings, boldness, the wealth of the wicked stored up for the righteous, mortgages, deeds, and the joy of the Lord. Greg and John shared in this segment.
screen capture from youtube.com/Rock Church