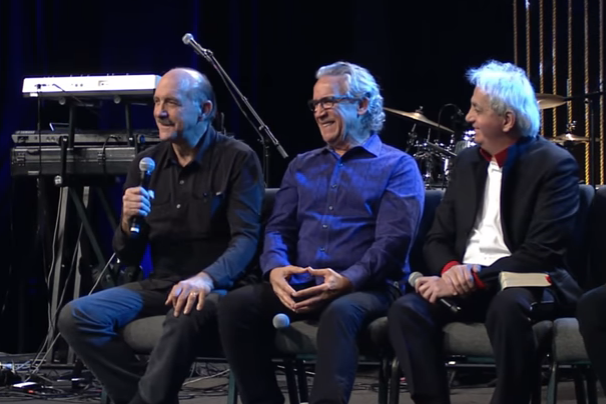 LISTEN NOW! WATCH FULL PROGRAM! Can you imagine God, the Creator of the Universe talking to you? Would you say, ‘oh that’s just God’? God speaks to us in dreams. So many people hear about how God is speaking and they say, ‘it’s just a dream’. We cannot respond to the voice of God this way. During a recent panel of Lou Engle, Bill Johnson, and Benny Hinn, Lou Engle was asked to expound about hearing God’s voice in dreams.

As Engle is asked this question, he cuts right to the core of the topic and points out these important words; “The last days language of the Holy Spirit is dreams.” When we comment saying ‘it’s just a dream’, we are dismissing the voice of God in our lives and in the lives of others. Engle asks this powerful question, “Who knows what angels had to fight through to break into your world, to give you their thoughts and you say, ‘it’s just a dream’? He continues by reminding us all, “I think the Church needs to stop saying ‘it’s just a dream’!’

When we spend time with Jesus, it is only a matter of time that we begin to hear His voice and His heart about that which is important to him. Engle points out that we need those around us who are also hearing the voice of God through dreams. “If you hang around the dream King, you get into a dream stream, you join yourself to a dream team, and you do the Martin Luther King thing.” Engle continues, “Every dream is a potential movement”. When we begin to look at dreams as the language of Heaven, we will receive more from these dreams as Heaven is intending for us to see them as. He highlights a recent dream that was given to Todd White that prompted White to adopt a baby. This caused Engle to realize “I see hundreds and hundreds of thousands of babies being adopted because of your story. Because a dream is like a seed. You stick with that dream long enough and it becomes a tree and you influence the world”.

Engle begins to point out the purposes of what dreams can impart to us when we see them as the Last Days language of Heaven. “Dreams are so profound, they give you divine intelligence, they give you the secrets for deliverance…you get inner healing in your dreams”. As Engle shares these profound revelations, he points to a journey that he experienced in his own life when meeting with teenagers in Taiwan. After an all-night prayer meeting, he received a dream from the Lord. “Why should we waste a third of our lives without the language of heaven bombarding us?”, Engle asks. He believed the dream he received would bring revival. But, to his shock and surprise, the next day, when he got up to preach, he was interrupted by a powerful move of the Holy Spirit that moved upon all of the teenagers. Engle didn’t preach a word. Then God spoke to him. “This will never be about your preaching. It’s what I’ll do when kids pray.”

As Engle continues this inspiring story, he continued to have meetings with these teenagers that were the Christian leaders in their schools. This was the beginning birthing of what is now known as “The Call”. It was this beginning process that birthed the reality of people standing before the Supreme Court with LIFE tape over their mouths, praying for abortion to stop in America. This was seen in a dream from God! As Engle describes it, “it was brilliant wisdom, because nobody can argue with silence…it’s silent prayer for those who have no voice. The media took it up and blasted it all over the world. They don’t like what we stand for, but they’re actually promoting the movement because we got authority over the media by divine revelation.”

This is so exciting! Acts 2:17 declares, “In the last days, God says, I will pour out my Spirit on all people. Your sons and daughters will prophesy, your young men will see visions, your old men will dream dreams.”

At the VFNDream Center, we don’t do anything unless God says to do it. God has shown us stadiums filled with multitudes of people crying out to God. We have family, spiritual mothers and fathers, brothers and sisters walking together. It is this unity of family that reveals how much the world is loved by God. If you don’t receive dreams in your night seasons, begin to spend time abiding with God and ask God to speak to you. When you receive dreams from the Lord, write them down and bring them to your pastor.

See the full discussion of the panel of Lou Engle’s powerful testimony and wisdom about dreams from the Lord, how our dreams can lead to mighty movements of inspiration for the Kingdom, and so much more. Also shared in this segment: Lou Engle, Bill Johnson, Benny Hinn, President Trump, The Supreme Court, ending abortion, Last Days Language of Heaven, angels, divine intelligence, inner healing, and adoption. Greg and John shared in this segment.
screen capture from YouTube.com/JesusImageTV