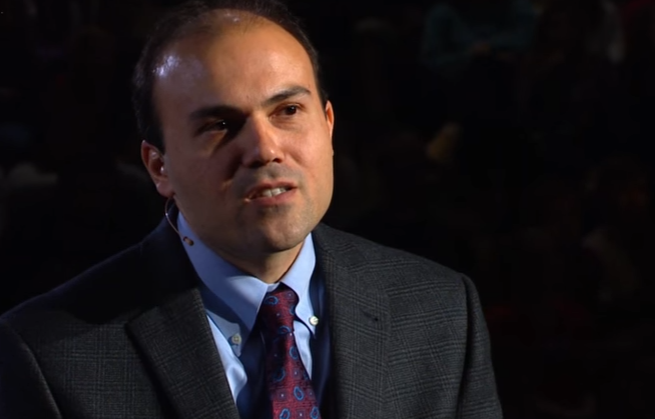 LISTEN NOW! WATCH FULL PROGRAM! We have continually been praying for the Persecuted Church throughout the world as well as bringing you updates about those throughout the Body of Christ that have and are enduring persecution for the cause of Christ. After enduring more than three years of persecution in Iran’s notorious Evin Prison, Pastor Saeed Abedini was released and traveled back to his family that was in America.

Multiple outlets have been monitoring and reporting the happenings of Pastor Saeed since he was convicted on January 27, 2013. CBN News has shared about his horrific journey of enduring Iran’s notorious Evin Prison. Pastor Saeed’s wife, Nagmeh shared that during his time in Evin Prison, “prison guards had become increasingly hostile reportedly tormenting the 35-year-old American Pastor with constant psychological threats.” Pastor Saeed has spoken about what has transpired since his release and he recently visited Liberty University to talk more in detail about his time of enduring persecution as well as how his journey has been since returning to America.

With a glowing smile on his face and hand waving to the many cheering in the audience, Pastor Saeed warmly greets everyone with his gentle humility and Iranian accent. “Good morning Liberty University. I’m so thankful that you have me here. As a witness of the strength of power of the prayer, we can see that no government, no official, no power can stop the power of the prayer of the Church.” With his continual words, he shares a beacon of hope for the Persecuted Church around the world as he continues, “…persecuted churches are alive and nothing can put them down, and the blood of the martyrs is the seed of the churches, and, uh, every time that they push us back, church arise, we get united, and we see the glory of God in it.”

Some may not know his journey of how Abedini came to the Lord. He was asked about his story and he shared how his powerful transformation unfolded. Pastor Saeed talked about his early upbringing, growing up in Islam, praying, fasting and reading the Quran. “But, to be honest with you guys, every time that I tried and tried, I didn’t have eternal peace in my heart.” During this season in his life he battled deep depression and tried to kill himself at the age of 20. He continued to seek God the best he knew how and was again challenged in his faith when an Assemblies of God pastor told Abedini “Jesus is Lord”. “What? Jesus is not Lord. Jesus is a prophet” was his response to this pastor. As he considered this new thought from the pastor, he shared what his initial intentions were. “So, I made a decision to kill that pastor before I kill myself.” That night he was at a new level of confusion. He continues to describe what he was going through.

“I was very confused. I saw that, uh, Muslim believes that Islam is the most completest religion in the world, but why I don’t have peace in my heart. And, the Christian, they said ‘Jesus is Lord’, they made a human as a Lord and worship him, which I can’t accept that. So, I was very confused. I was very sad about the situation that I was in.”

In this moment of questioning and looking for true answers, Abedini describes how he prayed a “normal prayer” once he arrived in his room.

“I got Bible in my one hand and Quran in my other hand, and I just kneeled down and started crying, ‘Lord, please show me which one is true, I’m confused. Both of them said that we are true and both of them have millions, billions of followers. I’m just 20 years old and I don’t know the reality of You. Just show me.”

“I woke up. It was like a bomb shaking the walls and I woke up. The voice, very strong, said to me, ‘Saeed. Saeed. I’m coming back soon. Go to preach my Gospel.’ And I saw a huge light in the room that I couldn’t see inside the light, and my body was shaking, my t-shirt, just in a second got wet, and I was so scared.

And, as the first time in my life that I felt the strong, heavy presence of Lord, that I couldn’t handle that. I said Amen. When I said amen, I could look at the light and I saw Jesus…the mountain was in front of my room window, which Evin Prison was under it…and I fell down like a dead person and I fell back to sleep.

And the day after that, I was somebody else. There was no hate in my life, and it was very clear how God in a human can be in one place, in one person, as Jesus Christ as a Lord and Savior. So all of my questions was answered. So I turned to Christ.”

Abedini continues to share how immediately began to obey what the Lord told him to do by sharing The Gospel. “I never went to Bible school, and actually until that time I never read my Bible, and so I just went to street, to parks, university, and start sharing Gospel with everyone that I saw, and nothing happened. No one believed me.” Amidst a repeated a lack of response to his message, he returned to the Lord in prayer about what to do. He describes what the Holy Spirit put in his heart “Don’t give up. Keep continue.” Slowly, people started responding and a small church began to gather. “And then we went to park and start praying, for a year, til 12 at night til 7 in the morning that God’s Kingdom come to Iran. We have just four, five young people. No future actually, no university, no money, no place to gather, nothing, but I just remember that verse in Bible: Seek the Kingdom of God, and all we be added to you. So we just make a decision together.”

It was in this steadfast devotion to the Lord’s promises that Abedini started to witness a powerful growth in the church. “And then I saw the churches was just exploding, increasing, 5 turned to 50, 500 to 5,000. And Now no one can number it.” What started with 5 ended up being 30 different churches in 30 different cities. It was at this moment of tremendous growth that the Iranian government began to get involved. “They took me to prison and court so many times. This time that I have been arrested was the 10th time that I had got arrested, and so the story of preaching, prison, preaching, prison was starting in my life.”

At first, the government relentlessly attempted to get Abedini to deny his faith. His steadfast devotion to Christ was more than they knew how to combat. Thus, they reeled back in their attacks to try and attack him with a new strategy. Recalling this journey, Abedini reminds us of the power of our faith. “You can see that Satan goes a step back when you stand firm in your faith, and then when they saw it doesn’t work, they start just stopping everything that I’m starting.”

Abedini was unshakable in his faith. When he was asked about what he had witnessed God doing during his time in persecution, he shared this inspiring response. “I’m actually very proud of our God.” What a humble, yet powerful truth! He continues, “Doesn’t matter what circumstances you go there, always your faith to Jesus Christ in the darkest place really works, and bring light in every darkness.” As he has spoken in multiple interviews about what he has endured for the cause of Christ, many have perceived Abedini as brave. But, as he points out, he is quite the opposite. “I’m a very fearful person, and because I’m a very fearful person, I’m always sticking to the feet of Jesus. Just don’t let me be alone here…”

While Abedini was in Evin Prison, he never let his circumstances dictate his purpose. Even while in prison, he shared the Gospel of Christ and turned Muslims to Christianity. It was only a matter of time before Evin Church was birthed amidst these victorious advances for the Gospel. Abedini still received torture but he relentlessly chose to love. As he describes a significant encounter with one of his torturers, he shares what his mission was. “And I just remember to say to him that everything that you do to me, the last day that I see you I’m going to hug you, and still I’m going to say I love you. You can’t push hate in my heart.”

As Abedini describes the momentous victories that have transpired in the Kingdom, and his release from captivity, there are still battles that Abedini is facing, in his marriage, and his life. When asked about his battles he points to the importance of embracing pressure. “When you go to pressure, and try to stay under this pressure to keep your faith, and obeying your calling that God gives you…I believe always there is a blessing behind staying under this pressures. And when you stay under this pressure until the end, you’re going to see at the end of the road Jesus hand is getting your hands, and shaking your hand, and giving you a hug. But you need to finish well.”

Be encouraged in your faith, revitalized in your prayers for the Persecuted Church, as you see an answer to your prayers for the Persecuted Church come alive to tell about the victories that God is doing in His Kingdom, and so much more. Also, shared in this segment: political power, friends, family, relationship, church plant, prayer, hope, long-suffering, and faithfulness. Greg and Steve shared in this segment.
screen capture from youtube.com/Liberty University