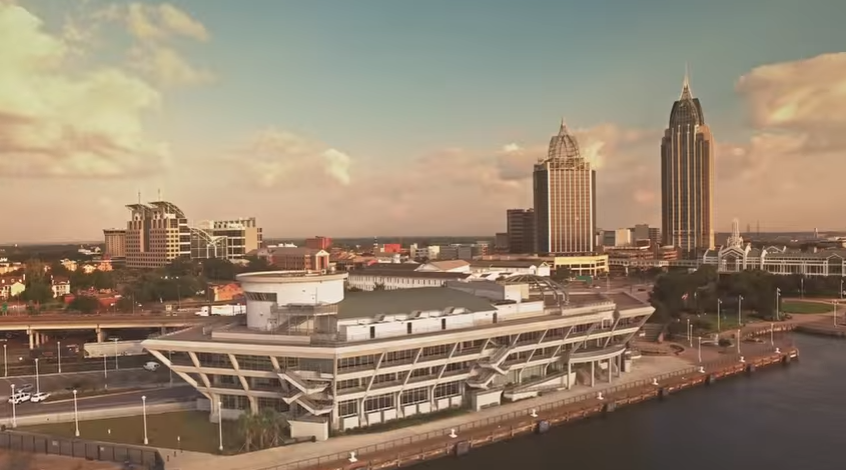 The day is fast approaching as registrations are already coming in and continue to come in to converge upon the streets of Mobile, Alabama under the Canopy of Prayer to pray over every street within the borders of the city of Mobile. For Him Films puts together an anointed orchestration of audio and video as they highlight just how urgent the need for prayer is in this critical hour. Many can attest to the environment of strife that has long existed in our nation. “Distractions, confusion, division…we try to look past it, but in reality, it’s ripping us apart.” For Him Films continues to share how this generation has a mounting responsibility. “This generation is facing a crisis. Many are turning their back on each other and on the Church.” What do we do about it?

Port of One is calling for every believer available to join in unity and prayer, to pray for the city of Mobile. “On April 29, 2017, we are calling every believer to the streets of Mobile. We want every area, every corner of our city to be covered by a massive Canopy of Prayer.” With continued hope, they share these words, “we can be a uniting force, prayerfully and strategically appealing to heaven for a Godly change in our city. We will be one family, one city, together who believe.” Now is the time to act and to be a part of history as the Church responds to the Spirit of the Lord and intercedes for an entire city. You can register now at Canopy.one.

This monumental event didn’t just get started on April 29th. Many came together, in the spirit of unity, to pray for Mobile, at the Saenger Theatre in Mobile for a night of worship with Bethel Music. Hunter Thompson and Kalley Heiligenthal led worship as the Spirit of the Lord moved powerfully upon those praying and interceding for the city.  The event was funded by local businessman, Fred Rettig, owner of Rettig Auto Body in Daphne, Alabama. This is what the Business Mountain is all about; using the blessings to fund and advance the furthering of the Kingdom of God.

This event not only involved people from the Church of many different denominations, as well as business men and women, but also governmental leaders. The Mayor of Mobile, Sandy Stimpson understands the urgency and need to pray for our cities and to give things to the Lord. Mayor Stimpson wrote a Proclamation of Faith and recently shared these powerful words by beginning how kings of old would do the same. “In days of old, kings and those in authority wrote Proclamations of Faith also known as decrees to unite the people and to provide focus and clarity and purpose, by acknowledging their Creator…” He continues to point out the desire that he wants for his city. “We desire to have true God-ordained unity, prosperity and growth in our community, with our full most hope being to have thy will be done for His Kingdom’s ultimate purpose…”

We do not want our words to fall upon empty responses. We want to see these prayers fulfilled with the footsteps of action and change to happen in our city. “…Now is the time in Mobile for unity to overcome division, for neighborly love to overcome envy and selfish ambition, for compassion to overcome condemnation, for humility to overcome pride, for prosperity to overcome poverty, for good health to overcome sickness, for joy to overcome sadness, for peace and harmony to overcome wrongdoing and misconduct, for faith to overcome fear, and for prayer to overcome worry.” At its onset, the Mayor thought this event would have to be carried out over a few weeks. But, after further consideration, he reasoned that this could be done in a single day. ‘There are enough God-fearing people in this city that can carve out just a few moments to walk their street, or their neighbor’s street, and sign up and say, ‘I will walk the streets of Mobile, praying for God’s divine intervention.’’

When we see this powerful prayer and action taking place in Mobile, Alabama, we can have the same faith and confidence to believe God to do the same in our city, and every city in the nation! When you register at Canopy.one, you can see another blue pin added to the list and the covering of the Canopy of Praying taking place before your very eyes.

The City of Mobile has already begun to see a powerful journey of transformation through the continual prayers of intercessors for their city. As revival was breaking out in various areas throughout the world and the nation, more than 20 years ago, the residents of Mobile desired a mighty move of God to take place in their city. Motivated by what they had seen and been hearing, leaders throughout the city gathered together to write down what they believed God for. “It was prayed over and placed in a high place in the Mobile skyline.” Only a handful of years later, the city of Mobile turned national heads. “Three years later, the national media declared Mobile a ‘city of refuge’ to those escaping the wrath that Hurricane Katrina had dealt to the New Orleans area; and today, the Port of Mobile is listed as one of the top ten ports in the United States.” In addition, multiple industries have experienced massive growth and future advancements are coming to Mobile’s economy because of these faithful prayers.

When we look at this powerful journey of transformation, it stirs all our faith and hope for what God can do. When we look at other testimonies of God’s faithfulness to transform cities, we begin to see just how powerful our prayers are. Transformations is a powerful documentary that visits the journeys of four different cities and what transpired when the Holy Spirit took over the cities.  When we see these realities, it stirs our faith to believe God to do the same in Mobile. Be a part of history and set your reminder today to be there on April 29th as many gather in Mobile, Alabama to pray and believe for God’s Kingdom to come. Register now!

Be encouraged as you are reminded of the overwhelming power of our unity and agreement when we come together seeking the heart of Jesus Christ for an entire city, to see this city changed forever, and so much more. Also, shared in this segment: Canopy of Prayer, For Him Films, Bethel Music, The Bridge, Fred and Barbara Rettig, intercession, petition prayers, declaration prayers, hope, AirBus Assembly Line of Mobile, Austal Production Facility, spiritual warfare, and The Holy Spirit. Greg and John shared in this segment.
screen capture from youtube.com/Visit Mobile

“We’d like to thank Stephen & William Braswell – For Him Films of Mobile, Al, for their amazing ability to film high quality work, that puts a smile on hearts and which makes such a powerful impact on those who get  the opportunity to see their work!  Don’t miss any opportunity you can get to work with them.”
Related Content
For Him Films

Port of One
PortOfOne.org
Canopy of Prayer – Mayor Sandy Stimpson
Sandy Stimpson,
Mayor of Mobile, Alabama
Canopy of Prayer – April 29
Canopy of Prayer – Full Story
Volunteer for Canopy of Prayer
About Canopy of Prayer
Bethel Music
Rettig Auto Body
Austal Production Facility in Mobile, AL
Airbus Assembly Line Mobile, AL
Transformations: A Documentary Trailer
iAbide.org
Emmaus Road Discipleship
MeetMyFather.org
Partner Now
with VFNtv
VFNKB.org
The Commanded Blessing
Psalm 133
Related Articles
Jesus and the Great Expectation; Then they WENT OUT
The Gospel, The Commission: Our Privillege
The Protocol for the Coming Outpouring of God’s
Spirit
“The Anointing is on You for Your Assignment!” says
Lance Wallnau Advancing the Kingdom of God by Conquering the 7 Mountains of
Culture!
Are You Prepared for God’s Suddenlies? An Outpouring
is soon Upon Us
“CAN YOU BRING GOD INTO THE WORK PLACE?” FORTUNE 100
CEO & U. S. CONSTITUTION SAYS YES! FRED SIEVERT TELLS ALL ABOUT IT IN HIS
BOOK “GOD REVEALED”
There is Something Special When the Church Comes
Together as Family
American Christians Using the Wealth, Resources,
Innovation and Freedom to fulfill The Great Commission
Making Disciples in the 7 Mountains of Culture
7 Mountains of Culture: Empowering Governmental
Leaders for the Hard Work Ahead
WATCH! Reclaiming the 7 Mountains of Culture Arts,
Entertainment and Media; Impacting our Culture for the Cause of Christ
Preparing to have Impact in the 7 Mountains of
Society
Having True Impact for Jesus in the World we LIVE
in: Declaring Jesus is Lord over All 7 Mountains of Society
Called to Transform the Culture
Let’s Not Walk Off the Mountain Leaving Our Place of
Influence for God: Let‘s let Our Light Shine
You are Called to Be a GAME CHANGER in Society!
Right Where You Live, Work, and Play: Kingdom Impact
#VFNtv
M1O2U3N4T5  G1O2V3E4R5N6  F1A2M3I4L5Y6
F1A2I3T4H    H1O2P3E  E1N2T3E4R5T6A7I8N9
R1E2L3I4G5I6O7N8   E1D2U3C4A5T6E7   M1E2D3I4A5
B1U2S3I4N5E6S7S8   C1I2V3I4L5   S1P2I3R4I5T6
C1H2U3R4C5H6   G1L2O3R4Y5