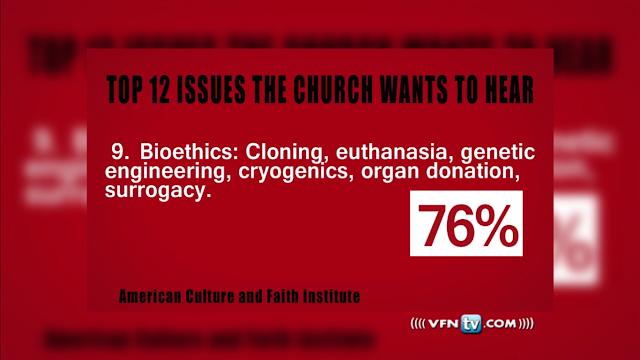 George Barna, with The Barna Group, surveyed Christians asking what they wanted their Pastors to speak about. The released results had some surprising responses! Those that were surveyed, 72% wanted to hear about Islam. What are the core beliefs of Islam? This was # 12 on the list. As a Christian how do you respond to Islam? On VFNtv we talk about different religions including Islam, so you can be educated and understand how to respond to Islam. Of the American Muslims, 52 % agree with a forceful takeover of the U.S Constitution to enforce Shariah Law. We need to know the differences between religions. There are only about 4 million Muslims in America, and the media is making a big boast of the Muslims that are living in America. How it has been talked about on media you would think that number would be greater. At # 11, 73% said that wanted to know: What is the role of The Church in Government? The First Amendment was created to keep the government out of the Church, not the Church out of government. People are wanting their Pastors to teach them about Church, Politics and Government. We are about freedom of speech in America! The next desired topic of discussion is at #10, 75% want to know about Self Governance. Many people are trying to find some hero to come in to rescue them, but America is about all of us working together doing our part. As Christians we need to be a disciple of Jesus, we are held individually accountable before Him for our lives. God expects us to govern our lives according to His word. You can learn more about discipleship at Emmaus Road Discipleship.

At #9, 76% want to know about Bioethics: Cloning, euthanasia, genetic engineering…, many people are trying to live a longer life on this earth, but life is a vapor and as believers we should be teaching about eternal life. At #8, 76% want their Pastors to discuss the Role of Government. Americans need to learn our history. It is very important to understand the role of government, which you can learn from the history of America and where we came from. The next issue at #7, 79% want to know more about Christian Heritage: role of Christian faith in American history, church role in U.S. development…, many of these topics are discussed on VFNtv. David Barton, talks about our Christian heritage in his, American Heritage Series, and does a great job at explaining it. As a Pastor you can get these DVD’s from David Barton and use those to educate your congregation about this topic or even as an individual this is a great series to buy as well. At #6, 80% want to hear about Israel: It’s role in the world. Christian responsibility to Israel, U.S. foreign policy toward Israel and its enemies. If you don’t hear about these topics from your Pastor, you can go to The Torch and find out more about Israel which we have over 600 segments with related content on Israel and much more. We need to have a biblical perspective of Israel to understand, because we as the Church will be held responsible for what we did and did not do. Genesis 12:3 “I will bless those who bless you, and him who dishonors you I will curse, and in you all the families of the earth shall be blessed.”

The next topic is #5, 82% want to know about Sexual Identity: Same-sex marriage, transgenderism, marriage, LGBT. Christians are wanting to hear about this from their Pastors so that they can respond from a biblical viewpoint. God didn’t call us as the Church to change the world, but He called us to win the world over to Him. You can find out the remaining topics discussed in our related content and much more. We want to hear from you and what you think about these topics. Also, we have an action plan for you that you can take to your Pastor showing that you want to hear about these topics at your church. Also shared in this segment: George Barna, America, tax-exempt status, religion, The Constitution, Caliphate, Glenn Beck, repentance, John Piper, The Christian Post, The Inquisition, The Pope, Thomas Jefferson, David Barton, Iran, Israel, Tel-Aviv, Christians United for Israel (CUFI), Japan, racism, homelessness, abortion, persecution, poverty, Gideon, Fox News, relationships, and community. Greg and John shared in this segment.

6.Israel: It’s role in the world, Christian responsibility to Israel, US foreign policy toward Israel and its enemies