WATCH! Preparing for the Great Harvest of Souls 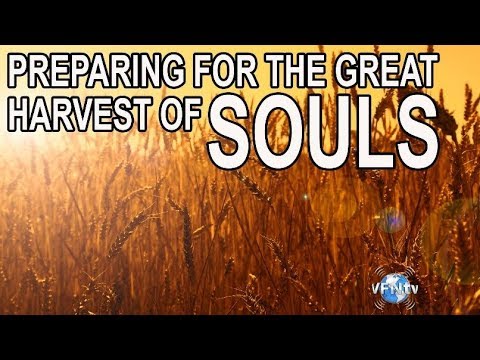 Preparing for the Great Harvest of Souls

We continue the discussion about the Third Great Awakening that is coming soon. At the passing of Roe v Wade and legalized abortion in January 1973, began 40 years of judgment against America of God moving in signs and wonders. At that time Gordon Lindsey, who founded Christ for the Nations, died two months after Roe v Wade which was another sign of the stopping of signs and wonders. January 2013 was 40 years, and it has been very encouraging of great things happening in the Church, and it is exciting for the signs, wonders, and miracles that are coming! Dive into the river of God and don’t miss out on this new season God is bringing in. A Tsunami of God’s glory is coming, and it is time for us to get ready!

Dutch Sheets says, “The war eagles are coming,” and that the people of his generation may have worries about how they are going to disciple this new generation that is coming to the Lord. At VFNKB we have been preparing for the harvest that is coming in. In this generation many are fatherless, and they will need to be fathered and raised to be who they were created to be.

There are seasons in the Kingdom of God, and when God begins to do a new thing as believers, we need to shift into the new season. God is a moving God, and you can read the Bible and see many times where God moved and changed the times and seasons His people were in at those times. Dutch says, “Changing times and seasons require changing strategy.” When God begins to do things, He will say what He wants us to do as His children. Get in the river and build your foundation now. You can find the full prophecy in the related content. We want to hear from you and what you think about this new season that is coming. Also shared in this segment: Dreams, Abortion, Church, Discipleship, Wine Skins, Stand in the Gap, Apostolic Centers, Salvation. Greg, Pat, and John shared in this segment.