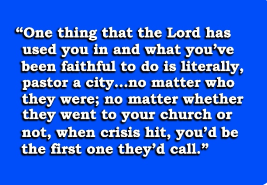 It is such an encouraging breath of fresh air to have a conversation with those who are down to Earth and humble. Jack Hollis is one of these men and his life is a wonderful, joyful testimony of the faithfulness of the Lord. Greg Lancaster was recently honored to be able to sit down with Jack and take the time to talk about some of the wonderful miracles that the Lord has done through Jack’s life. It is such an honorable to recognizable moment when someone has the heart desire to pastor God’s flock, to care for them, and demonstrate the love of the Lord to each of them. Jack has been a pastor in his hometown of Marianna, FL for decades, and has had such an influence upon his community, as Greg shares, he has “one thing that the Lord has used you in and what you’ve been faithful to do is literally, pastor a city”.  At his recent birthday celebration, Jack’s son Quinton recognized the profound impact that Jack has had upon his local community; “no matter who they were; no matter whether they went to your church or not, when crisis hit, you’d be the first one they’d call”. Even when Jack and wife Shelly were financially broke themselves, they did all they could in those moments of need for others to help them pay their utility bills or to help them with rent. What a beautiful moment demonstrating the love of Jesus to those around us! 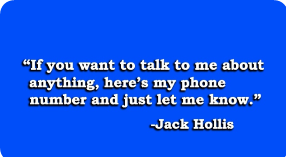 As Greg continues to point out, Jack is a man who continually demonstrates his heart of gratitude to those around him, he doesn’t keep it in his heart. When Jack walks past a table of law enforcement officers, he makes sure to take the opportunity to express how grateful he is for them AND to pay for their entire meal. What may seem like a simple act of kindness and generosity has the potential of changing someone’s life. As a former law enforcement officer himself, Greg empathizes the profound influence of those actions. “Being former law enforcement…very few people do that…It was so depressing some of the things that we had to do in law enforcement, to have some kind words, or an extra helping of this, or ‘we appreciate you’, it just changed everything.” Not only did Jack continually love on his community around him, but also continually spoke at the local university for the Baptist Campus Ministries and Fellowship of Christian Athletes events.

Jack recalls one particular moment speaking at an event that he recalls many of those who were present “went to church”, but yet they had never given their lives to the Lord. He knew that being able to connect with them personally would have an impact on them. “If you want to talk to me about anything, here’s my phone number and just let me know..”  After following the leading of the Lord and sharing a prophetic word for two young athletes who were present that day, they made sure to express to Jack that they had taken down his phone number and would be calling him. As Jack says, “that’s what it’s all about”. In those moments and years, his devoted wife, Shelly, would be faithfully ministering alongside him to all of those who were in need. There was such a hunger for the love of God, that Jack recalls being able to minister the Word of God for 9 hours straight and people would faithfully attentively listen.

The Wonderful Blessing of Having Faithful Friends in Our Lives