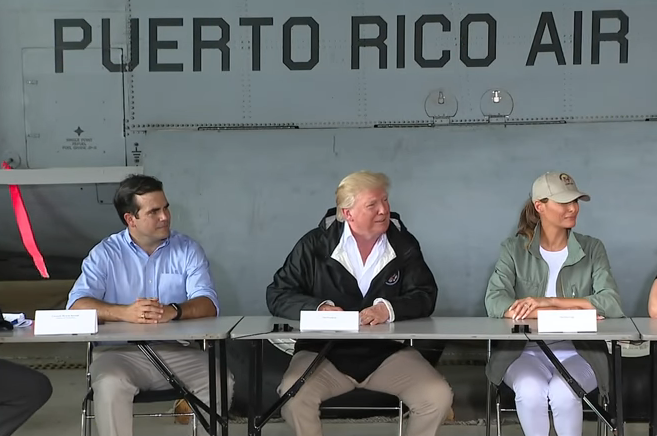 LISTEN NOW! (Or WATCH FULL PROGRAM!) While devastation and tragedy is happening throughout mainland America, it is also happening on the island of Puerto Rico. As many are still recovering from Hurricane Harvey and Hurricane Irma, Puerto Rico suffered massive destruction when Hurricane Maria made landfall as a Category 5 Hurricane. Some may not fully understand the wide spread devastation that has taken place throughout Puerto Rico because of Hurricane Maria. A recent report done by Vox, describes the overwhelming effects that have taken place.

Puerto Rico has its own power grid, and, thanks to the Hurricane, that has now been completely wiped out. As Vox explains, “now it’ll be months before most of the island has electricity again”. What’s additionally complex about the situation is the lack of finances its government has to rebuild. As the report continues, “The island’s economic downturn can be traced to the 1960s and 70s, when a special tax break from Congress led US companies to set up shop in Puerto Rico. Then, between 1993 and 2006, Congress phased out those tax breaks, and companies left the island in droves, taking thousands of jobs with them.” With a present debt of more than $70 Billion, and citizens leaving the island in droves, problems are increasingly mounting. But this is only the beginning of hardships the island faces.

“Since Puerto Rico imports 85% of its food, people often pay double for food and other basic necessities. The high cost of living is one of the reasons 43% of residents live in poverty.” With this in mind, it is easy to understand why many are leaving the island to find solace in mainland America. This also includes the many workers of the island’s main power company, PREPA. ” Since 2012, 30 percent of PREPA’s employees have retired or left for the mainland in search of better jobs. Electrical engineers from Puerto Rico can make about 27 percent more money on the mainland. According to its director, “PREPA is on the verge of collapse because there’s no personnel to operate it.” To add hardship to heartache, all of this was taking place before Hurricane Maria.

In response to the devastation that has taken place throughout the island of Puerto Rico, President Trump recently visited the island, along with many other governmental and military leaders, in a round table-like fashion, to coordinate resources and organization to the many needs taking place. As the President begins to speak, he is quick to give thanks to the many leaders in various roles that have helped respond to the devastation in Puerto Rico. Brock Long, Administrator of FEMA; Elaine Duke, Acting Secretary of Homeland Security; and Jenniffer González-Colón, Puerto Rico’s Congresswoman, were just a few notably mentions that the President gave special thanks to.

During repeated occurrences, many of those who spoke made special note to the many DOD representatives who were on the ground in Puerto Rico to provide needed resources. Congresswoman González-Colón captured the scene best with these words; “More than 4,000 people were here in the island from the different branches of the military — HHS, Navy, Army, FEMA — and all the staff working together before the hurricane hit. They were here before, during, after the first hurricane, and they continued to stay on the island, boots on the ground. During Maria – same thing.”

The President continues to speak about Puerto Rico’s effects, he speaks with words of optimism and gratitude, considering the possibilities of how it could have been worse. “But if you look at a real catastrophe like Katrina, and you look at the tremendous hundreds and hundreds and hundreds of people that died, and you look at what happened here with, really, a storm that was just totally overpowering — nobody has ever seen anything like this.” With a confirmed death toll of 16, he compares this to the thousands that have taken place in recent natural disasters. “Everybody around this table and everybody watching can really be very proud of what’s taken place in Puerto Rico.”

The President turned his attention to the many leaders of the Armed Forces and began to give special attention and thanks to their hard work and efforts. With resources numbering in the thousands, and runways being opened to make them operational, making supplies available to residents is now a reality. It is such a beautiful sight to see the President on the front lines of response, speaking face to face with the leaders of the people who need help in these dire circumstances, and bringing those who can coordinate the many resources that are so desperately needed.

Operation Blessing has also responded to the island of Puerto Rico, as they have first-hand experience in providing help to others in situations like this tragedy. “Operation Blessing is partnering with one of the first bakeries to reopen after the hurricane, and making bread for the people.”  The manager of the bakery, Debbie Perez, understands its more than just bread; it’s about bringing hope. Many of these people can prepare their own foods in the house. Or, because they have no electricity, there’s no water, no gas. And, we have the opportunity to bless these people, and that way, we feel blessed to.” In addition, Operation Blessing is partnering with the mayor of San Juan to provide solar power lights so that people can have light in the midst of darkness. In her own words, the mayor shares these impactful words of gratitude; “I think for me, the great take away is that nobody called you. No one called you. You just came…Thank God for using you to give us hope.”

It is important that we not simply move on in our daily lives with recognizing the hardship and devastation that is taking place in Puerto Rico. There is so much pain in many hearts throughout Puerto Rico as simple needs, such as food and water are deeply needed. See the full conversation of what is taking place in Puerto Rico as you see President Trump coordinating with governmental and military leaders, Operation Blessing working with locals to provide basic needs, and so much more. Also shared in this segment: Hurricane Maria, Puerto Rico, American Territory, Puerto Rico power grid, Vox, effects of Hurricane Maria, President Trump, The White House, Trump Administration, General Kelly, Category 5 Hurricane, FEMA, DHS, Marines, Air Force, Navy, Coast Guard, Hurricane Katrina, Operation Blessing, prayers, Hurricane Irma, crisis, relief supplies, and serving. Greg and John shared in this segment.
screen capture from youtube.com/The White House