Worship on the Pitcher’s Mound, R. A. Dickie 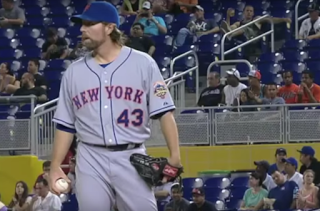 LISTEN NOW! John shares about how R. A. Dickey, the pitcher for the New York Mets, says that he worships God when he pitches from the pitcher’s mound.
screen capture from youtube.com/MegaHighlightVideos

New York Mets pitcher R.A. Dickey at age 37 is a first-time All-Star but a long-time member of West End Community Church in Nashville. A literature major at the University of Tennessee, he names his bats after literary weapons such as Hrunting, a sword in the epic poem Beowulf. Dickey languished in the minor leagues from 1996 to 2007, when he almost drowned trying to swim across the Missouri River. That became a turning point in his career: That year he mastered the knuckleball, which is ideally thrown without spin so that slight air movements over the ball’s stitched seams cause it to move in erratic and unpredictable ways.

In your recently published autobiography, Wherever I Wind Up, you’re explicit about how God saved and changed your life. Journalists have interviewed you a lot over the past several months. What percentage of the interviewers have asked about your Christian faith? Probably 15 to 20 percent. read more