Hurricane Sandy shuts down NY Stock Exchange: only the 2nd time since 1888

LISTEN NOW! Greg and Pat discuss how Hurricane Sandy shuts down the NY Stock Exchange.  This is only the second time in history the stocked market has been shut down as a result of the weather.  The last time this occurred was in 1888.  They continue to share how Woodrow Wilson was selected to run for the office of the President.  During his time in office he was responsible for the League of Nations that was the blue print for what we have now in the United Nations.
President Woodrow Wilson felt the problem with America is that we needed a bigger government to meet the needs.  The answer that materialized was bigger government.  Allegedly Woodrow Wilson got the U.S. involved in the WWI to get a customer based back that we lost because of the war.  The customer base was to raise money for his idea that bigger government is the answer to the problem America was facing at that time poverty being one of them.  It was all about money.  He developed a plan so this would have happened again by creating the League of Nations, a way to mix the nation’s money, with the idea that nations would not fight each other because they would be affecting each other’s economy.  The whole idea was based on the government supplying all our needs rather than turning to God.   The big turnaround for our nation is not bigger government.  It’s for the preachers in our nation to preach the gospel.  We need to show the way by us repenting first.  The dots connect and here we are today having faced a super storm that has half of Manhattan flooded in the city where the United Nations is located.  Is there a clue for us in all this?
Greg shares the wrong year regarding the last time the stock market was last closed due to weather.  However what was said in regards to President Woodrow Wilson is still relevant in the context that it was shared. 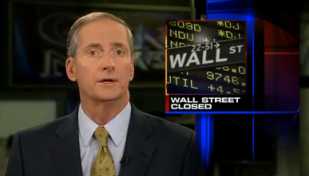