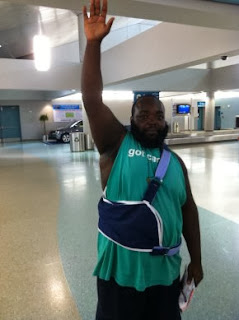 LISTEN NOW! Greg, Pat and Steve continue to share about what God has been doing in their midst. While Steve was working at the airport, a man came up to his counter for help. Steve noticed that he had a strap over his right shoulder. During the conversation, Steve looked more closely and realized that the man had his arm in a sling. Brian had torn his rotator cuff while playing football just days ago. Steve began sharing glory stories of how God had healed his roommate of an injured shoulder.  As Brian’s faith was stirred and lifted, he asked Brian if he could pray for him. Brian said yes. Steve placed his hands on Brian’s shoulder and declared complete healing over Brian in the name of Jesus Christ. Steve said to Brian for him to begin moving his shoulder in faith. Gingerly he did so. After asking Brian where it hurt and to describe the pain, Steve prayed again, this more specifically. Steve asked Brian to move his arm in faith and Brian moved his arm like a windmill. It was completely healed. WHAT IS THIS?  IT’S THE GLORY OF GOD!!