LISTEN NOW! The vitality and urgency of the present state of Israel and the importance of events occurring that involve Israel cannot be understated. In an interview with Israel’s Ilana Dayan and Channel 2 News, President Obama sits down in the White House to discuss the relationship with Israel’s Prime Minister Benjamin Netanyahu and the events involving Israel.

President Obama has expressed his unequivocal stand with Israel and to provide security and support, but there appears to be a stark contrast in the actions that are carried out. Currently, America is at the negotiating table with the nation of Iran and their nuclear development program. It is this nation that has repeatedly and openly called for the annihilation of the Jewish State. With this awareness, it is simple to understand Israel’s drive to want to ask a few direct questions to the President. Dayan brought to light the recent words of the President regarding the Prime Minister’s desires and actions for the peace of Israel.
Israel has made repeated concessions for the glimmer of hope for peace to come with Israel’s Palestinian neighbors and the relationship with them regarding a 2-state solution. This has been a continual matter of national urgency for the nation of Israel and the Jewish people. Dayan again reiterates some of the President’s past quotes: “You said, ‘Nothing comes to my desk that is perfectly solvable and you said any given decision I make will wind up with a 30-40% chance that it isn’t going to work”. In response to this, Dayan revealed a dramatic reality for the Israeli people when she said, “I’m afraid that Israel cannot afford even 3-4% chance that you are wrong, because if you are, the bomb will hit Tel-Aviv first.”
There appears to be differing perspectives of these issues from the President’s view versus the view of Israel and the Israeli people. What is the perspective of the Israeli people? CBN is reporting how the author of the book Catch the Jew, Tuvia Tenenbom, is bringing to light the dramatic pressure and rise of anti-Semitism (racism towards the Jews), occurring and spreading across the world. According to CBN, “Anti-Semitism is alive and well in Europe, with attacks in France and Austria doubling since 2013.” In addition, according to Tenenbom, “European governments back organizations that claim to help Palestinians but their true goal is to create friction and chaos.” Tenenbom set off to get a response from the Middle Eastern and European world regarding Israel and the Jewish people. When he posed as a German, empathizing with those who were not for Israel, the responses he received were stunning, with one man denying the existence of the Holocaust.
It is easy to see the vast chasm of differing urgencies that are expressed between the President and the Israeli people regarding the peace and security of Israel. It is imperative that we grasp and embrace the importance of these matters as the Israeli citizens do. Watch the full interview that took place with the President, more of the realities that are taking place within Israel and around the nation of Israel, and so much more. Also shared in this segment: Israel, America, Anti-Semitism, Racism, Golan Heights, Gaza Strip, two state solution, peace agreements, nuclear negotiations, Iran, trembling cup, land grab, middle east, European, Catch the Jew book, CBN, holocaust. Greg and John shared in this segment. 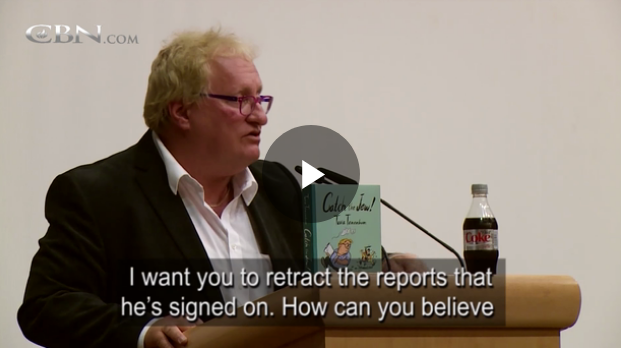