Iran Nuclear Deal DONE? What does this mean for ISRAEL? Will Israel Deliver on their Promise to not allow Iran to have Nuclear Weapons?

LISTEN NOW! or WATCH FULL PROGRAM! It has been talked about; warned about; and now it has happened: President Obama has signed a nuclear deal with Iran. President Obama addressed the world this morning when he gave voice to the very actions that were done. “Iran must abide by the deal before additional sanctions are lifted; including 5 year restrictions related to arms and 8 years for restrictions related to ballistic missiles. I will veto any legislation that prevents the successful implementation of this deal.” As President Obama shared his remarks about the outcome of this deal, Prime Minister of Israel, Benjamin Netanyahu, also shared his response as well.
“..I will commit on the details of the agreement as they emerge, but I’d like to say – here and now. That whenever there is a readiness to make a deal at any cost, this is the result. Judging by the initial reports that have emerged, one can now reach the conclusion that this agreement is a historic mistake for the world. In every area that was supposed to prevent Iran from gaining the capacity to arm itself with nuclear weapons, far-reaching concessions were made. In addition, Iran will receive hundreds of billions of dollars which it can use as a means to fuel its terror machine, its aggression, and its expansion in the Middle East and throughout the world. It is impossible to prevent an agreement when those negotiating it are willing to make more and more concessions to those who during the talk are chanting ‘Death to America’. We knew very well that the desire to sign an agreement was stronger than anything else, so we did not promise to prevent an agreement. We did promise to prevent Iran from arming itself with nuclear weapons, and this promise remains valid. I’d like to say to all of the leaders in Israel- Now is the time to put aside petty politics and unite around the most fateful of issues for the future and security of the State of Israel…”
-Prime Minister Benjamin Netanyahu
The deal that was signed is providing $100 Billion into the hands of Iran; which is an enemy of God, an enemy of Israel, and an enemy of America. Iran is also the nation that conducted military operations of blowing up a mock American aircraft carrier. Regardless who is standing with Israel, and who is not standing with Israel, Israel is going to defend herself. As the Church, we must stand up and voice allegiance with Israel.
Some may remember the film maker Dinesh D’Souza and the movie he released about President Obama: 2016 Obama’s America. With the many actions and decisions that our current administration has made involving the allies and adversaries of America, one may sense a “double standard”, as D’Souza describes it, as to how some events were handled. When this movie was released in 2012, many may not have foreseen what we are witnessing today. D’Souza made some profound predictions that we are seeing played out. Why does it appear that America is undermining its allies and allowing their adversaries to remain in power? According to D’Souza, that is the goal. “Obama wants global redistribution…Obama wants to shrink the influence of American foreign policy.” It was also the current administration that threatened Israel regarding a third Intifada. God has revealed intricate dreams detailing the outcome, for the Church, when John Kerry was established as the Secretary of State.
If we do not raise our voices in support of Israel, that is a decision. If we remain silent in a critical hour such as this, that is a decision. Joel 3:2 says, “I will gather all nations and bring them down to the Valley of Jehoshaphat. There I will put them on trial for what they did to my inheritance, my people Israel, because they scattered my people among the nations and divided up my land.” It matters how we respond, or how we do not respond to the Jewish people and to the land of Israel. Allow your faith to be emboldened in this critical hour, be aroused from the slumber of today’s comfort as you see the urgency of what is happening in our generation, what to do about it, and so much more. Also shared in this segment: Iranian Nuclear Deal, President Barack Obama, Iran, Prime Minister of Israel Benjamin Netanyahu, Hamas, terrorism, war, aircraft carrier, centrifuge, 2016, Dinesh D’Souza, atomic bomb, Pastor Saeed Abedini, John Kerry, Libya, Khadaffi, Egypt, Adolf Hitler, urgency, repentance, and prophecy. Greg and John shared in this segment. 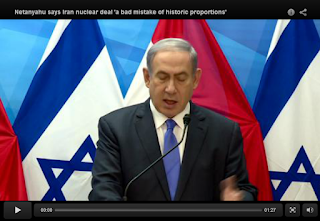