NBA’s Dwight Howard, of Houston Rockets Shares His Powerful Testimony of His Relationship with Jesus Christ 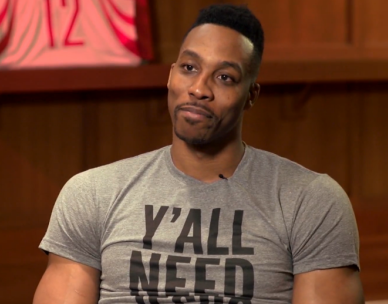 LISTEN NOW! WATCH FULL PROGRAM! When Dwight Howard was drafted from high school to take part in the National Basketball Association (NBA), his mission when he stepped on the court was this, “…to preach God’s word, you know, in the NBA,” says Dwight. “Use the NBA as a platform for God. And when I’m on the floor, you know, let people see, you know, the God in me.” The atmosphere and culture of the professional arena isn’t without temptation. After sharing with many his Christian faith, he found himself in the reality of being a father, and not married.

He received much heat from his teammates during this moment in his life, but he remembers how God led him through. “The minute I messed up, the minute I sinned, everybody took a shot at me, ‘man you supposed to be a Christian’. But, Jesus died on the Cross for our sins. So, if He’s willing to forgive us, why can’t we forgive each other?”

After finishing up his time with the Orlando Magic, being traded to the Los Angeles Lakers, Howard is now breaking franchise records with the Houston Rockets. These transitions did not come easy. When Lakers fans responded negatively to his departure, Howard again shares how he felt in these moments. “And now everybody hates me again. I’m like oh my God, like God, like please, just do something. And He said, ‘listen, if the whole world hates you, I love you. Always remember that.’ So I just tried to put away all the hate and everything like that and just focus on my relationship with Him.”

The testimony of Howard is continuing to send shock waves of light and God’s forgiveness for all the world to see as well as other Christian athletes like Tim Tebow and Jeremy Lin. Watch this personal testimony as you hear about God’s forgiveness, His faithfulness, and so much more. Greg and John shared in this segment.
screen capture from cbn.com

Related Content
Dwight Howard Gets Real About Being a Christian in the NBA
iAbide.org
MeetMyFather.org
Partner with VFNtv