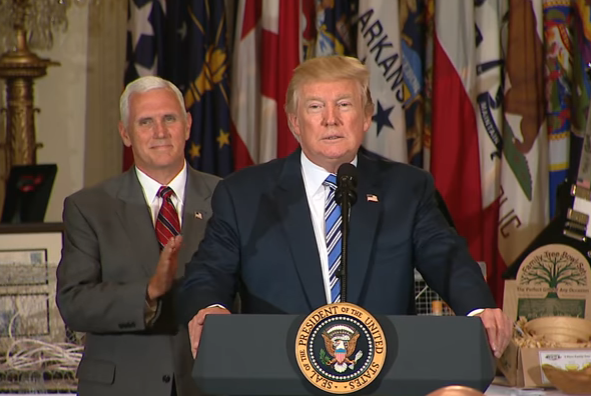 LISTEN NOW! (Or WATCH FULL PROGRAM!) This is such an encouraging moment in America. During the last eight years, it appeared as if one couldn’t bring up America, the values of America, or their stand with the Founding Fathers, it was seen as a bad thing. There has been a magnificent shift in America. President Trump has continually exemplified what we look for to be hopeful and inspiring. He recently hosted countless business leaders and representatives to display their products throughout the White House to celebrate the ingenuity and creativity of businesses in America that are “American Made”.

Vice President Pence began sharing the tremendous gratitude that the Trump Administration has for all of America’s workers and businessmen and businesswomen who make these products a reality. “It’s the greatest privilege of my life to serve as Vice President to a President who always puts America First and puts American manufacturing first. Our President knows that America is a nation of dreamers and doers, a nation of producers and growers and makers.” As Vice President Pence has seen first-hand in these beginning months of Trump’s Administration, outstanding actions have been made for the betterment of the American business owner. “And since the very first day of this administration, we’ve taken decisive action to promote and protect what he calls those three beautiful words: Made in America. In fact, this President has signed more laws slashing through federal red tape than any President in American history.”

President Trump has continually commented on America’s dealings with nations around the world regarding trade will once again put America first. Vice President Pence shares some of the recent breakthroughs that have taken place in trade. “Under President Trump’s leadership, we’ve been fighting for trade that’s both free and fair so that American businesses and American workers can compete and win with companies anywhere in the world. In fact, as we were just talking down the hallway, just last month, thanks to the President’s leadership, American beef is now being shipped to China for the first time in 13 years.” These are such hopeful realities taking place within our nation that will add many jobs. As Vice President Pence continues to describe the many changes that are affecting a multitude of industries, optimism is reaching new heights that have never been imagined.

As President Trump began to share, he highlighted how this “Made in America Week” is about returning the ‘old days’ of remembering the greatness of America, and the many products that are produced in our homeland. “We’re here today to celebrate American manufacturing and to showcase the amazing products from all 50 states, made in the USA. Remember in the old days they used to have “Made in the USA”, “Made in America”? But made in the USA. We’re going to start doing that again. We’re going to put that brand on our product because it means it’s the best.” As wonderful as it is to see the many hardworking men and women produce so many products, the President has higher expectations and a hopeful vision for the days ahead.

“We want to build, create, and grow more products in our country using American labor, American goods, and American grit. When we purchase products made in the USA, the profits stay here, the revenue stays here, and the jobs — maybe most importantly of all – they stay right here in the USA…I want to make a pledge to each and every one of you: No longer are we going to allow other countries to break the rules, steal our jobs, and drain our wealth.”

As the President addresses, the coming change and shift that he sees will be reached with a simple understanding. “Clearly, it’s time for a new policy — one defined by two simple rules: We will buy American and we will hire American.” The President also addresses how his actions are benefiting companies in America. “My administration is removing the burdens and regulations on your companies so that you can compete, thrive, and grow.” So many businesses have felt the waiting period of timelines of permits. President Trump explains how actions are changing all of this. “So, a lot of those regulations have been taken off; the rest are coming off. And, by the way, we will have better protection than we’ve ever had, but we’ll also have something where you don’t have to wait 15 years for a permit and then when you go to the board, you lose. And that’s a big portion of your life wiped out waiting for a permit. We’re not going to let that happen.”

As the President re-addresses the need to overhaul the trade practices with America and the nations throughout the world, he also points to certain practices taking place within our nation that need to change. “But we must also fight the unfair trade practices that have gutted our industry, and that includes cracking down on the predatory online sales of foreign goods, which is absolutely killing our shoppers and our shopping centers. If you look at what’s going on with shopping centers and stores and jobs in stores, it’s been very, very tough for them.”

With these changes beginning to take place, and others about to begin, there are new hopes for American businesses once again, as well as the American worker. “We will lift our citizens from welfare to work. We will turn boarded-up communities into new outposts of American commerce. And we will once again rediscover our heritage as a manufacturing nation.”

These are the very actions that President Trump promised that he would carry out when he took Office. He has proven sincere as so many actions of his are taking shape. He addressed his focus on the many needed changes within America as he shared words from William McKinley, “But “reciprocity must be treated as the handmaiden of protection…we ought to take care of our own nation and her industries first.” The President continued, “We have to look at our nation first for a change. We’ve been looking the other way for a long, long time.” As the President finishes his words to the many businessmen and businesswomen, he concludes his speech with the signing of a Presidential Proclamation that would establish a “Made in America Day” and a “Made in America Week”.

This is so exciting. This is a whole new world. It is a beautiful thing that is happening in America. If America went dark, it would have affected the entire world. We must recognize the tremendous shift that the Lord has done in our nation in a mere matter of months. See the full speech from Vice President Pence and President Trump regarding “Made in America”, how businesses in America will once again thrive and prosper, and so much more. Also shared in this segment: The White House, President Donald Trump, Vice President Mike Pence, American beef, Sonny Perdue, farmers, manufacturing jobs, trade agreements, China, trade deficits, Obamacare, Pennsylvania Miners, Mining jobs, hope, and inspiration. Greg and John shared in this segment.
screen capture from youtube.com/The White House