Son of Hamas: “The Green Prince” Double Agent who worked with Israel to Reveal the Operations of Hamas 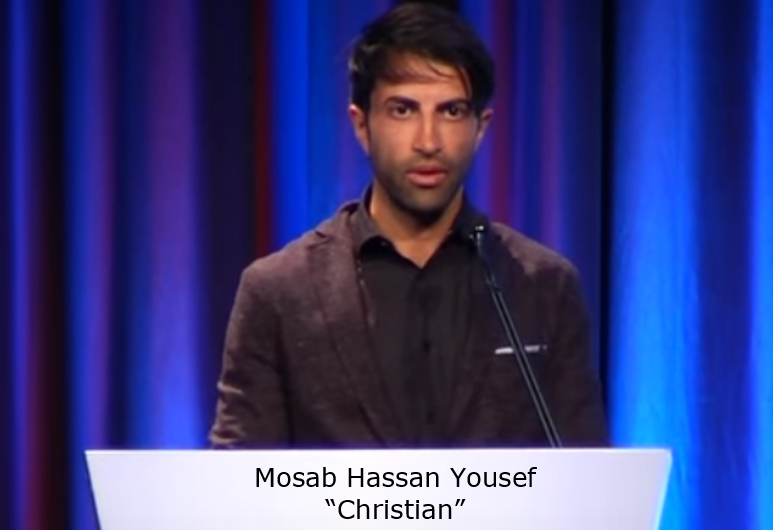 LISTEN NOW! Repeatedly, America is told that Islam is a ‘religion of peace’. When we see the tragedies occurring like the beheading of journalist James Foley and the many shootings in the name of Islam, we can clearly see that it is anything but that. When acts of Jihad are being carried out, these things are being taught in the Koran. The god of Islam is NOT the God of Christianity. When children grow up in an environment of strict Islam, it is no surprise to see them become a product of their environment. Former FBI Agent, John Guandolo, also warns how Islam teaches these mindsets to children at a young age.

For Mosab Hassan Yousef, the beginning of the story was the same. He not only witnessed the realities of Radical Islam, there was a unique presence in his upbringing. His father, Hassan Yousef, was the leader of the terrorist group, Hamas. He had been taught a certain perspective about the Jewish people, but all of that changed when he actually encountered them. As a teenager, Mosab Hassan Yousef was approached by Israelis and asked to work for them. This contradicted everything, every mindset, and every understanding that he had grown accustomed to as a child, and now as a young man. His entire journey and story were chronicled in the book Son of Hamas, and the documentary film, The Green Prince. He has now given his life to Jesus Christ and is a friend to Israel.

Mosab Hassan Yousef recently spoke with The Jerusalem Post about his story. He has a special connection with The Jerusalem Post, as it was this paper that he read almost every day for 16 months while he was in an Israeli prison. Considering the impact of his own journey, he shares profound truth as he begins with these words. “It’s very hard to encapsulate the human journey, human evolution, in any form of language…truth at those heights cannot be conveyed, in any form actually. Not in a movie, not a book, not a speech, we cannot reduce ourselves to words that cannot defend themselves.” He continues to shares, “Somebody is going to take this speech out of context and serve maybe some Palestinian agenda, eventually. This is how it works.”

People may think that Mosab is serving an agenda or representing someone or something in particular. It is actually quite the opposite. He confronts this perspective head-on with these words. “I don’t represent government, or politicians. I represent myself. I am an individual. I am not an organization and I don’t like to take sides, cause I don’t belong to nations. I don’t belong to the crowd. I have transcended this a long time ago.” It is with the experience that he has assembled, he shares how his perspective of Israel is what it is. “And when I see nations fight against the Jewish people, that hurts me. Because at some point I thought the Jewish people were the enemies of humanity until I came to experience what the Jewish nation really is.” Taking into consideration Israel’s Middle East neighbors, he shares what sets Israel apart. “…through witnessing the true democratic model in an ocean of darkness; the only light in the Middle East…”

It is a stark contrast when he shares what he witnessed and experienced in his own culture. “In the Muslim society, I witnessed a woman who sent five of her children to die in suicide bombing attacks, one after another. She would put the explosive belt on them, and bless them and say ‘Go kill the Jews’.” He continues to share how we must be mindful of these environments and that we are each human beings. “This is the problem with that society conditioning; that if you take individuals on the side, they are just human beings, like us. Any of us could have been brought in that environment, would be conditioned in the same way. The human condition does not differentiate between an Arab or a Jewish person.”

The life and decisions that he has made stands as an example to people everywhere, to all Muslims. “The Muslim people have a problem and their problem is in their belief system. They have to face it and we need to encourage them to fight the good fight AS I DID.” Barbara Still faced a similar choice when she was presented the Gospel of Jesus Christ. Raised as a Muslim, this new belief contradicted everything she was taught, everything she had experienced, and everything that she had believed. She immediately knew that she was in uncharted territory when she heard a voice clearly say to her, “All I ever wanted was your heart”. After that moment, her life was never the same. [Read about Barbara Still’s Encounter with God]He shares insight into the Islamic culture that what we are witnessing today is nothing different than what was started centuries ago. It simply has not changed. “We cannot fool ourselves, there is an Islamic problem. Al-Qaeda, Hamas, Hezbollah, Islamic Jihad, ISIS, Boko Haram, all of them are killing by the name of Allah.” It does no good to deny this reality. “There has been a religious war whether you like it or not. The better way is to face it, to grow up, and face it with courage.”

His story is such a powerful and inspiring testimony of truth and reality. He experienced the harsh and brutal realities of Hamas and Radical Islam. He was raised to think a certain way towards Jews, but when his experience encountered reality, he knew there was a choice to be made. As Christians, we need to be the light wherever we are, just as Mosab is boldly shining the light in the Middle East. Coming from a life of privilege, Mosab had everything to lose. Not all of us come from the same background of status and power, but can make the same decision to follow Jesus Christ and live our lives for truth. Be encouraged as you see his entire speech, the trailer to The Green Prince, and so much more. Also shared in this segment: Radical Islam, Hamas, interrogation, Orlando, Holocaust, BDS Movement, Temple Mount, freedom, peace, and political correctness. Greg and John shared in this segment.