FREEDOM MARCH IN IRAN, Pres. Trump & Ambassador Haley Openly Declare their support for the Oppressed People of Iran, for Freedom 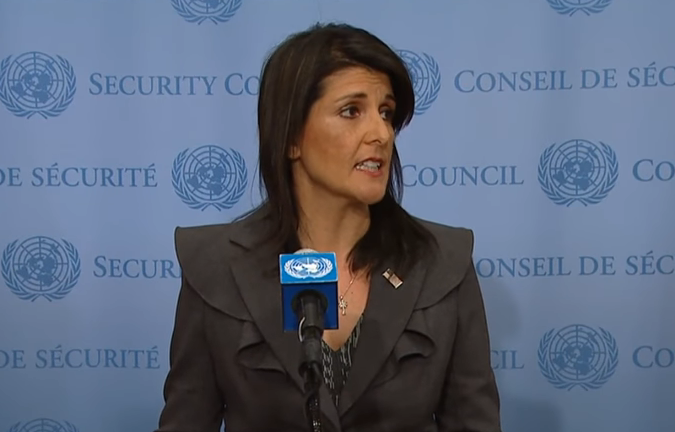 LISTEN NOW! Or WATCH FULL PROGRAM! U.S. Ambassador to the United Nations, Nikki Haley, has garnered for herself the nickname “Haley’s Comet” with her bold and matter-of-fact style since she has began speaking to the

international community at the United Nations. Most recently, she spoke on behalf of the Trump Administration when making remarks about the events that have been unfolding within the nation of Iran. During the Obama Administration, the green party wrote a letter to Barack Obama but he never responded to them. In response, he made a nuclear deal with the nation of Iran. The Trump Administration is demonstrating quite a different approach to Iran: boldness and truth!

Ambassador Haley recently spoke at the United Nations specifically in response to Iran. “In these first days of 2018, nowhere is the urgency of peace, security and freedom being more tested than in Iran.” What some may not be aware of is how the Iranian people are standing up in massive protest to the oppressive regime of the Iranian leadership. Speaking with encouragement towards these courageous people, Ambassador Haley shares, “it takes great bravery for the Iranian people to use the power of their voice against their government, especially when their government has a long history of murdering its own people who dare to speak the truth.”

Knowing the critical opportunities this generation are afforded; the Iranian

people are shouting their voices using social media, in spite of their government attempting to shutdown social media. As Ambassador Haley shares, Twitter posts are boldly declaring what some of the Iranian people are hoping for.

“All these brigades are coming out to the streets. They’ve come out against the leader.”
“Political prisoners must be free.”
“Independence. Freedom. Iranian Republic.”
“Neither Gaza, nor Lebanon. My life only for Iran.”
“Let go of Syria. Think of us.”
“We will die, but will take Iran back.”
“Don’t be afraid. Don’t be afraid. We’re all together.”

The significance of this moment is Ambassador Haley underscoring that these words are from the Iranian people and no one else. “Those are not my words. Those are not the words of the United States. Those are the words of the brave people of Iran.” In an attempt to twist the realities of what is actually taking place, Ambassador Haley highlights how the Iranian government is attempting to blame these massive gatherings on the enemies of Iran. Continuing to speak with boldness and truth, Ambassador Haley adds, “we all know that’s complete nonsense.” She adds, “the demonstrations are completely spontaneous. They are virtually in every city in Iran.” As she speaks to the audience within the United Nation, she calls on the international community to take note of these events and respond. “Dozens have already been killed. Hundreds have been arrested. If the Iranian dictatorship is any guide, we can expect more outrageous abuses in the days to come.”

can to speak out against the realities that are taking place in your country, against your own people? For so long, much of the mainstream media has not talked about what has been taking place in Iran. We must pray for the Iranian people. We must pray for the Church in Iran as God is moving mightily amidst the Iranian people. See the full conversation to see the full words from Ambassador Haley and so much more. Also shared in this segment: Radical Islam, United Nations, The Trump Administration, President Donald Trump, Iran, U.S. Ambassador to the United Nations Nikki Haley, Iranian dictatorship, and the Iranian Nuclear Deal. Greg and John shared in this segment.