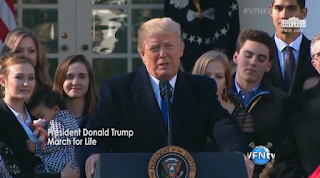 Who would have thought that 45 years ago, when the March for Life started, that it would have the impact and recognition that it now garners? Last year, Vice President Mike Pence spoke at the March for Life, and many were greatly encouraged. This year, as the 45th President of the United States, President Donald Trump, spoke at the March for Life, he was the first President to address this monumental event. It is so vital that we recognize the importance of the unborn. In Genesis 4, the Lord speaks specifically about Abel who was murdered by his brother, Cain, and that Abel’s blood “cries out to me from the ground.” If Abel’s blood still cries out, how much more do the 50+ million children who have been aborted since the passing of the Supreme Court decision, Roe v Wade?

As President Trump addressed an attentive crowd from inside the Rose Garden, he wasted no time as he pointed out how valuable every child is. “The March for Life is a movement born out of love. You love your families, you love your neighbors, you love our nation, and you love every child, born and unborn, because you believe that every life is sacred, that every child is a precious gift from God.” The President continues to state, “We know that life is the greatest miracle of all.”

The President understands that it takes all of us, working together, to realize the impact on this important issue, “Because of you, tens of thousands of Americans have been born and reached their full, God-given potential – because of you. You’re living witnesses of this year’s March for Life theme. And that theme is: Love saves lives.”

As the President continued to highlight the exciting news that was taking place in this year’s March for Life, he reminded every one of the milestone decisions that had been carried out during his first year of Presidency. The President reinstated the Mexico City Policy, which blocks federal funds from being given to non-governmental organizations that carry out abortions. The President also nominated and appointed Justice Neil Gorsuch to the Supreme Court. The President also supported the House of Representative’s “Pain-Capable Bill” which, in its own words is described as to protect pain-capable unborn children…”

It is so significant that the President would declare these uplifting words from the Rose Garden, a few feet from the Oval Office. The Lord that signs would happen in the White House. President Trump is having a great impact on the history books, as it is only the first year of his Presidency. He wants to be known as the most praying President in history. We commend the President and stand in prayer for him. Does the President’s actions encourage you? We want to hear from you.

See the full conversation about the exciting moment in our nation’s history, as well as the full statements from the President regarding the March for Life, and so much more. Also shared in this segment: President Donald Trump, The Trump Administration, The White House, The Oval Office, The Rose Garden, March for Life, Vice President Mike Pence, the Mexico City Policy, Justice Neil Gorsuch, Pain-Capable Bill, what does God say about abortion?, can God help me with my baby?, and pro-life. Greg and John shared in this segment.

#SuccessSecrets – Avoid Frustration and Wasting Time! What Matters Most to You?

Have you ever wondered if God pays attention to your life? Does He care about you succeeding? ABSOLUTELY! God is so into your success! The Lord recently spoke to Greg Lancaster and showed him football players at their graduation ceremony. One of these men stood up and said, “I have some good things and bad things. Let the main thing be the man thing.” Suddenly, one of these men turned into Bishop T.D. Jakes. Then Bishop T.D. Jakes began to speak as well. Jakes was holding something in each of his hands as he spoke these words. “Don’t let what matters least compromise what matters most.” This statement is such a powerful nugget of wisdom to hold on to.

In his book, He-Motions, Bishop T.D Jakes points out that the highest rate of suicide is men in their 50’s. Don’t end your life, change your values. When we look at each of our lives, what matters in the end? Outside of God, nothing in his life makes sense. Being able to have a relationship with God, and recognize His voice, speaking to our hearts, our lives will be dramatically changed, from that moment forward. When we know what is important, no longer will we allow our relationships to be sacrificed for things that don’t even matter. We can choose to have relationships that feel good or have relationships that encourage us and revive us. It matters who we hang around. Do these words of wisdom lift you up? Are they giving you hope? Is there wisdom that God has given you to live your life better? We want to hear from you. See the full discussion about #SuccessSecrets, the full vision from the Lord, and so much more. Also shared in this segment: He-Motions, Bishop T.D. Jakes, values, life management, abiding, does God see me?, how do I hear the voice of God?, does God speak to me?, is God speaking to me?, what does God’s voice sound like?, how do I know when God is speaking to me?, and hope. Greg and John shared in this segment.