NO MORE FEAR! Emma Shares Powerful Testimony of her Breakthrough from Fear 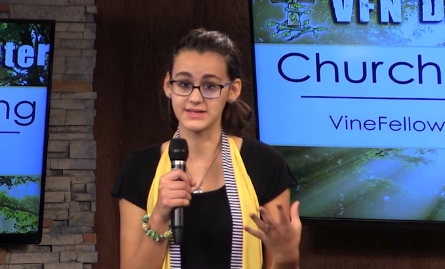 I wanted to share something that happened a little bit before the fast but it was so encouraging and exciting I wanted to let you guys know.  Some of you may have known that fear had been a big stronghold in my life for a very long time. It whipped me around like a tether ball and I allowed it. The struggle was a HUGE hindrances with my walk with God. It kept me from doing things out of my comfort zone. By the end of 2017, I was ready to acknowledge this and let it go! FINALLY! I made a list of things I was going to do differently. For example, change my mindsets. I laid out expectations and goals.
Entering the New Year didn’t go at all how I planned. From the minute the clock struck midnight- I mean this in all seriousness- I felt an almost unbearable amount of heaviness. I was super anxious, which on a normal day I have anxiety occasionally throughout the day but this was bad- it was all day every day for the first week of 2018. I kept praying and asking God why this was happening.
A few days later, I was sitting on the couch with my dad watching a television show when I felt like someone had just pushed a gust of heaviness right into my chest. My heart skipped a beat and I caught my breath. Instantly, my hands and feet began to sweat. My heart started racing… I was feeling the effects of a panic attack coming on! This was so strange because I was sitting in my home- which is usually my “safe haven” when I get panicky I always want to go home. It was rare I ever felt panicky at home.
Normally, when I would feel these things come on I would just give in and have a panic attack but I really thought about it for a second and rationalized that I was being attacked by the enemy! I don’t know how to explain the shift that happen in my mind that day but it was like for the first time in my life I acknowledged that it was the “enemy” who was attacking me with fear. So, I mumbled under my breath, ‘In the name of Jesus FEAR I COMMAND YOU TO GO!” and JUST LIKE THAT, I felt instant PEACE! To be honest, it was the first time I’ve ever felt the Lord’s peace like that.
So, that night before bed I was reading “The Call” by Rick Joyner. As I was reading, I was thinking about what had happened and the change I felt after I did. The last paragraph in the chapter I was reading said this,
“This is where you must live- between the dying and the living. Do not FEAR but BELIEVE. You have been WEAK, but I am making you STRONG, Fear must no longer rule over you. Do nothing because of fear. Do what you do because of love, and you will always triumph. Love is the source of courage. Love will prevail in the end. Encourage my builders with these words.”
I had to reread this a few times but it was obvious what the Lord was saying, the victory I just felt wasn’t going to stop! The Lord was beginning to shift my mindsets. After that day, I began to feel so much more alive and free in the Lord. Free like never before!!!! I’ve begun to do things that I never would’ve done prior to having this revelation. The Lord has given me a different perspective on fear! I haven’t had one anxiety attack since that day. I’ve been attacked, but I have not let it torment me like before.
I hope this wasn’t too complicated to read. I have a hard time describing things that are just so indescribable! God is so good and if he can transform me from a life of fear to a life of faith, he can DO ANYTHING! SIX YEARS of captivity!!! The Lord lifted the burden in ONE DAY! Nothing is too hard for him! Declare and Decree just like Pastor John shared and it will surely happen!
breakthroughfearhopetestimony
0
FacebookTwitterPinterestEmail