WATCH! Pres. Trump moves U.S. Embassy to Jerusalem; Blessing over the President; and 173 Accomplishments in 353 days 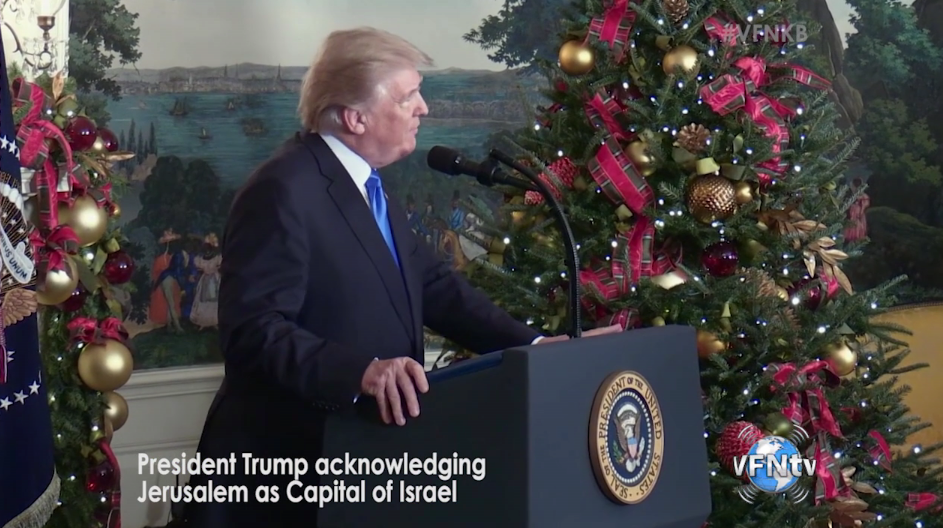 LISTEN NOW!
President Trump Makes HISTORIC Statement Acknowledging Jerusalem as Capital of Israel and Pastor John Kilpatrick speaks Blessing over President in Response
These are truly exciting days that we are witnessing and able to be a part of! The Bible is very clear that it matters how we respond to the nation of Israel. As Genesis 12:3 reveals, “I will bless those who bless you, and whoever curses you I will curse…”. When we bless Israel, God responds in a powerful way. Imagine what will take place when someone decides to recognize Jerusalem as the capital of Israel and place their respective nation’s embassy in Jerusalem? That is EXACTLY what President Trump has just done.
In a statement from the White House, President Trump boldly proclaims, “I have determined that it is time to officially recognize Jerusalem as the capital of Israel.” As he continues, “While previous presidents have made this a major campaign promise, they failed to deliver. Today, I am delivering.” This is such a beautiful and powerful moment in history. It is imperative that we stand behind our President in his mighty decision, and pray for him. Pastor John Kilpatrick, of Church of His Presence, shares an inspiring word as he also prays for the President and shares his support of his recent decision to recognize Jerusalem as the eternal capital of Israel.
We bless our President, Donald J. Trump. You have come to the Presidency of these United States for such a time as this. You are a modern-day Jehu. You are unafraid to carry out the unpleasant assignments that must be done. What others could not, and would not even attempt, you stepped up and shifted the nation out from under godlessness, indecisiveness, and leading from behind. You are restoring the blindfold over the eyes of Lady Justice once again. You have put salt and light back into the highest court of the land. You are removing the oppressive yoke from the necks of the people. And now, you have single-handedly aligned yourself, and this nation, with the heart and purposes of Jehovah God concerning the nation of Israel; and, Jerusalem.
We declare that you are protected and defended by the Host of Heaven. Weapons may be formed against you by a myriad of enemies, but they shall not prosper. They will backfire. God shall frustrate the token of the liars. We bless you. We bless your wife Melania, as well as your extended family to know that there is a wall of fire round about you, and a canopy of glory over your heads. We declare that although you have just begun, you will finish. You will accomplish all that you have been called to do. Only time will tell how the gift of your Presidency to this nation has changed the course of history in this season. So, may God bless the President of the United States. May God bless the United States. And, may God really bless the Church for praying for our President; especially in this time. Thank you very much.
We thank you dearly Pastor Kilpatrick for these inspiring words of encouragement and support for President Trump and his recent decisions. This is truly exciting days that we are a part of and we can witness. See the full conversation about what is taking place regarding Israel, the full statements from President Trump, Pastor John Kilpatrick, and so much more. Also shared in this segment: The White House, The Trump Administration, Jerusalem Israel, President Trump moves U.S. Embassy to Jerusalem, President Trump recognized Jerusalem as capital of Israel, blessings, prayer, Pastor John Kilpatrick, Church of His Presence, and hope. Greg and John shared in this segment.
See more, related content and articles for this article.
173 ACCOMPLISHMENTS IN 353 DAYS! Looking Back on the First Year of the Trump Administration
When we look back over the last 8 years of the previous Administration, we can see the significance and incredible SHIFT that has taken place in America since President Trump has taken leadership in the White House. In his first year of Presidency, President Trump has done an incredible work in America.
As a brief overview, and skimming the surface of what has taken place, President Trump has nominated and appointed Justice Neil Gorsuch to the Supreme Court, he has stood in support of our law enforcement and military, responded swiftly to eradicate gang cartels such as MS-13, and nearly decimated the existence of ISIS. This is nothing more than the mercies of God. God has used President Trump as the Lord has used Cyrus.
When speaking to Faith Nation, Pastor Paula White also commented on the tremendous actions that have been carried out within the Trump Administration. Pastor White points out how President Trump has recognized Jerusalem as the capital of Israel, his involvement with the National Day of Prayer, as well as the many faith leaders he has invited to the White House.
All of this is simply the beginning of all that was accomplished. President Trump has now brought unemployment to its lowest since the government has been tracking these statistics. President Trump has pulled $255 Million in support that was going to Pakistan because of their refusal to harbor terrorists. He has also cut a record amount of government regulations.

We must recognize how President Trump’s leadership is affecting all 7 areas of America’s culture. It begs us to ask the question: are we moving in the area of culture that God has called us to operate in so that we can make the biggest impact? God is moving in a powerful way and we must respond to what God is doing. See the full conversation of what President Trump has accomplished in his first year of office, and so much more. Also shared in this segment: The Trump Administration, The White House, tax reform, federal regulations, ICE agents, Mexico border wall, Pastor Patricia White, Faith Nation, Pakistan, 7 Mountains of Culture, draining the swamp, United Nations, Cass Susstein, unemployment, Dow Jones Industrial Average, counter terrorism, Radical Islam, ISIS, mercy, hope, and prayer. Greg and John shared in this segment. See more, related content and articles for this article.