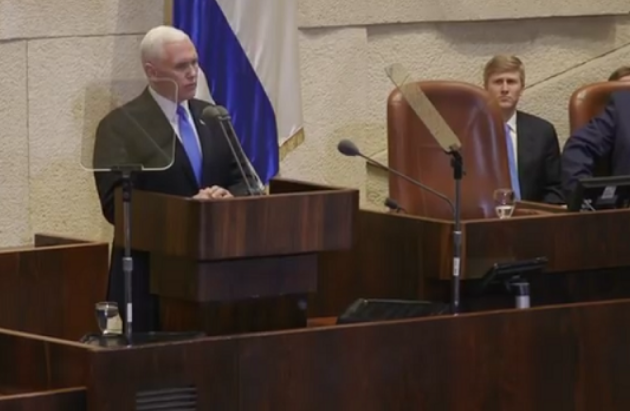 LISTEN NOW! Or WATCH FULL PROGRAM!
It is so encouraging to see the relationship between the United States and Israel beginning a new chapter, and the leaders between the two nations so cordial and friendly towards one another. President Trump has done a miraculous work with our ally since he began his Presidency, and Vice President Pence has carried out the heart of the President when he recently visited with the Prime Minister of Israel, Benjamin Netanyahu.
Vice President Pence spoke at the Knesset, Israel’s legislative branch of government. As Vice President Pence expresses, “We stand with Israel because your cause is our cause. Your values are our values, and your fight is our fight.” Our relationship with Israel has been continual since the moment that America acknowledged Israel as a Jewish State. As President Truman was the first to recognize Israel at its birth, a United States President was again, the first in one of Israel’s historic occurrences: recognizing Jerusalem as the capital of Israel. “But just last month, President Donald Trump made history. He righted a 70-year wrong, he kept his word to the American people when he announced that the United States of America will finally acknowledge Jerusalem is Israel’s capital.” The Vice President continues to share that plans to move the American Embassy from Tel Aviv to Jerusalem will be completed by the end of 2019.
This is so exciting! It is such a miracle to see the relationship with our most important ally at the heights that it is now in. Things were not always as they are. When we look at the former Administration and how the former President responded to Prime Minister Benjamin Netanyahu, we are better able to appreciate the gift of how things presently are. It is a good thing to be in right relationship with Israel. See the full discussion about what is happening with Israel, the full statements from Vice President Mike Pence, and so much more. Also shared in this segment: The Trump Administration, The White House, Vice President Mike Pence, The Knesset, Israel, Jerusalem is the eternal capital of Israel, Prime Minister Benjamin Netanyahu, hope, and angry birds. Greg and John shared in this segment. screen capture from youtube.com/The White House
Related Content
Vice President Pence in Israel
The Knesset
President Truman’s Decision to Recognize Israel
iAbide.org
Emmaus Road Discipleship
VFN Kingdom Business
Subscribe to our YouTube Channel
Follow us on Twitter
Partner with VFNKB
Related Articles
Pray for our President of the U.S.A., President Donald Trump
173 ACCOMPLISHMENTS IN 353 DAYS! Looking Back On The First Year Of The Trump Administration
hopeIsraelJerusalem is the eternal capital of IsraelPrime Minister Benjamin NetanyahuThe KnessetThe Trump AdministrationThe White HouseVice President Mike Pence
0
FacebookTwitterPinterestEmail