Rabbi’s Fatal Knifing to the Heart; 29-Year-old Rabbi stabbed to death by a radical Islamic terrorist 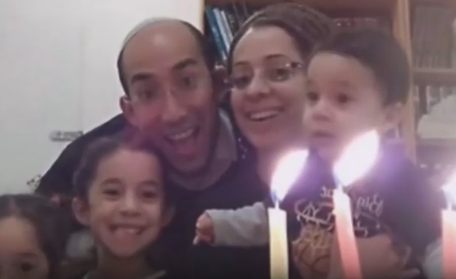 LISTEN NOW! Or WATCH FULL PROGRAM! It is important that in our daily routines we keep our hearts toward Israel. So much of what happens within Israel is not reported, and what is, is most often reported with a wrong perspective. The Jewish people are continually persecuted for the simple reason that they are Jewish. This has once again been the case when a 29-year-old Rabbi was stabbed to death when he was calmly standing on the side of the road waiting for a bus.
As CBN News reports, “The 29-year-old rabbi and father of four who was stabbed to death in a violent terror attack Monday afternoon was laid to rest Tuesday morning.” The terror attack occurred in Har Bracha of Judea and Samaria, which is the present area of the West Bank. It is because of this attack and the response of praise from the Palestinian Authority, that has cause President Trump to put the $225 Million on the table, regarding peace talks with the Palestinian Authority. If they refuse to stop funding and praising terrorists, the money will be taken off of the table.
People are coming against Israel and the Jewish people thinking that their attacks are a good thing. Israel is the only democracy in the region. These horrific actions are what happens when people are allowed in your country that do not assimilate to your values and ideals. How are you standing with Israel? We want to hear from you.
See the full story of what is taking place in Israel, how we must stand in allegiance and support with Israel, and so much more. Also shared in this segment: Israel, persecution, Palestinian Authority, The West Bank, Samaria, President Trump, Prime Minister Benjamin Netanyahu, Knife Intifada, John Kerry, BDS Movement, the United Nations, and truth. Greg and John shared in this segment.
screen capture from cbn.com
Related Content
Israeli Surveillance Footage of Rabbi Murdered
Thousands Mourn Death of Second Rabbi Killed in Terror Attack
Rabbi Itamar Ben-Gal Laid to Rest
iAbide.org
Emmaus Road Discipleship
VFN Kingdom Business
Subscribe to our YouTube Channel
Follow us on Twitter
Partner with VFNKB
Related Articles
Pray for our President of the U.S.A., President Donald Trump
Prayer for Israel
Are You Ready to Stand with Israel?
U.S Embassy in Jerusalem; Next Year 2019; President Trump and P.M. Netanyahu
Children are being Raised to Hate! Palestinian Father tells Israeli Soldiers to Shoot His 4-Year Old Son
Palestinian Woman Surprise Knife Attack on Israeli Security Guard
BDS MovementIsraelJohn KerryKnife IntifadaPalestinian AuthoritypersecutionPresident TrumpPrime Minister Benjamin NetanyahuSamariaThe United NationsThe West Bank
0
FacebookTwitterPinterestEmail

The Return of Guy Fawkes? Riots in America? Congressman on Terrorism...