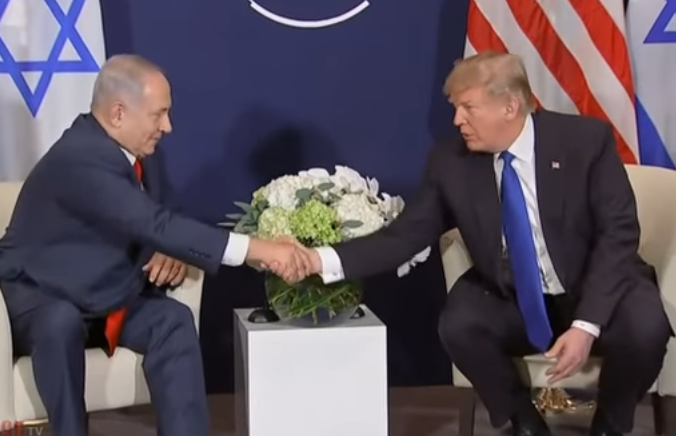 LISTEN NOW! Or WATCH FULL PROGRAM!
It is so exciting to see such powerful leaders of the world coming together, discussing their friendship and the value that their alliance provides. When President Donald Trump recently visited Davos, Switzerland to attend theWorld Economic Forum, the President also took timeto sit with Prime Minister of Israel, Benjamin Netanyahu to discuss important events regarding their relationship.
As the two leaders sat before an audience of attentive members of the Press, President Donald Trump opened with these encouraging words regarding America’s strong relationship with Israel. “We’ve developed a great relationship both as countries, where, I think, it’s never been stronger…and also, as personal friends.”  The President immediately shifts topics to the matter of the U.S. Embassy that will be moving to Jerusalem. “That is way ahead of schedule, by years, and we anticipate having a small version of it opened sometime next year.”
As Prime Minister Benjamin Netanyahu replies to the President’s opening remarks, the Prime Minister takes time to note that this is the first meeting between the two since President Trump has announced that America would be moving their U.S. Embassy to Jerusalem. “I want to say that this is a historic decision that will be forever etched in the hearts of our people, for generations to come.” Contrary to what many media sources say around the world, Prime Minister Netanyahu insists that the move of the U.S. Embassy will advance peace in the region.
As the Prime Minister continues to speak, he turns the attention towards the Iran Nuclear Agreement, and his support of President Trump’s stance on the matter. “You said it’s a disastrous deal…” As President Trump has voiced the option of removing America from the deal, Prime Minister Netanyahu continues, “I want you to know that if you decide to do that, then we will back you all the way”.
As Israel stands behind America, America also stands behind Israel and has done so as President Trump boldly declared truth to the world when speaking to the United Nations. Prime Minister Netanyahu speaks with clarity as he describes the United Nations with these words; “it is a house of slander against Israel and against the United States, by word and deed”.
As the conversation transitions to peace talks in the Middle East, President Trump talks about the hundreds of millions of dollars that have been given to the Palestinian Authority. “That money is on the table. That money is not going to them unless they sit down and negotiate peace.” President Trump highlights how his stance on the topic sets him apart. “This was never brought up by other negotiators, but it’s brought up by me.”
According to President Trump, the loss of hundreds of millions of dollars was not the prime topic to the Palestinian Authority. “The hardest subject they had to talk about was Jerusalem.” In response, President Trump shares, “so we took Jerusalem off the table. So, we don’t have to talk about it anymore. They never got past Jerusalem. We took it off the table. We don’t have to talk about it anymore”.
We want to hear your thoughts on the matter? How do you feel about America’s present relationship with Israel? How do you feel about President Trump deciding to move the U.S. Embassy from Tel Aviv to Jerusalem, Israel? See the full conversation with President Trump, Prime Minister Benjamin Netanyahu, and so much more. Also shared in this segment: truth, hope, Davos Switzerland, World Economic Summit, Palestinian Authority, peace talks, peace negotiations, peace in the Middle East, Jerusalem is the eternal capital of Israel, President Donald Trump, The Trump Administration, and Prime Minister Benjamin Netanyahu. Greg and John shared in this segment.
screen capture from youtube.com/CHANNEL90seconds newscom
Related Content
President Trump Meets with Prime Minister Benjamin Netanyahu at World Economic Forum in Davos
iAbide.org
Emmaus Road Discipleship
VFN Kingdom Business
Subscribe to our YouTube Channel
Follow us on Twitter
Partner with VFNKB
Related Articles
Pray for our President of the U.S.A., President Donald Trump
173 ACCOMPLISHMENTS IN 353 DAYS! Looking Back On The First Year Of The Trump Administration
President Trump Makes HISTORIC Statement Acknowledging Jerusalem As Capital Of Israel And Pastor John Kilpatrick Speaks Blessing Over President In Response
Davos SwitzerlandhopeJerusalem is the eternal capital of IsraelPalestinian Authoritypeace in the Middle Eastpeace negotiationspeace talksPresident Donald TrumpThe Trump AdministrationtruthWorld Economic Summit
0
FacebookTwitterPinterestEmail