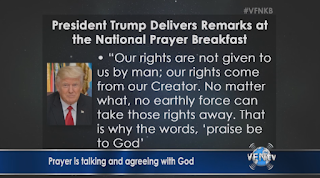 LISTEN NOW!
President Trump “WE LOVE GOD” “WE SEE GOD’S GRACE…” NATIONAL PRAYER BREAKFAST, 66th Annual
Another year has gone by and members from both parties of our government have once again gathered together for the National Prayer Breakfast. This year marks the 66th annual event, which is also now the second Prayer Breakfast that President Trump has attended. There has been so much division that was been demonstrated between our two parties of government. But, this event demonstrates how this is not always true. Franklin Graham, who also attended the event, shares the significance of the event.

“It was a privilege to be at the National Prayer Breakfast yesterday. Many powerful testimonies to God and prayers for our country were shared by different individuals. The Prayer Breakfast is a bipartisan event co-chaired by a Democrat and a Republican. This just goes to show you that both parties in Washington can work together–when we come together in Jesus’ Name.”