Pastor Andrew Brunson, From Turkish Prison to the White House in 24 Hours! 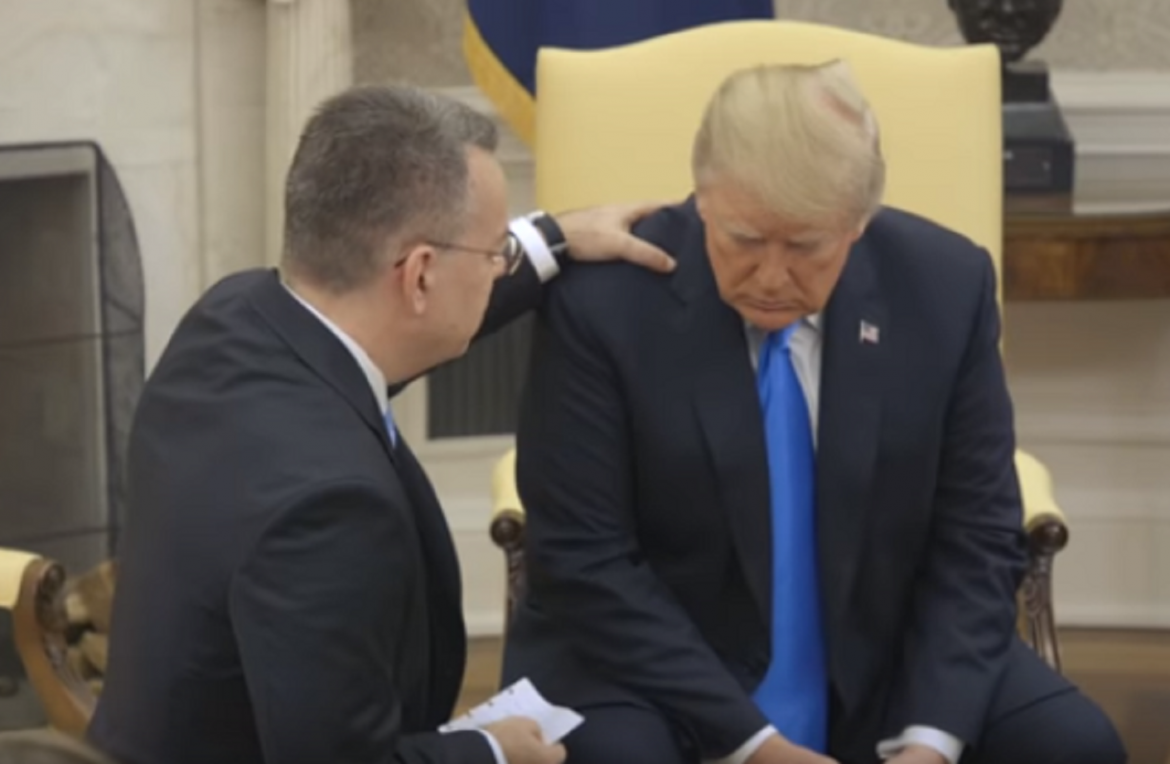 Andrew Brunson, a pastor who lived in Turkey for years preaching the Gospel, was arrested along with his wife in Turkey. They were accused of things that they had not done. The Turkish government had said they were not going to let Pastor Brunson free unless America traded a prisoner for him, but President Donald Trump said no about trading prisoners and that they needed to let Pastor Brunson free. Many people in America, from lawyers, governmental officials, and his wife, Norine Brunson, who stayed in Turkey, repeatedly contacted President Trump and his administration to do everything possible to free Pastor Brunson. And now we see the answer to prayer as he has been set free!

Within 24 hours President Trump brought Pastor Brunson directly to the White House after leaving the Turkish prison. President Trump remarks, “This has been a long journey.  But for Andrew, it’s been a very interesting day.  Because as you probably heard, I said a little bit earlier, from a Turkish prison to the White House in 24 hours… And I want to start by saying that Norine was unbelievable.  She was calling and calling.  She definitely loves you let me put it that way.  But she was calling and she wanted you out. And you (Pastor Brunson) are very, very special to all of us… And again, we’ve been negotiating long and hard.  We do not pay ransom in this country, at least any longer.  We won’t pay ransom.  Otherwise you have big problems, and lots of things will happen.  Lots of bad things will happen. But I still I want to thank President Erdogan.  We’ve been dealing.  And we actually until this, we had a very good relationship.  I was actually very surprised that we didn’t work this out a couple of months ago.  But it started in a different administration, and they were not going to work out anything.  And we took it over, we inherited it.  And we have, I think at this moment, gotten 19 different people out of various countries that were being held.” President Trump speaks to Pastor Brunson, “So I just want to congratulate you, because you have galvanized this country.  I mean, you just take a look…there’s so much interest.  And it’s your faith, it’s your strength, what you’ve gone through.  I know what you’ve gone through.  And I also know that, a period of time ago, we were able to get you from prison to the house.”

Pastor Brunson introduces his family that was there with him in the White House and expresses his thanks to all that have helped to free him. “And we especially want to thank the administration.  You really fought for us, unusually so.  From the time you took office, I know that you’ve been engaged, and Secretary of State Pompeo also was very engaged and fought for us.  And Vice President Pence, we’re very grateful.  Mr. Bolton. There are a number of people in the Senate.  And I can’t mention everyone, but I know that Senator Tillis visited me in prison, and so did Senator Shaheen and Senator Graham.  And Senator Lankford has been involved from the very beginning. So, we’re so grateful to so many people in the Congress who stood with us and who prayed for us, and who fought for us. So, we want to thank you all very much.”

Our president was humble enough to receive prayer and bow his head before a holy God, before the world, as Pastor Brunson and his wife prayed for him. It is encouraging to see our President standing up for believers. Seeing the amazing changes that have taken place in America should spur us on to get out and vote! We must be informed of who is running and be value based voters. You can visit here to find out more about the candidates running in your state.

In another interview Pastor Brunson shares his experience in the Turkish prison. “Just being in prison is pretty rough. At the beginning I was held in solitary confinement for a number of days and that was very difficult. And the way I survived that was just spending hours in prayer just to keep my sanity. And then I was kept in a cell for eight people, but there were 20 of us there so it was very crowded and I was very isolated both by language and by culture, nationality and also by religion…all the people I was with were very strong Muslim’s, they were all arrested as Muslim terrorist…it was like living in a Mosque in many ways.”

Can you imagine that? This is what separates Christians from every other religion because Jesus was offered up as a sacrifice once and for all and rose again, so that we can be saved and spend eternity with Him. You can have a personal relationship with God through His Son Jesus Christ, you can read our stories at Meet My Father and make that decision today to have Jesus as the Lord of your life. We want to hear from you and what you think about this segment. You can write to us at friends@greglancaster.org. Greg and John shared in this segment.