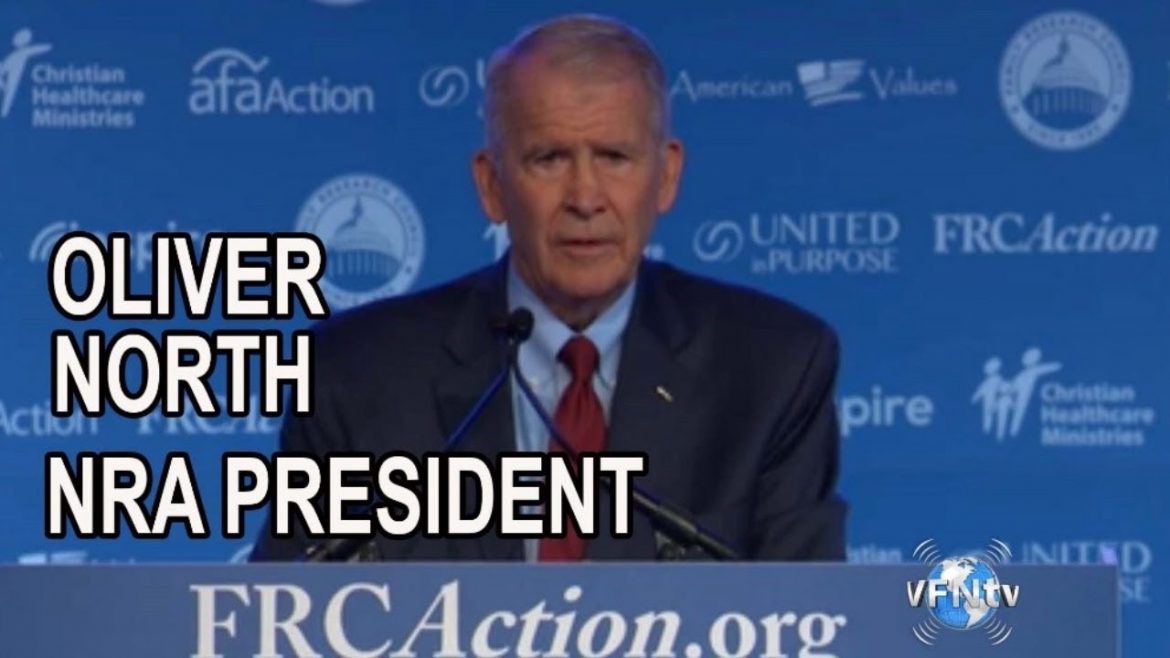 America is at a critical time right now. If you have not gone to vote yet it is important that you vote in the mid-term elections! Find out more about the candidates in your state here and see what their values are so you can make a value-based decision. National Rifle Association President, Oliver North, spoke at the Value Voter Summit 2018 and reminds everyone that Americans still value their freedoms.

“We are, I believe, on the precipice of the most important election…I’m convinced that our God given freedoms enshrined in our U.S. Constitution as the Bill of Rights, are at greater risk today than at any time since the war that pitted Americans against one another…the Civil War. That contest was anything but civil, but it resolved forever that human beings could never again be subject to bondage in this country. It also settled forever that we the people, the first three words of that Constitution…we the people shall determine how we would be governed. That very concept, of how we are going to be governed, is now being challenged by powerful elites who aim to take away our God given freedoms that are enshrined in the Bill of Rights.”

Oliver speaks about a man, Mark Robinson who attended a Greensboro, North Caroline city council meeting and he took a stand for what is right. Mark states, “I’m a law-abiding citizen who has never shot anybody. Never committed a serious crime, never committed a felon. But it seems like every time we have one of these shootings, nobody wants to put the blame where it goes, which is at the shooter’s feet. You want to put it at my feet…the people who have come together, who are together, who feel unified. Who obey the law and work hard everyday and I’m just tired of people trying to pull them apart…I’m thinking that there is millions…across the country and I’m hoping that each one of those people will go out and tell these politicians, we are not going to take it and we are going to stand for our rights and we are going to hold on to them.”

Roozbeh Farahanipour, a political refugee in America and a business owner, shares how important the Second Amendment is to him. In Iran he was tortured and jailed for 36 days because he helped lead protests for freedom of speech. He talks about how people are tortured, executed, hung in the streets for demonstrating their cry for freedom from the regime in Iran. “Just imagine if you get successful, you remove the Second Amendment from your Constitution completely. Who knows in 20 years, 25 years maybe the situation could change. But any single person should have a right to defend themselves and defend their families.”

Stephen Willeford is the hero who pursued after a shooter in Sutherland Springs, Texas where at First Baptist Church 26 people were murdered. He shares his value on the Second Amendment. “Every one of those shots represented one of my neighbors and one of my friends. I ran as fast as I could. Immediately he came out of the church shooting at me, he hit the truck in front of me, he hit the car behind me, he hit the house behind me, and I hit him. He had an AR-15, but so did I and it’s not the gun, it’s the heart. It’s a matter of the heart. I’m not the bravest man of the world or anything, but I was here. I was here, and I could do something. I had to do something.”

Tomi Ledford, a mother, shares the importance of the Second Amendment to her. In 2011 an intruder broke into her home. “I do know what its like to be vulnerable, I do know what its like to feel like you can’t protect your children or yourself. And it’s terrifying when you have a spouse, whether it be a husband or wife, that is serving overseas thousands of miles away. And you are the only one there to stand up for yourself, to stand up for your home, for your little kid that’s right there next to you. I support the Second Amendment because of that…everybody has a right to life and you have the right to protect that and nobody has the right to take that from you.”

Oliver continues saying that we won’t hear these stories on the normal media outlets. He also shares how NRA has a School Shield program that is a free service to all districts and schools in America that helps schools get equipped and made safe to protect against any shooter or attack that may come against the school. “There are more than 130,000 public and private elementary, middle and high schools in the United States.” He shares how many other places even pointing out a zoo, is more protected than most of our schools. Therefore, the NRA started the School Shield program to offer discreet professional help in securing the school. NRA also provides grants to help schools that can’t afford what is needed to secure the school.

“All the freedoms that we hold dear are quite literally at stake…the enemies of our freedom are highly organized, abundantly funded, and thanks to a super-rich group of political elites, hell bent on buying this election to serve their own agenda. This self-serving cabal of billionaires, and their politicians have conspired to permanently transform America into a socialist state. They tried their best to win the White House in 2016 and ever since they have done everything possible to undo that election. Their goal is a clear and present danger. They have announced their plan, seize power in the House of Representatives in Washington, capture the U.S. Senate, impeach our president, then crush the NRA and take the White House two years from now. And then repeal the Second Amendment. They’ve declared it, they’ve stated it. It is an all-out attack against us all and our freedom.”

Oliver continues speaking about a commercial that the NRA is running concerning honoring our country. “When you take a knee during our national anthem you disrespect the men and women who have lost their limbs, so you could spend your Sundays playing games. When you dishonor our flag, you turn your back on the families of heroes serving on the front lines whose sacrifices make it possible for cameras to focus on your disgraceful protests. And when you teach children that police are the enemy you turn your back on the very law enforcement that keeps your stadium safe. We fight for the First Amendment as much as the Second but while you use it disgracefully, we use it to tell the truth. We stand for our country, we stand for our veterans and our military. We stand for our law enforcement and we stand for our flag because we are still freedoms safest place.”

“We get the last word, we vote…every single vote by you and other Americans like us can make all the difference by preserving our freedom for our progeny…we have two missions, every one of us, pray for our nation…and second become a recruiter, just like in the Marines or the Army, go out there and find one or at least ten that will join us in this fight and go to the poles and vote to take a stand to vote for freedom. We are the land of the free because we are still the home of the brave and committed to the future of this great land.”

If you need to find out more about the candidates running in your state, you can visit here to find out more and vote based on values. Be sure to pray for our nation because God is still looking for a people to stand in the gap. God hears and God answers prayers! We want to hear from you. You can write to us at friends@greglancaster.org. Greg and John shared in this segment.