Home 7 Mountains of CultureFaith Mountain JESUS “THE SUPREME ORGANIZER”
Faith MountainGovernment MountainOrganizer of the Day vs Organizers of the Night SeriesSaul Alinsky & Rules for Radicals: A Biblical Perspective 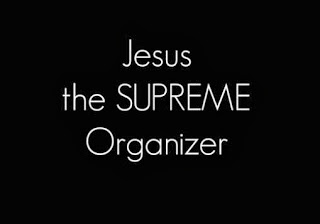 LISTEN NOW! Greg, John, and Pat discuss how Jesus is the great organizer and what he has done and is doing in orchestrating his church the way she should go. They also discuss how Apostle Paul before his conversion when he was called Saul was organizing and persecuting Jesus when he persecuted the church.  Satan has been at this for a while and we see Saul going after the church and wide spread persecution broke out but in the midst of this flood gate of persecution Saul had an encounter with Jesus, Acts 9.

Such a bright light shined around Saul that it knocked him off of his horse and caused him to be blind for three days.  Jesus himself asks Saul: “Saul, Saul why are you [organizing] persecuting Me?”  At that one moment a man who was used by satan to organize the persecution of God’s church was now touched by God and was going to be used by God to spread His kingdom.   In Saul’s case God touched a man who thought he was doing God a favor by persecuting his church.  Saul was sincerely wrong but when God revealed himself to Saul he was completely changed.    God had big plans for Saul, the organizer/ persecutor of the church was going to be used to write, inspired by God, most of the New Testament Bible.  In fact Saul came to revelatory understanding that he was not only organizing for the wrong side but that the true and great organizer is Jesus himself.  Jesus is the organizer of the church.  However, throughout history and even today many have come and tried to organize his church.  In Acts 20:29-32 “I know that after I leave, savage wolves will come in among you and will not spare the flock. Even from your own number men will arise and distort the truth in order to draw away disciples after them.  So be on your guard! Remember that for three years I never stopped warning each of you night and day with tears.  Now I commit you to God and to the word of his grace, which can build you up and give you an inheritance among all those who are sanctified.”  God the Father set up Jesus as the supreme, “great” organizer of the church in Colossians 1:15-20.  The son of God is the image of the invisible God and God himself set Jesus to be the head of the church.   Jesus gives gifts to the church to help him organize and orchestrate his church such as apostles, prophets, evangelists, pastors, and teachers according to Ephesians 4:11-12.  When organizers rise up in any other name outside of Jesus they are going the way of Korah and are organizing a rebellion.  We must follow the way of Jesus and submit to the orchestrating the “organizing” of Christ as the supreme leader of the church.