HUMOR! Was Pat Hamilton Shout Out of a Cannon? 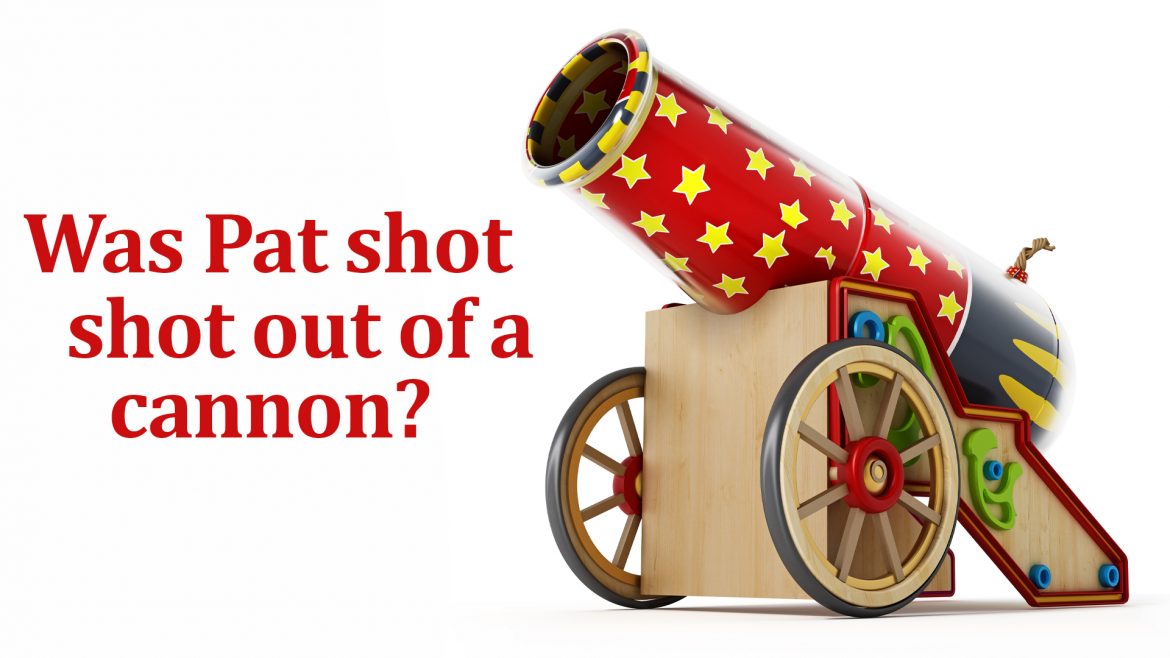 cIt’s so important that we have those moments that we can look back and laugh at. Greg recalls past memories of being able to spend quality time with Brianna and Elijah Bolender watching a man being shot out of a cannon. One may wonder what the resume is to be the one chosen to be shot out of a cannon? We may never know? What we do know is that when someone gets shot out of a cannon, there is a massive bladder of air that the man lands on to keep him safe.

Seeing this vivid imagery brings Greg back to the memories of being able to be with Pat in Eureka California. It was in Eureka that they were able to take their boys, Shane and Gered, and enjoy the beautiful sights at JH Ranch.  But, in this moment, Pat was SHOT FROM THE BLADDER! It was absolutely hilarious to see Pat laying apprehensively on one side of this massive bladder, and then see two grown men fling themselves from a high platform to fall together on the other side resulted in Pat being flung helplessly into the air. “AAAHHHHH!” This was the scream that bellowed from with Pat he was catapulted into the air and then, just as fast as he went up, he splashed down, HARD, into the freezing lake water. Amidst the nearby screams of Pat being hollered through the air, it is somewhat being drowned out by the cameraman, who was uncontrollably laughing at what his eyes had just witnessed! “OH! That was worth a million bucks man!” For the record, Greg caught this unforgettable moment for this record books and the camera was on Pat the entire time. Impressive. Gered recalls his young son Gered, a pre-teen back then, who decided to venture into the frigid waters for himself. This didn’t last long as immediately came out of the water, “STUPID! STUPID! STUPID!”

These moments are so important to remember and have to remember, but it has to be caught on film to actually see the moment! While they were in Eureka, CA, they were also able to enjoy white water rafting together where the water was a little calmer and more enjoyable. During the quiet moments, in-between rapids, they were able to jump off of their rafts, doing back flips and other high-flying acrobatics. Greg recalls how he was able to do a picture-perfect backflip off their raft. When he surfaced from the water to make sure the cameraman captured his feat, he found the cameraman gasping for breath as he had fallen out of the raft, the moment Greg decided to his flip. As everyone was now riding back together on the bus, returning to the Ranch, the young cameraman is still reeling from his event, clutching his chest and taking short breaths, laying down on the bus. Greg knew this was the perfect time to remind the cameraman of the crucial footage that was lost the moment he was drowning. “YOU HAD TO BE DROWNED DUDE AND YOU LOST THE SHOT!” The cameraman did not think that comment was funny.