It is such an encouraging breath of fresh air to have a conversation with those who are down to Earth and humble. Jack Hollis is one of these men and his life is a wonderful, joyful testimony of the faithfulness of the Lord. Greg Lancaster was recently honored to be able to sit down with Jack and talk about the horrific motorcycle accident that Jack suffered, that God ultimately completely kept him through. Both Jack and his wife Shelly enjoyed riding motorcycles. 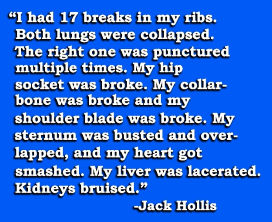 After years of enjoying life on two wheels, there was a peanut festival in Dothan, AL, and Jack had plans to go meet Shelly for lunch. As life would have it, he was late for leaving as he had originally planned and was heading to the gate where he needed to go. The weather was bad as it had been raining that day, and a bus was sitting in the median of the road. What Jack didn’t realize was that a vehicle trailing behind the bus didn’t see that it was stopped. As Jack explains, “she slammed on brakes and turned when she realized the bus was there. She turned sideways and blocked both lanes.” Jack is able to explain the scenario in detail, but this sudden event unfolded in less than 2 second. Jack pulled his handlebars as hard as he could and he immediately hit her car. “The back tire of [the motorcycle] hit the back tire of the car and the front tire went under the door and I flew up and hit the door.” Back then, cars weren’t made out of aluminum and plastic as they are today so that impact was immensely painful. Jack lists the broken bones and injuries that he suffered due to the accident, “I had 17 breaks in my ribs. Both lungs were collapsed. The right one was punctured multiple times. My hip socket was broke. My collarbone was broke and my shoulder blade was broke. My sternum was busted and overlapped, and my heart got smashed. My liver was lacerated. Kidneys bruised.” What made the situation indescribably worse, is that the doctors wouldn’t give Jack any painkillers when he was in the emergency room. The doctors had no idea what all was wrong with him. All Jack could say was “I’m on fire and I can’t breathe! I’m on fire and I can’t breathe”. As Jack recounts this horrific tragedy of pain, a doctor walked up right in between the doctors crowding around him and put a syringe in his side to release the pressure in his chest due to both of his lungs being collapsed and there was immediate release of the excruciating pain.

Shelly knew something wasn’t right when Jack didn’t show up to the peanut festival as he had told her he would be. On the way home, she saw the accident, and Jack’s bike. She walked right up to the first responders on scene. “Where is the man riding that bike?” After being told he was taken to the hospital, that’s where she immediately went. Once she arrived, doctors allowed Shelly to be there alongside Jack the entire time. “She was there at least 10 or 12 hours before she left me in there.”

Before Jack had even been taken to the hospital by the ambulance, he really didn’t know how bad his situation was. The reality of how bleak his situation was suddenly came to him when a paramedic was talking to a police officer, presuming that Jack was dead. “You might as well get homicide out here. He won’t make it to the hospital.” While laying on the stretcher, Jack uttered, “you shouldn’t say that in front of me”.  The paramedic thought Jack was unconscious, to which Jack responded, “not yet I’m not. I wish I was but I’m not.” The entire ride to the hospital, that paramedic apologized to Jack. 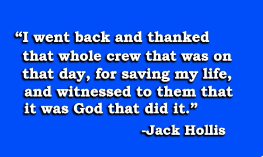 Jack obviously survived that horrific motorcycle accident as he is here with us today talking about. After his recovery, he went back to the hospital to express his gratitude and thanks to everyone that was involved with saving his life. “I went back and thanked that whole crew that was on that day, for saving my life, and witnessed to them that it was God that did it.” Jack recalls the importance of giving thanks by talking about then 10 lepers that were healed by Jesus, but only one that was made whole. Not only did Jack express his heartfelt thanks and gratitude to all of those responsible at the hospital for saving his life, but he took out a full-page ad in the local newspaper. “Everybody had knew that I had had a wreck. It was all over town. I wanted everybody to know how grateful I was that God had done that to me.” An event of such magnitude is going to mark you and cause you to reflect on many things in your life. He also asked for forgiveness of any wrong he had done to those in the community. “I asked for apologies from anybody I’d ever offended in anyway to go ahead and clean the slate.”