It is such an encouraging breath of fresh air to have a conversation with those who are down to Earth and humble. Jack Hollis is one of these men and his life is a wonderful, joyful testimony of the faithfulness of the Lord. Greg Lancaster was recently honored to be able to sit down with Jack and take the time to talk about the story of Shelly almost lost her life giving birth to their son Quinton. At this time of their lives, they lived in Daytona Beach, FL, driving their car over the sand dunes. Little did Jack know, Shelly suddenly started experiencing labor pains. Shelly had said that she needed to go to the emergency right then and there. When Jack arrived, the doctors on staff didn’t speak English. It wasn’t the most peaceful moment. Jack recalls the difficulty that he had trying to communicate with the doctors. “After they had her back there, they wouldn’t let me come back there. And I mean, they were hateful.” At this time in Jack’s life, he didn’t know the Lord, and it didn’t help the situation that he was drunk. Jack’s attempt to communicate with the doctors wasn’t helping the situation either. “I just really was so upset, and I was so belligerent to the doctors and nurses, and I cursed em’, and I yelled.” To make matters beyond worse, the doctors had to deliver the pressing bad news of Shelly’s condition. “We can’t do anything. She’s losing the baby and we’re losing her. You’re gonna lose both of them right now.” Jack pleaded with them, “you can’t do that! You can’t do that!” They had done all that they could do. 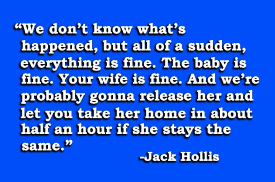 It was in that moment that Jack remembered that his mother had taught him to pray. Even though Jack didn’t know the Lord, and was drunk, he still insisted on calling out to the Lord. As Jack reminds us, “people say that God wouldn’t hear a sinner. Yes He will.”  And that is what Jack did. He prayed! “You know God. I love them. I may not show it, but I love them and I ain’t even seen the baby yet.”  Surprisingly enough to Jack, the Lord responded to him. “You showed your rear-end in that foyer in front of all those other people. Now you go back in there and talk to Me in front of all of them.” Jack didn’t have a doubt in his mind. He knew it was the Lord and obeyed to do exactly what the Lord had told him to do.  So there Jack was, on his knees, praying in a chair, in a hospital waiting room. You can imagine the judgments and thoughts of the people around who were witnessing this moment of a drunk man praying. As Jack highlights, “don’t ever judge that. It was the most serious moment of my life.” All he could ask the Lord was, “PLEASE! PLEASE!” What he didn’t realize, was that a nurse came up to him and interrupted his prayers. “I need to talk to you.” Jack’s worst imaginations took over. The nurse continued to share Shelly’s updated status. “We don’t know what’s happened, but all of a sudden, everything is fine. The baby is fine. Your wife is fine. And we’re probably gonna release her and let you take her home in about half an hour if she stays the same.” Jack’s prayers didn’t stop just because God answered his prayer. He gave thanks to the Lord, OUT LOUD! As Jack continues, “and let everybody in that room know it, and it was a witness to all of them that God heard a drunk.” Since that moment, Jack told the Lord that he would never touch another drop of alcohol again. God was so merciful to Jack as it was until 4 years later that Jack came to the Lord.

Jack may not have given his life to the Lord, but the promise he gave to the Lord was as heartfelt sincere as they get. As Jack explains, he is very serious about his promises. “I am fearful about keeping my word to God.” As Jack talks about being mindful of his words, he recalls a king in the Bible who was flippant with his words and said that the next thing that greets him, he would offer up to the Lord as a sacrifice. What this king didn’t know, was that it would be his daughter that would greet him. He was a man of his word and he sacrificed his daughter unto the Lord. As Jack points out, “but he kept his word”. Jack even once shared a message about that king and the important lesson that we can learn from him. Someone questioned Jack, “are you saying that he shouldn’t have killed her?” Jack replied, “I’m saying he should have said such a foolish promise”.