Home 7 Mountains of CultureFaith Mountain “GAZILLIONS” of Hippies on the Beaches Flock to Beach Preacher & Listen for Hours! The Jesus Revolution!
Faith Mountain

“GAZILLIONS” of Hippies on the Beaches Flock to Beach Preacher & Listen for Hours! The Jesus Revolution!

During the 1970’s, horrific tragedies were taking place across the nation as the daily news cycle and media were declaring continual calamities and heartbreak. Interest rates were steadily climbing, ultimately peaking in 1981 at the highest they had every been in our nation. Gas lines would stretch for miles. The Vietnam War was taking place. President John F. Kennedy was assassinated. Reverend Dr. Martin Luther King, Jr. was assassinated. It was as if increasing darkness was over an entire nation. BUT GOD! It was during these realities and events that the Lord poured out His Spirit sovereignly upon an entire generation that ultimately swept across the entire nation. This was the Jesus Movement! God did it then and He is about to do it AGAIN! 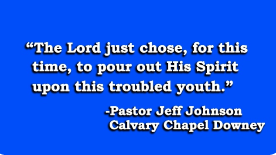 Can you feel the same oppressive heaviness in the land today? Everybody is feeling it. You are not alone. It’s a demonic strategy of the adversary because he knows his time is running out and the Lord is about to do great and mighty things again in such a holy and powerful way that it will dwarf what took place in the Jesus Movement. Pastor Jeff Johnson of Calvary Chapel Downey shares how the Lord touched an entire generation. “The Lord just chose, for this time, to pour out His Spirit upon this troubled youth”. David Guzik, Pastor of Calvary Chapel Santa Barbara shares how the Lord moved upon Chuck Smith, founder of Calvary Chape, to be the catalyst that would reach these young people. “What Pastor Chuck did was he brought these lives that were being changed in this outpouring of God, that is often being called The Jesus Movement, and he really connected them to church.” It’s incredibly important to understand how many perceived what the “Church” was and how Chuck Smith helped people overcome mindsets. Pastor Guzik continues, “Many expressions of the Jesus Movement were ‘anti church’.  They were sort of ‘anti-establishment’, but Chuck brought these lives that were being changed and he really brought them into the Church, and he really brought them into ministry.  He brought all the fruit down to the place simple enough to where we could receive it.” Nobody had in mind what the Lord was about to do, or what He was doing. Not even the hippies who were being drawn to the Lord Jesus Christ knew what God was doing. Only the Lord did! No man or religion could have worked up a sovereign move of God like this. It was the power of the Holy Spirit! 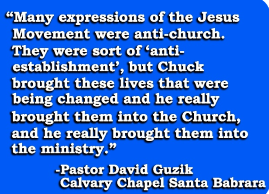 When we truly begin to understand that God loves us and has a plan for each and every one of us, and that begins to impact our hearts, there’s no telling what the Lord will do in our lives. It’s not about religion. It’s not about working something up or living a life of works in hopes of being acceptable before God. That’s exhausting and that’s not what God has called us to. That’s why He sent His Son, Jesus Christ, into the world. The Lord knew we couldn’t do it, so He sent His Son to live the perfect life FOR US! God never wanted you to live a life full of defeated mindsets. He called you to live full of liberation and freedom!

Pastor John Henry Corcoran, of Calvary Chapel Costa Mesa, was one of those hippies that was radically touched in the sovereign move of God during the Jesus Movement. As he remembers, “Gazillions of hippies crawled off the beaches of Southern California to come and listen to God’s Word being proclaimed by Pastor Chuck Smith.” There was such a hunger in the air to learn about Jesus Christ that people would listen attentively for hours. Pastor Corcoran continues, “the studies would go on for over two hours. He’d teach the Bible for hours.” These were the people that society deemed to be the least likely that could be brought to the Lord. But God had other plans. How could these people who were anti-establishment, anti-government, anti-God, be so hungry to learn and listen to the teachings of the Word of God for hours? IT’S GOD! 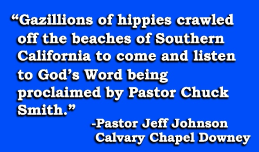 This is what it looks like when people are hungry for God! What is the number one sign of a healthy baby when they are born? They are hungry! You don’t have to remind them to eat! They are eating all day long! If this is true in the natural sense, would it be any different in the spiritual sense when someone is born again in Christ? Chuck Smith declared the simple truths of the Gospel: the Cross, the Blood, the Kingdom of God, repentance, sin and salvation. When people are hungry for God, just share the truth of the Good News of Jesus Christ and watch Holy Spirit convict hearts and draw people to Himself. When a sovereign move of God comes, it’s not going to be like it is now. Distractions and drudgery is everywhere in this present environment. When the Lord pours out His Spirit sovereignly, HE IS THE TOPIC. HE IS THE SUBJECT. ALWAYS. EVERYWHERE. When we begin to get a sense of what that looks like we suddenly realize the incredible urgency of preparing now so that we can be a part of what the Lord is doing. Are you preparing now?

A sovereign move of God will take everyone by surprise if you’re not ready for it. This is exactly what happened on Father’s Day 1995 at Brownsville Assembly of God, in Pensacola, FL. Evangelist Steve Hill was preaching that day on the Wonders of the Lord for Pastor John Kilpatrick. As Steve Hill was talking to everyone who was listening, every one is attendance was already referring to previous messages, thinking this was just another day. But everything changed when Steve Hill started praying. The presence started increasing, gradually, more and more, and there was sudden awareness God was here. Pastor John Kilpatrick declared, “GET IN! THIS IS GOD!” Imagine you knowing that God is coming and you can take this time now to prepare for this great sovereign coming move of God! This is that! GET READY! GET READY! GET READY! GOD IS ABOUT TO DO IT AGAIN!

The Great Resignation! “38% of Pastors Have Thought About Quitting Ministry”...