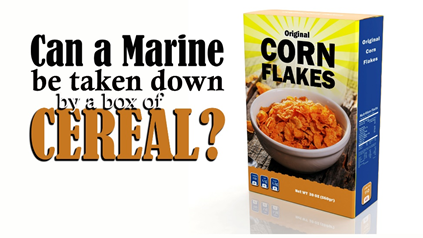 We are so incredibly grateful for our men and women servicemembers who lay down their lives to fight for and defend our nation. They selflessly stand in the gap against our nation’s enemies. But what about a box of cereal? In this humorous moment, Greg reminds Steve of the humbling moment of how he began one fateful morning, like every other morning, preparing breakfast and eating his breakfast at his kitchen table. As Steve recounts it, he recalls making his bowl of cereal and setting it on his high-top kitchen table, and attempting to sit in a high top barstool type chair. “I just went to sit down, and I twerked just the wrong way… and AHHH UHHHH…I like pulled a muscle or something in my lower back”, and that was it.  He was down for the count. Who would have thought? Attempting to enjoy a bowl a cereal, and now he’s on the floor, in the fetal position, in excruciating pain. What has the training of our military forces come to? Is this really America’s finest fighting force! The good news though, he had eggs for breakfast this morning, and he got rid of the high-top barstool chairs.