Home 7 Mountains of CultureFaith Mountain The Great Resignation! “38% of Pastors Have Thought About Quitting Ministry” says Barna Group as Gross Darkness Is Increasing in the Land
Faith Mountain

The Great Resignation! “38% of Pastors Have Thought About Quitting Ministry” says Barna Group as Gross Darkness Is Increasing in the Land

It doesn’t take long to look around the daily events happening in our world in order to recognize that gross darkness is taking place. It’s getting darker and darker as each day passes. This is why we are here right now, talking to you on the Greg Lancaster Show, to bring light to you, and encourage you. God has called those who follow Jesus as their Lord to be the Light of the World.  We’re even called “Children of the Light.”  The darker things get, the brighter you, as a believer, get.  Be sure not to catch yourself screaming at the darkness, instead of Lighting a candle and “being the Light” that Kings will come to.  We knew this day was coming and now it’s here. This is a moment in time when we have to recognize and ask ourselves the question, “was God the God of someone else’s life, or is He God of my life?”  “Am I serving darkness while claiming to be “the Light, which God showed Greg in a prophet dream?”  This is an important eternal question for us to ask. Everyone is feeling this pressure upon them. Even pastors.

According to a recent study conducted by the Barna Group, “38% of pastors have thought about quitting full-time ministry in the past year.”

This is a staggering reality. Remember, pastors are people too. They feel the same pressures you’re feeling. The effects of the COVID-19 pandemic, and governments over reaching response, is causing many to suddenly walk away from their jobs, which is being known as the “The Great Resignation”.  We’re seeing Pastors walk away from their churches, shepherds walking away from their sheep.  We understand the heaviness of this hour, but DON’T QUIT

David Kinnaman, President and CEO of Barna Group, highlights the reality that pastors are feeling the same effects that many millions around the nation are feeling as well, and how the pandemic has caused many Christians to walk away from their churches. ‘During and after the pandemic, about a third of Christians, practicing Christians disengaged, from their congregation, just sort of stopped showing up.’ As CBN News reports from this same study, “4,000 churches closed in 2020 and 20,000 pastors left the ministry”. In addition to those staggering realities, “50% of pastors say they would leave the ministry if they had another way of making a living.” If the difficulties of these days are not enough, many are also experiencing the troubles and divisions of the heightened opinions regarding the vaccines and mask mandates. 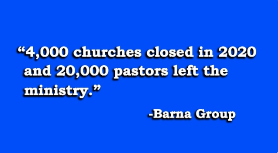 Do you feel like there is a constant heaviness of demonic, oppressive, sad, weight upon you? You are not alone. Everyone is feeling this right now. It’s a demonic strategy of the adversary. What we are witnessing is a demonic strategy to keep people constantly changing the popular narrative, to create their desire outcome, which is division, polarization. It’s Rules for Radicals. People are trying to define success in this present environment where the very definition of success is constantly changing.   There is no “finish line” in this current demonic happening, outside of turning to Jesus.  As Marshall Ganz says, “Community organizers have to be well-integrated schizoids.”  Someone who has schizophrenia is someone who has lost their mind. This isn’t a logical argument. God is not limited by the presence of increasing darkness in the land. In the 1970’s, the Lord poured out His Spirit sovereignly upon an entire generation and a nation. He is about to do it again! There were horrific tragedies taking place in the 1970’s. Rebellion was everywhere. What is different about today? If you’re feeling all these things taking place, don’t put your focus on this life. Focus on the Lord! Just as the Lord moved right in the middle of darkness and tragic headlines in the 1970’s, He can and He is about to do it AGAIN! GET READY!   As the old hymn says “Turn your eyes upon Jesus and the things of this world will grow strangely dem”  including man’s feeble attempt to remove the knowledge of God from the earth.