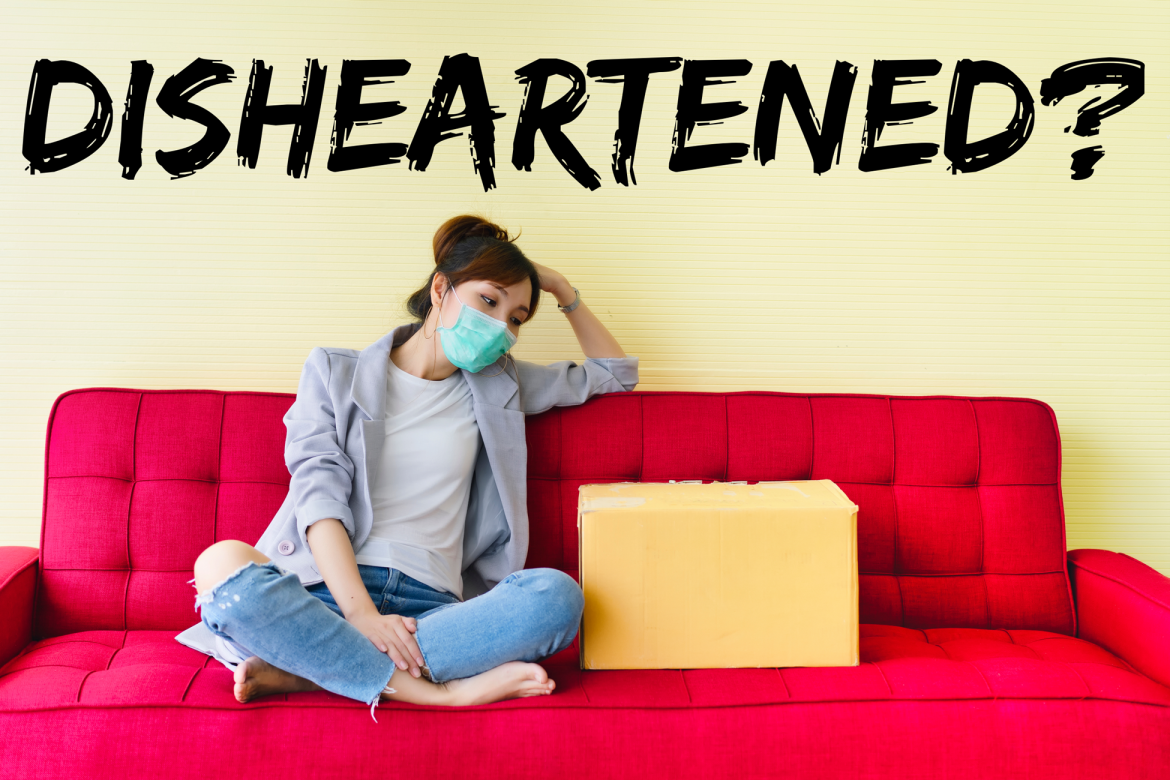 Today so many people are “searching” for the next prophetic word.  They are sharing prophetic words that “popped up” on their “carefully programed, by people held captive by darkness, news feeds” on their social media, or media they see appear in their search engines searches and online experience.

Disheartened is defined as “to cause someone to LOSE DETERMINATION or CONFIDENCE.” How could this be with so much “prophecy”?  Isn’t prophecy meant to build up someone, encourage, edify or to turn someone to the righteous way?  With so much prophecy, why are so many people disheartened.

“You foolish Galatians! Who has bewitched you?…You were running a good race. Who cut in on you to keep you from obeying the truth?  THAT KIND OF PERSUASION does not come from the one who calls you.”  Galatians 3:1, 5:7-8

I am watching the lights of those who once walked close to the Lord, with the brightest of continents who had great determination and confidence in God flicker as if they could easily be extinguished.  I am watching them walk around in a haze.  I am seeing those who once walked with great boldness and confidence hiding out from those they once stood boldly before.  I am watching depression become a part of their daily lives. I am watching those who once listened to and believed God’s true authority in their lives now only consider their words as suggestions, while at the same time searching for this next prophetic word from someone they don’t have a clue who they are or their fruit.  I am watching God’s people walk around in a fog of despondency [gloom, sadness, misery, hopelessness] while at the same time sharing the most recent prophetic word they found or heard.

When looking into scripture we can find the answer to this very question.

“You disheartened the righteous with your lies [false prophecies, vision and words], when I had brought them no grief, and because you encouraged the wicked not to turn from their evil ways and so save their lives, therefore you will no longer see false visions or practice divination. I will save my people from your hands. And then you will know that I am the Lord.’”  Ezekiel 13:22-23

Realize someone who says they are a prophet are saying they hear and see what God is saying to you or others and they are telling you what they heard and see.  Though people can prophesy who are not prophets they too can falsely prophesy and not be of God, just like some “prophets” are not of God.  It’s important to know that satan has prophets, we call them prophets of Baal, and God has prophets.  One leads you astray from God and the other leads you to God. One is fierce and one is bold. One speaks lies, from the “father of lies” and the other speaks truth, from the Father of Truth; Father God.  Your eternity can ride on your knowing the difference.

One way to tell if a word is from God and for you is if it brings you closer to God, turns you away from sin, and leads you to a place of holiness making you more confident in the things of God and more determined.

One way to tell if a word is not from God to you is if it says good things about you, your future, and your present condition, but leaves you disheartened; without determination and without confidence.  God is not going to give you a word that leads you away from Him.  He loves you and knows your destiny is determined on how you will follow Him; Jesus’ Lordship in your life.  Hell is real, God is never not aware of it, and does not want that for yours or anyone’s future.  He never rejoices when the wicked die for He would rather them repent, be forgiven and in right relationship with Him to live in eternity with Him.

Ezekiel 13 shares explicitly how God feels about those who give false words saying “thus sayeth the Lord” when He never said such things.  It does not go well for those who practice such witchcraft.  God sees what they are doing and cares about those who they have taken captive by their words, locking them in places of sin and rebellion towards Him.  Pray that the Lord frees you and others from any false prophetic words that have led you astray, to being disheartened that He would lead you back to Him; to that place of joy, love, fulfillment, and confidence in Him.

Cain was downcast, not because of outside influences, but because of what was in his heart; sin. All he had to do was to repent from his hatred and resentment of his brother and to love and honor him.  This is God’s word to him.  All he had to do was follow the Word of God to him and his joy would have returned along with his determination and confidence.

False prophets keep people like Cain in their sin.  They tell the “Cains” you are ok.  God’s got this.  It is all under the blood.  There is no condemnation.  God understands.  God sees how things are not fair between you and Able.  All this advice like this is someone speaking “For God!” i.e., they are saying or moving as a “prophet” one who allegedly heard the voice of God and are telling the “Cains” of your day what God says, when God did not say anything like this in “their context” of their current situation, i.e. sin.  They are leading God’s people astray!  God does not tell someone all these false words.  These are words that keep the “Cains” of this day in their sins.  They are not of God, they snare “Cains” in their sin, lure them by the veiled motives and entrap them to be “their friend” their “church member” their “inner circle” etc.  All while leading them straight to hell.

God sees what they, these false prophets, have done and will work to free His people from their veiled snares, and He will take care of them.  He will lead them to repentance and into an abiding relationship with Him.  You, though, will be uncovered and all your evil practices of witchcraft; false prophecies will be unmasked.

God’s people will once again be encouraged, edified and their confidence will return.  No longer will they be disheartened by your false, lying words that you carefully wove together in your soul to “manipulate” them which had nothing to do with God.  The shocking thing is, you actually expected your words, spoken out of your own mind to come to pass; crazy, demonic.

It’s time God’s people stops searching for words and start searching for God.  “You will seek me and find me when you seek me with all your heart.”  Jeremiah 29:13 For in searching for God, you will hear His voice.  “My sheep listen to my voice; I know them, and they follow me.”  John 10:27

It is time to awaken to the reality of the devesting effect listening to and watching false prophets has done to you.  Stop looking for a word, and start looking for God.  Stop trying to find a word that “makes you feel good” while at the same time “disheartens” you and causes you to lose your determination and confidence in God.  No longer search for prophecy the way someone shops for groceries going from store to store, market to market leaving this one, taking that one, getting a portion of another.  Whoever does that does not have a prophecy, they have a graven image.  Realize a true word, a word given by a true prophet comes to pass, draws you closer to God and away from sin while leading you to a deeper determination in God and a strong confidence in Him.

Jesus didn’t say we know the difference between true and false prophets by their words.  He said we know them by their fruit.  If you don’t know their fruit, YOU DON’T KNOW THEM and you can’t fully trust in their word.  Know those who labor among you, we are told.  If you don’t know them, how could you know their fruit?  Jesus clearly tells us “Watch out for false prophets. They come to you in sheep’s clothing, but inwardly they are ferocious wolves.  By their fruit you will recognize them.”  Matthew 7:15-16

I want to encourage everyone who claims they are sharing the prophetic word of the Lord to speak in the fear of God, willing to pay the consequences and be openly rebuked for not doing so; open for correction so as to not mislead God’s people.  To feel what God feels when your words lead God’s people to be “disheartened” and “misled” and to repent and let the person to whom you told “a prophetic word to” that was not of God that it was not of God.

It is time for you, God’s beloved, to return to your confidence in the Lord, to regain your determination. Break free from the demonic fog of despondency.  It is time for you to return to the Lord, placing yourself once again under God’s established authority in your life and to listen to that authority as you once did so as to be free again from your depression.  It is time to stop searching for words and start searching for God knowing that You’ll hear His voice as you do.

Finally, it is time to hold yourself accountable before God for the decisions you are presently making that are keeping you away from where God would have you to be.  To repent from the sin of despondency and return to the Lord and a life of joy, happiness, pleasure in abiding with the Lord.

“For I know the plans I have for you,” declares the Lord, “plans to prosper you and not to harm you, plans to give you hope and a future. Then you will call on me and come and pray to me, and I will listen to you. You will seek me and find me when you seek me with all your heart.” Jeremiah 29:11-13

It is important to realize the context even of Jeremiah 29:11-13.  God was sending His people to a time of exile, discipline, because they refused to repent for their sin.  He was sending them to Babylon, and this was the promise He was giving His people that He would not fulfill at the moment He gave this word but would fulfill 70 years later to the day!  It was a promise.

Choose to no longer do the works that have led you to be disheartened.  Return to the joy of the Lord!  Your Father will once again welcome you just as He did the prodigal when he returned to the Father.  He will welcome you with open arms! Return today to your First Love! Revelation 2:4-5

May the grace of our Lord Jesus Christ encircle you and His voice lead you as you abide with Him.