Israel celebrated the nation’s 70th year anniversary on May 14, 2018! This was such a historical and exciting celebration. May 14, 1948 was the day everything changed for Israel and that it was announced the Jewish state would be reestablished and at that point, Israel was considered once again as a nation.

At the celebration Vice President Mike Pence spoke declaring how President Donald Trump has kept his word on everything he has said about Israel. Also, reportedly as many as forty United Nation Ambassadors visited Israel, and this was a total of 20% of the UN Ambassadors! They spent time with President Reuven Rivlin and Prime Minister Benjamin Netanyahu and visited many sites in the nation. One UN Ambassador shares about his experience in Israel. “This has been a fantastic experience,” Ethiopian Ambassador Tekeda Alemu said after visiting the Western Wall. “My fellow ambassadors and I learned many lessons. One lesson was the fact that there is a clear connection between the Old City of Jerusalem and the Jewish people. That is something that cannot be ignored.” Jerusalem Post reports: “The purpose of the trip is to give the ambassadors, who are often called upon to vote on Israel-related issues – and who generally don’t vote in Israel’s favor – a firsthand look at the challenges the country faces and to emphasize, in light of recent UNESCO votes that have sought to erase a Jewish connection to Jerusalem, the Jewish people’s link to the historical capital.”

Deputy Minister of Public Diplomacy, Michael Oren, who is also a historian shares how at the time that Israel became a nation, the Jewish state was not in the best condition. “Then there were 600,000 people here, about the size, half the size of a mid-sized American city and with basically handguns fighting six Arab armies that came within 25 miles of Tel Aviv. It’s hard to imagine, [they] surrounded Jerusalem, not far from where we are sitting.  [Israel had] no economy, no allies [and] a population that was still languishing in displaced person camps in Europe after the Holocaust. I mean, think about that.” Now seventy years later as the world has seen, Israel has grown and is the world leader in many industries. Gurion says, “Our economy has one of the most highest growth rates in the world. We have one of the most powerful armies in the world; we’re a world leader in technology and Israel is regularly listed as one of the seventh or eighth most powerful countries in the world.”

Also, at the 2017 Christian Media Summit, Prime Minister Benjamin Netanyahu answered the question, why does Israel reach out to help so many other nations when it’s surrounded by enemies on all sides? Prime Minister Netanyahu responded, “Because we’re a light to the nations. It’s a fulfillment of that great prophecy. In fact, that is what Israel is doing. It’s doing it in places like Haiti and the Philippines or Mexico.”

He also shared at AIPAC 2018 how Israel’s economy is booming, the nation is a leader in technology and is very strong in cybersecurity. Prime Minister Netanyahu shared many more of the nations successes and plans at AIPAC.

It is exciting to see Israel succeed and to see the answer to prayers that many have been praying for, for years and years. As Genesis says, “I will bless those who bless you, and whoever curses you I will curse; and all peoples on earth will be blessed through you.” Israel is truly blessing the world and as a nation, shining forth the light of the Lord to the World! We want to hear from you!

May 14 – the moving and celebration of the U. S. Embassy moving to Jerusalem and the prophetic significance

We are excited to report on this historical and prophetic move of the U.S. Embassy from Tel-Aviv to Jerusalem. This is an exciting event that is an answer to many prayers and the start of many 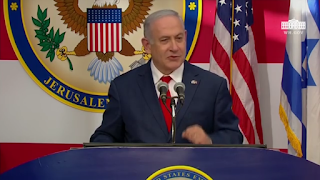 more prophetic events that will take place. “The Jewish People have been praying and working toward the day that Jerusalem becomes a praise among the nations,” Rabbi Gimpel reported by Breaking Israel News, and he shares a verse from Isaiah ‘I have posted watchmen on your walls, Jerusalem; they will never be silent day or night. You who call on the Lord, give yourselves no rest, and give him no rest till he establishes Jerusalem and makes her the praise of the earth.’ Now, we are seeing just the beginning of this prophecy as nations begin moving their embassies from Tel-Aviv to Jerusalem,” Rabbi Gimpel said. “This is a step in the prophetic process of redemption…I would encourage those who say that President Trump is not a holy man and therefore can have no place in this Godly process to look to the book of Isaiah and Ezra where the divine plan of restoration was done through a man named Cyrus,” Rabbi Gimpel said. “It would be a tragic mistake to view this historic move as unintentional or a coincidence, coming, as it does, on Israel’s 70th anniversary.” 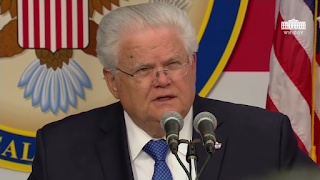 Pastor John Hagee is the founder and senior pastor of Cornerstone Church in San Antonio, Texas. In 2006 Pastor Hagee founded and is the National Chairman of Christians United for Israel (CUFI), a grass-roots organization which has grown to become the largest Christian pro-Israel group in the United States with over 3.5 million members. He expressed his joy and excitement over this move of the U.S. Embassy. Reported by Breaking Israel News Pastor Hagee gave the benediction at the embassy ceremony. “I was deeply honored to participate in this historic moment. Jerusalem is the eternal capital of Israel, and I am very proud of my country and my president for recognizing that fact,” said Pastor Hagee. “This moment would not have been possible were it not for President Trump’s courage and the unwavering commitment of CUFI’s 4.1 million members.” Pastor Hagee also shared on Fox News about President Donald Trump. “He will be remembered for thousands of years for his act of courage to treat Israel like we already treat other nations.”

Reportedly over 800 people attended this ceremony from the United States and Israel. Prime Minister Benjamin Netanyahu shared his gratitude with President Trump. “What a glorious day. Remember this moment! President Trump, by recognizing history, you have made history. All of us are deeply moved. All of us are deeply grateful… Last December, President Trump became the first world leader to recognize Jerusalem as our capital, and today, the United States of America is opening its embassy right here in Jerusalem,” he said. “Thank you, President Trump, for having the courage to keep your promises!” President Trump addressed the gathering by video saying, “The U.S. will always be a great friend of Israel and a partner in the cause of freedom and peace. We extend a hand in friendship to Israel, the Palestinians and to all of their neighbors. May there be peace. May God bless this embassy. May God bless all who serve here, and may God bless the United States of America.” 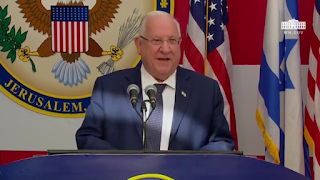 Israeli President Reuven Rivlin shared, “Every U.S. President has promised to move the American embassy to Jerusalem. Finally, we have a leader who promised this, and also kept his promise! The Israeli people thanks you for keeping your word, for your courage, for your determination and for your firm, unwavering stance alongside the State of Israel,” he continued. “We hope and expect that other nations will follow your path and your leadership. We will continue to safeguard Jerusalem as a city of peace, as a home to all those of faith, a city of all its residents and citizens, of all religions and communities, who share together one city, which is so greatly loved by everyone.”

We are very encouraged by this answer to prayer of the U.S. embassy moving to Jerusalem. We at VFNKB have prayed for years as have many others around the world for this to take place. And we will continue to pray for and bless Israel and ask you to do the same as well. As Genesis says, “I will bless those who bless you, and whoever curses you I will curse; and all peoples on earth will be blessed through you.”