Original Posting –     In Six Minutes Economy Falls, by John Ramos (Dream)
I was at work and everything stopped and stood still.  A very large group of people were gathered around the TV.  It was like a breaking news or live report.
The anchor was at Wall Street reporting from what looked to be from the NY Stock Exchange because I saw brokers in blues jackets.
The reporter says I guess you are all wondering why we are gathered here today. It was very quiet and like all the air was sucked out.  He said before I share what I am about to share I don’t want anyone to panic.
I already knew what he was about to say.  I went back to my desk real fast to get my things so I could leave before this broke.
As I was coming back to leave I heard him say. That in six minutes the world was coming to an end.
That’s when people were letting out gasps of air.  Then I started yelling or talking louder above the clamor.  “The Lord told us about this. Go the blog.  He already told us.” People were starting to look at me like really.
Then next scene I was leaving to go get everybody together.
It’s all coming down.  The reporter is the prophetic voice forth telling this is going to go down.
Wall street represents the economy.
6 minutes represents the flesh and idols.
PWDV
This is a snapshot of original prophetic post documenting when it was original posted. 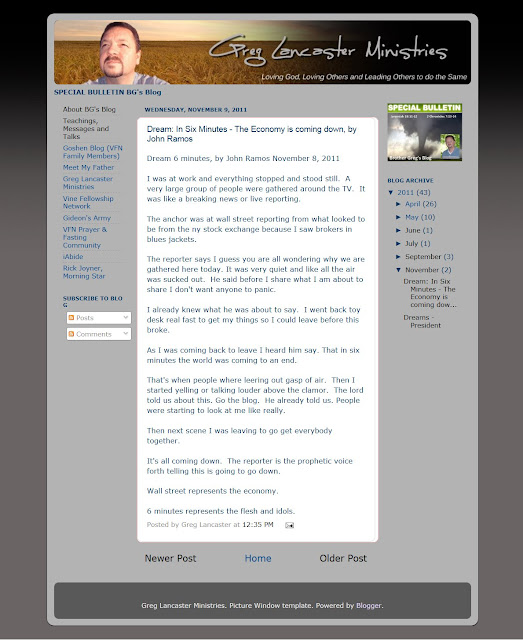