Un Invite yourself from Your Political Parties , Who You Know didn’t Invite God

Greg, John and Pat continue their conversation regarding voting and community organizing.  They share how although many community organizations are separate, some are connected to (PICO) Pacific Institute and Community Organizing.  They share that PICO is allegedly trying to make this election something it is not.  They are grabbing a hold of Dr. Martin Luther King’s vision and try to make it what they want it to be.  God used Dr. King to bring a nation to a place that it wasn’t able to go to.   However, Dr. King’s niece, Dr. Alveda King, continues to carry his vision on but this is not the case with PICO. They are taking his vision and using it in their communication with literature, displaying an African American young male with hands bound and American flag bandana with the caption “Let My People Vote”.  There have been significant wounds that have taken place that require healing.  Where should this healing come from.  Bishop EW Jackson says that the Democratic Party (for decades) has been moving to an anti-Christian direction. These political parties are over.  As Christians, we are value voters. We should not vote parties, candidates or platforms, but rather God’s values.  In addition, PICO is allegedly using this political atmosphere to raise money. As Bishop Jackson says, they are using what has happen to the African American people in our nation for their agenda and not for the African American or minority.   According to CBN, Christian Broadcasting Network, 67 percent of African Americans are in support of voter ID’s, they too want to defend their right to vote.  Everybody matters; one man, one vote.  We are a republic form of government where every citizen deserves to be represented. 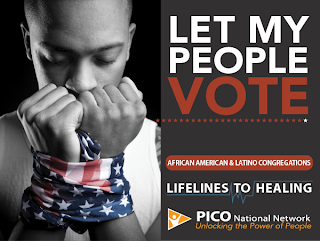 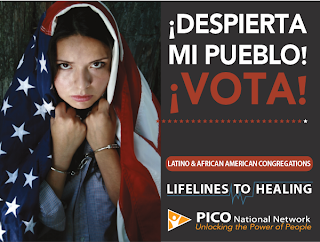 Parties are Over: It’s time to Vote Values
How Should Christians Vote? Tony Evan
Dr. King Helps us Vote; Values
Check with Jesus Before You Vote