Home Prophecy Is Valerie Jarrett the De-facto President?
ProphecyProphecy for AmericaProphetic Words from Oct 2016 and Older

Is Valerie Jarrett the De-facto President?

LISTEN NOW! Greg, John, and Pat continue their discussion and continue to discuss a question that has been asked and that is; Is Valerie Jarrett the De-facto President of the United States?  They continue to discuss the interview Valerie Jarrett, senior adviser to President Obama, had with Politico that aired on C-Span as she recounts how she first met the President.  Valerie explains that she was recruiting Michele Obama from the law firm to work in public service and Michele did not want to make that decision alone and invited her then fiancé Barak to meet Jarrett.  Valerie shares she saw how the President listened to Michele and to her.  America is in a bad state and it is important to find out what spirit America is under.  They further discuss some of the things that author Scott Berg wrote about in his book Wilson that confirmed some of the things the Lord has shared with us regarding President Woodrow Wilson.  One such thing was that after President Woodrow, who was selected, first wife passed away he went into a deep depression and was “given” a new wife.  During his administration he had suffered a stroke and was sequestered to his room by his second wife who limited access to him.  It is reported that his wife and doctors were the only one who had access to him.  Every single document had to go through his wife.  He was never alone she was present everywhere he went. They continue to discuss what appears to be a similar thing happening with Valerie Jarrett, Senior Adviser, and President Obama.  It is reported that the President trusts Valerie completely and is a close friend that has been reported as often the last one to leave meetings in the oval office and also has access to the President’s home in the White House.  They further discuss an interview conducted by Steve Doocy, Fox News correspondent, and Ed Klein, author of the book The Amateur.  In this interview Ed calls Valerie Jarrett the De-Facto President of the United States.  The truth is that America voted Barack Obama as the President alone.  The president describes his relationship with Valerie Jarrett as “one of my oldest friends, over time I think our relationship evolved to the point where she’s like a sibling to me. I trust her completely.”  Valerie is also described as best friend to the first lady and soul mate to the President.  We are seeing that the spirit of America is seduced authority.  They continue to share that if Valerie is indeed assisting the President and is in a supportive role to his ideas and agenda then surely there is nothing wrong with that as we have seen this work with President John F. Kennedy and his brother Attorney General Robert Kennedy.  They continue to discuss the symposium that took place at the John F. Kennedy library regarding the selection of Senator Barack Obama for president of the United States.  What we are seeing in the White House is a result of what is happening in our house.  The President said himself I am a Christian just like most Christians in America.  They continue to discuss how there are some things that he wanted but he could not do.  Jezebel was happy to do it for him all she needed was his ring.  The Bible says we know them by their fruit.  Allegedly Valerie Jarrett has been credited with many of the blunders of this administration starting with and not limited to urging the president to put a mandate on church related organizations that were required to give free health care for contraceptives.  Fox continues to report that when the President’s chief of Staff invited Cardinal Dolan into the Oval Office to try to get the President to take a change of course, it is reported that Valerie “blew her stack and Bill Daley was shortly ushered out.  There were others suggesting the President go to Copenhagen to get the Olympics in Chicago as a host city since that would bring billions of dollars to the city.  This is the same city where Valerie is from and she served as Chief of Staff to former longtime Chicago mayor Richard Daley.  This is not something the President of the United States does and it put the president in a position to fail in which he did before the world.  They continue to mention at least a handful of other occurrences in which allegedly Valerie appears to be running the President’s agenda.  They continue to underscore the importance of praying for the President of the United States Barrack Obama and for God to speak to him directly as he has spoken many times to leaders in the Bible.  Also pray for Valerie Jarrett that her counsel would be only just counsel and not directives to the President of the United States. 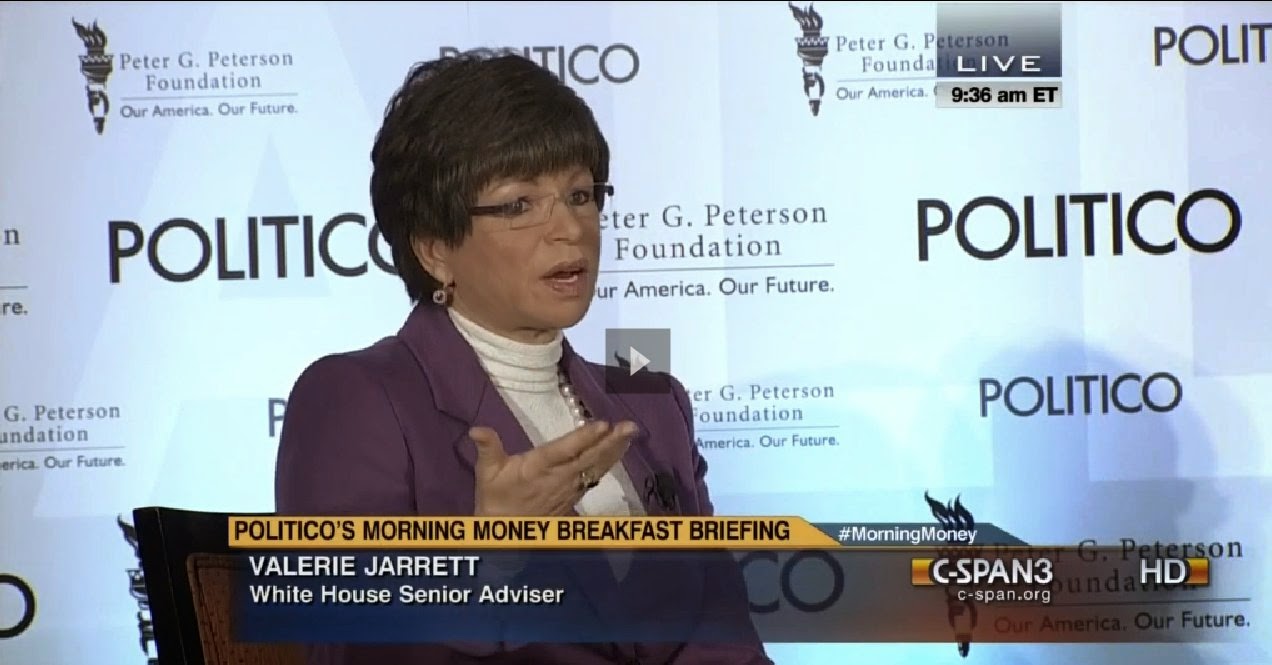 Valerie Jarrett was interviewed by Ben White at Politico’s Morning Money Breakfast briefing. She outlined President Obama’s continuing agenda in his second term focusing on raising the minimum wage and energy, and she talked about her long friendship with President Obama and First Lady Michelle Obama. She also answered questions on extending federal unemployment benefits, President Obama’s relationship with business leaders and Republican members of Congress, and his presidential library.

Woodrow Wilson Selected before Elected and was his wife the First Female President? Is there any relationship with the Obama Administration?
Was Our President Selected Before He was Elected? Are They Using Tips from Lucifer to organize America and the World?
The Ayatolla, Iran’s Leader, Calls PM of Israel a Rabid Dog? – Iran WILL NOT get Nuclear weapons, says PM Netanyahu
Atheist “Mega Churches’” Global Phenomenon
Don’t Be Distracted!: Keep Your Eyes on Israel
What Are We Doing? Are we Really going to ease Sanctions on Iran- Forcing Israel to seek help from Russia?
PWDVVFN    PWDVUS
When we know better, we always try to do better.  Retractions & Restatements
0
FacebookTwitterPinterestEmail