Prophetic Fulfillment Fathers and Sons Hearts Turning Back to each Other 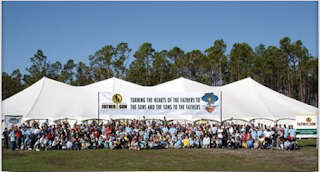 LISTEN NOW! Greg, John, and Pat discuss the prophetic fulfillment of the Malachi 4:5-6 prophecy in the turning of the hearts of fathers and sons to each other.  They discussed a divine encounter with Pastor and Pensacola Police Captain David Alexander, as they shared many things one of which was how David and his son were so touched at the Father and Son Camping Trip and how their relationship has been forever changed as a result.  They continued to share how they have met many men in the community who as boys who were a part of the prophecy and are now husbands and fathers.  God has done a great work.  May His will be done in the earth.