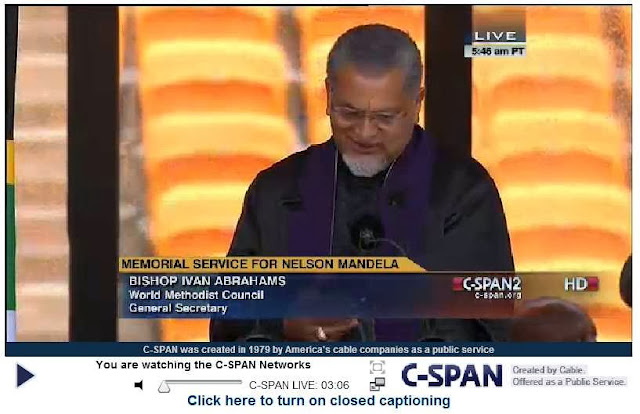 World leaders gather in Johannesburg for a memorial service for former South African President Nelson Mandela who died Thursday, December 5, at the age of 95. President and Mrs. Obama are leading the U.S. delegation.  They will be accompanied by former Presidents George W. Bush, Bill Clinton and Jimmy Carter, as well as members of Congress and other dignataries.
Mandela spent 27 years in prison under the apartheid regime, and then became South Africa’s first black president in 1994, after the nation’s first all-race elections. He served only one term in office.
The former president had been ill in recent years and had not made a public appearance since 2010. He has suffered from a number of respiratory ailments, which many link to his time in prison, where he contracted Tuberculosis.  His funeral will take place later this week.

After learning of the news, President Obama made a statement to reporters at the White House, and recalled the impact Mandela’s writings had on his own life and career. UN Secretary General Ban Ki Moon also paid tribute to the the former South African leader. Mandela to be buried December 15 in Qunu, Eastern Cape. You can watch both statements here on C-SPAN.org and read tributes from other world leaders and U.S. public officials.
British Prime Minister David Cameron said:

“A great light has gone out in the world. Nelson Mandela was a towering figure in our time; a legend in life and now in death – a true global hero. Across the country he loved they will be mourning a man who was the embodiment of grace. Meeting him was one of the great honors of my life.

My heart goes out to his family – and to all in South Africa and around the world whose lives were changed through his courage.”

“Laura and I join the people of South Africa and the world in celebrating the life of Nelson Rolihlahla Mandela.  President Mandela was one of the great forces for freedom and equality of our time.  He bore his burdens with dignity and grace, and our world is better off because of his example.  This good man will be missed, but his contributions will live on forever.  Laura and I send our heartfelt sympathy to President Mandela’s family and to the citizens of the nation he loved.”

“Today the world has lost one of its most important leaders and one of its finest human beings.  And Hillary, Chelsea and I have lost a true friend.

History will remember Nelson Mandela as a champion for human dignity and freedom, for peace and reconciliation. We will remember him as a man of uncommon grace and compassion, for whom abandoning bitterness and embracing adversaries was not just a political strategy but a way of life. Our thoughts and prayers go out to Graça and his family and to the people of South Africa. All of us are living in a better world because of the life that Madiba lived.  He proved that there is freedom in forgiving, that a big heart is better than a closed mind, and that life’s real victories must be shared.”

Former President George H.W. Bush said in a statement:
“Barbara and I mourn the passing of one of the greatest believers in freedom we have had the privilege to know.  As President, I watched in wonder as Nelson Mandela had the remarkable capacity to forgive his jailers following 26 years of wrongful imprisonment — setting a powerful example of redemption and grace for us all.  He was a man of tremendous moral courage, who changed the course of history in his country.  Barbara and I had great respect for President Mandela, and send our condolences to his family and countrymen.”