History of Pensacola and It’s Significance for Today 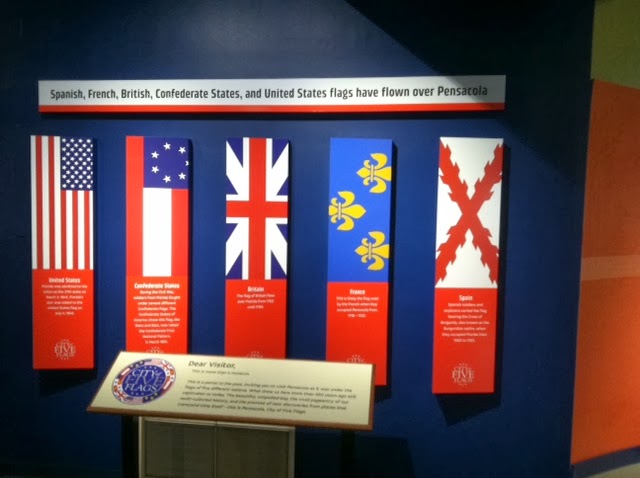 LISTEN NOW! Steve, Greg, and Pat discuss a recent trip as Steve ventured to a museum of Pensacola history. As Steve has only lived in Pensacola a few years, not exactly a native, what he learned was surprising. Pensacola is known as “The City of 5 Flags”. This name comes from the 5 different nations that controlled Pensacola: Spain, France, Great Britain, The Confederate States, and The United States.  As Spain explored and made new settlements, Christian missions played a significant part of the explorations throughout Florida including Pensacola. What was surprising to learn was that as Spain would explore new areas and established settlements, Great Britain would immediately be behind on their heels seeking to take back the land for British control. This struggle for power went back and forth in the early beginnings of Pensacola. Steve shared that it reminded him much of the history that was shared in the movie “Monumental”. People were looking to come out from under the oppression of the British leadership seeking their own land for freedom. During the time of learning, what stuck out to Steve most was a major slice of American History, The Battle of Pensacola. Little did he know just how significant this battle was in the formation of the nation.  During the struggle of back and forth control for Pensacola, Great Britain once again took control.   On January 1, 1777, the King of Spain, Carlos III receives this news. In response, he then delegates the young 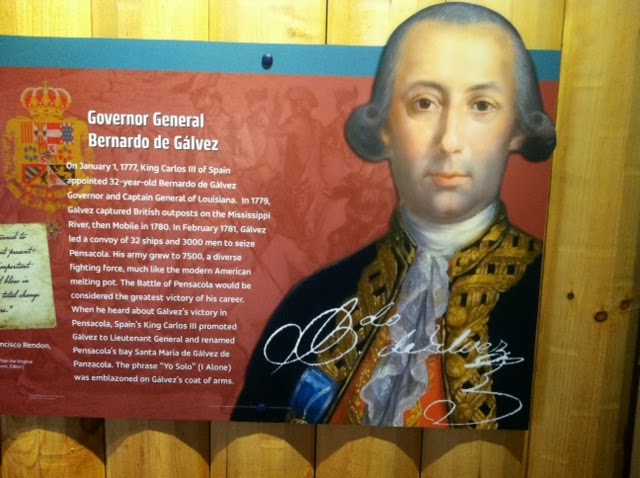 Captain Bernardo de Galvez to take back control of Pensacola for Spain. Galvez then leads a fleet of 30 ships through the Gulf of Mexico to Pensacola where the battle ensued. Galvez ordered his fleet to push into the bay of Pensacola. His troops disobeyed his commands commenting on the cannon fire that they would receive. Galvez then steers his own vessel, amidst cannon fire, secures land south of Pensacola, and then orders his fleet to follow his leadership. The battle ensued for weeks. On May 8, 1781, during an early morning surprise attack, a specific howitzer round was directed towards the British fort in the Northern part of Pensacola, “The Queen’s Redoubt”.  What is significant about this particular shot fired is what was going on behind British lines at the time: two British soldiers were walking into thegunpowder room, doors opened in the Queen’s Redoubt. At this exact moment the howitzer round impacted the gunpowder room causing the explosion that destroyed this British Fort.  The destruction of this specific fort finalized the victory for Galvez at the Battle of Pensacola.  What is vital about this battle was the reality that then President George Washington, was in 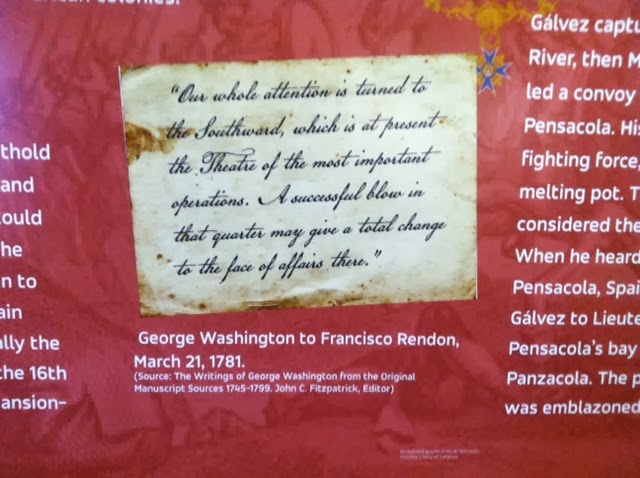 communications with Spanish forces regarding the outcome of the battle. What he wrote highlights the importance of this specific battle

“Our whole attention is turned to the Southward, which is at present the Theatre of the most important operations. A successful blow in that quarter may give a total change to the face of affairs there.”-March 21, 1781
At the time of The Battle of Pensacola, George Washington was in Yorktown preparing to battle the British that were crossing the Atlantic Ocean. The victory in Pensacola destroyed supply lines that the British were setting up in hopes of ambushing George Washington from the rear in Yorktown. Because Galvez was successful in Pensacola, Washington was able to be successful in Yorktown and go on to establish the birth of the United States. Steve was shocked when he learned how significant Pensacola played in the establishment of the nation. From this victory, Captain Bernardo de Galvez was promoted to Commander General.
In the years ahead, the event of the Louisiana Purchase brought many Spanish settlers from the West to venture east again back to Pensacola doubling the population of Pensacola. During these times, there was much growth to follow.
“Pensacola was a hub for commerce along the Gulf Coast and across the Gulf of Mexico. Products from the interior, such as lumber and bricks, were processed or manufactured along the bays and rivers of the region, and were traded widely using water transportation.” 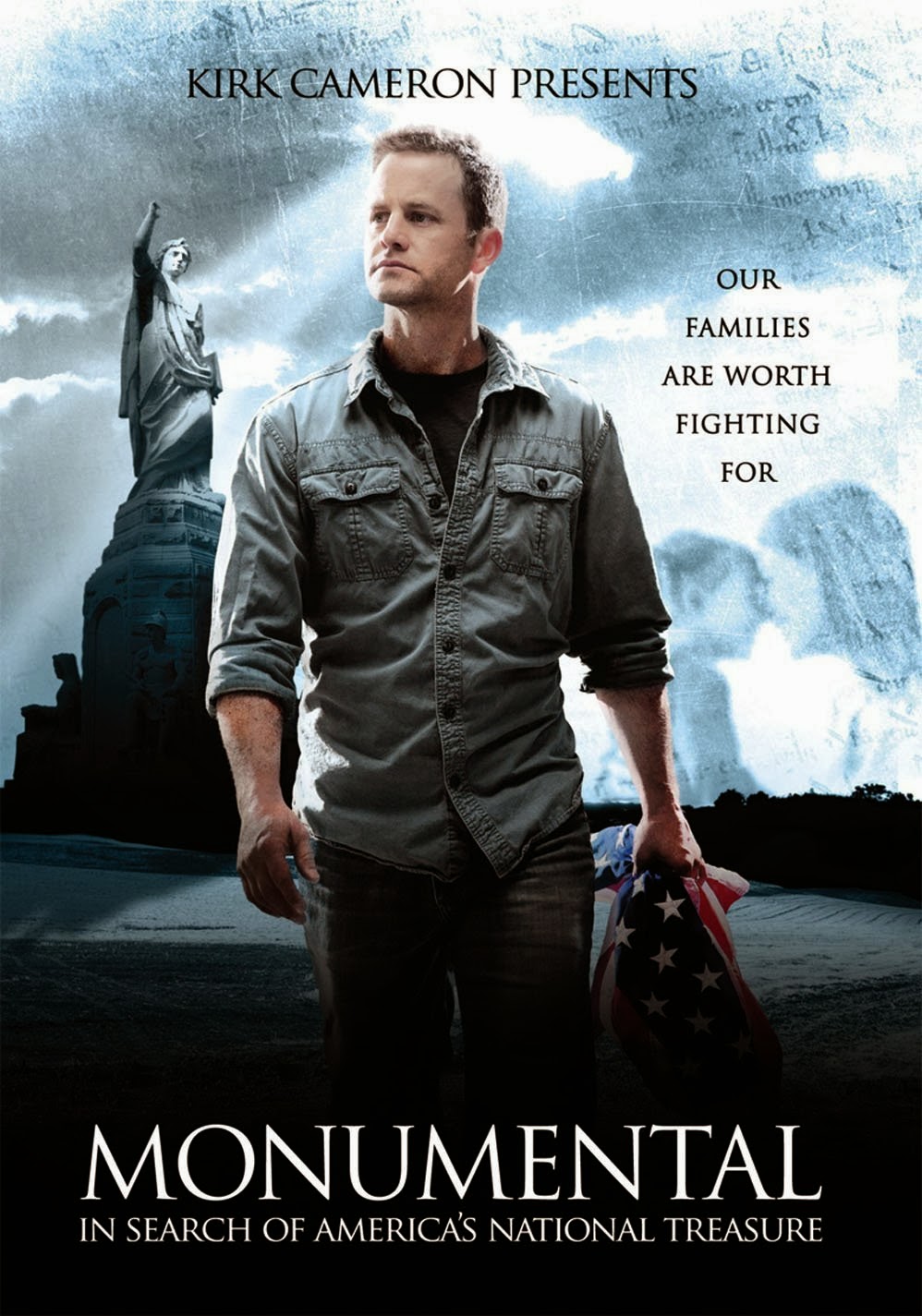