Home GLM Confronting the Evil Lie “…where Christianity was directly involved, was the kind of sanctification of the process of slavery in relationship to divine intent made slavery such a heinous act”. Michael Eric Dyson
GLM

Confronting the Evil Lie “…where Christianity was directly involved, was the kind of sanctification of the process of slavery in relationship to divine intent made slavery such a heinous act”. Michael Eric Dyson

WATCH! LISTEN NOW!  Greg, Pat and John share about a recent interview that took place on “The Ed Show.”  Michael Eric Dyson hosts author and filmmaker of the movie: “America: Imagine the World Without Her”- Dinesh D’Souza and also hosts a panel of Zerlina Maxwell and Eric Boehlert who respond to Dinesh’s views. This idea that America is based on theft is never effectively answered. ” states D’Souza. They volley back and forth regarding the history of America regarding slave trading and how America got their land. Interviewer Michael Dyson brings the attention to the heart of the matter: “Not until America, where Christianity was directly involved, was the kind of sanctification of the process of slavery in relationship to divine intent made slavery such a heinous act”.  Looking at the history of the church, we have to acknowledge that what has been done, in the name of Jesus, has to be dealt with, taken to the Cross and repented for. We cannot hate our brother based on the color of their skin and expect to be welcomed into the gates of Heaven; that would be a false gospel. If one claims to love God, than we must love our brother who is created in the image and likeness of God. “Whoever claims to love God yet hates a brother or sister is a liar. For whoever does not love their brother and sister, whom they have seen, cannot love God, whom they have not seen.”  1 John 4:20
Also in this panel, D’Souza reveals the relationship between President Obama and Saul Alisnky and the truth that they in fact never met.  D’Souza continues by sharing that the relationship between President Obama and Hillary Clinton is closer than the relationship between Hillary and Bill Clinton in regards to their acquaintances with Saul Alinksy.  Greg highlights his recent statements regarding President Obama as “working for “ Alinksy and retracts them under this recent awareness of now understanding that the President never actually worked for him.  Be encouraged as you understand that there is a wide road, and a narrow road in regards to the history of America, and so much more. Also shared in this segment: The Ed Show, America, MSNBC, 12 Years a Slave, The Great Commission, Saul Alinsky, Barack Obama, Hillary Clinton, First Nation People, Christopher Columbus, and Dinesh D’Souza. 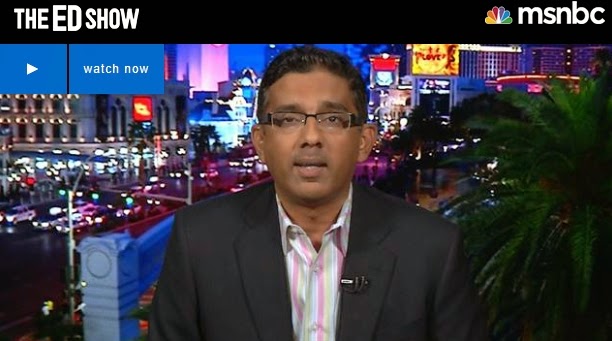