LISTEN NOW! Greg, Pat, and John share about a recent CSPAN speech given by Former United States Ambassador to the United Nations, Susan Rice. She shares the deep concern for Israel as sirens continually sound, and terrorist rockets are falling daily upon Israel. She highlights the priority of Israel’s right to defend itself and the reality of Hamas as the one causing civilian casualties. She expresses America’s unwavering stance alongside Israel within the United Nations. Susan Rice herself emphasizes being the Former United States Ambassador to the United Nations. In light of this, it comes across as encouraging, but with a better awareness of past events in the United Nations, questions are raised.
Since 1975, an unstoppable voting block made up of Muslim Nations and Communist Nations were formed that continues to pass resolution after resolution when a submission is made against Israel. It is important to remember, that regardless of the size of a nation, only one vote is awarded to them in the United Nations. In a majority vote involving a group of 10 people, it doesn’t matter if 8 will always vote a certain way. Regardless if 3 people vote in a positive way, the 8 will come out on top every time. Susan Rice knows this. It doesn’t matter how many times issues are presented to the United Nations in favor of Israel when the outcome is already known.
In light of the continual pressures upon Israel from the world, and the sudden bold allegiance with Israel from America’s leadership, you have to take a deeper look at past actions of America’s current administration. According to Pat Robertson, President Obama has a 72% approval rating amongst Muslims, according to Michelle Bachmann, America is erasing every presence of the Muslim Brotherhood from files, and the aide to Former Secretary of State Hillary Clinton, Huma Abedin is intricately connected with the Muslim Brotherhood. While ISIS, the radical Islamic group killing, enslaving and running Christians out of Iraq is proclaiming that President Obama agrees with their actions in the Middle East, reports CBN News, while demonstrators in Egypt holding up signs saying “Egyptians love Americans BUT Your OBAMA is supporting TERRORISM”

While the words being said couldn’t be more of an encouraging breath of fresh air as America is reminded of its allegiance with Israel, there are deeper realities and actions that can’t help but cause concern and questioning. These truly are difficult days and there are days no greater than now that as the church we MUST STAND WITH ISRAEL! Find out the points of this speech, concerns that are raised, and so much more. Also shared in this segment: Susan Rice, Hillary Clinton, President Obama, Prime Minister Benjamin Netanyahu, John Kerry, Hamas, terrorism, Iron Dome, prayer, allies, the United Nations, voting blocks, and Israel.  WATCH FULL PROGRAM! 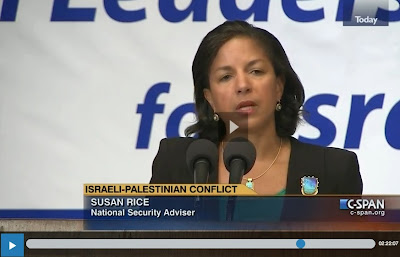 Prayer for Israel
Praying For President Obama
“JJ” Jesus and Jews
Making Sense of seemingly “Schitzoid” Government Leadership; “Organizers have to be well-integrated schizoids…” says Marshal Ganz
Polarization! – Are They Using Tips from Lucifer to organize America and the world?
Are They Using Tips from Lucifer on how to Organize America and the world; really?
President Obama has “72% Approval Rating with American Muslims” says Pat Robertson CBN
Islam Infiltrates U.S. Government?
Prophecy:Seeking Biblical Perspective to the Crisis in Syria
Prophecy: Are you about to be drafted for a war?
U. S. Still Working with the Muslim Brotherhood who are Fighting Against Christians in Egypt says Coptic Pope Adviser
Prophesy! The Polarizing is done, the Nudge is Next. DON’T BE NUDGED! Cindy Jacobs Prophetic Word | Israel, Borders Compromised, Abandoned Children, Valerie Jarret and so Much MORE…
Secretary of State John Kerry ; Pushing Israel into No Win Deal?
Revealed: U.S. Secretary of State John Kerry warns that Israel Risks becoming an “Apartheid State”
Travesty of Justice Says Prime Minister Benjamin in response to United Nations Investigating Israel for War Crimes
Approaching Catastrophic Consequences; Potential WWIII and it BEGINS in Israel?
I1S2R3A4E5L6    P1E2R3S4E5C6U7T8E9D0