ISIS must be STOPPED! They are Beheading Children: It’s Time to be the “Good Samaritan” and Do Something

LISTEN NOW! WATCH! John, Pat, and Steve share about the horrific tragedies that are continuing to happen in the Middle East. Many have hoped and prayed that it wouldn’t get worse. It has. Reports are being released that the terrorist organization, ISIS, is now beheading children. This is true progression of evil. It is wrong, it is horrific and just plain evil. CBN reports from Northern Iraq how Iraqis are being persecuted, and how in one day, thousands of Iraqis have had to flee from fear of what ISIS is doing. An Iraqi man stated,” they take everything from the house, from the store, everything, they take like the machine. Because they are Christians, just the name Christians, they hate Christians especially. We don’t know why.”  ISIS has continued to expand their own borders by breaking down the borders of others. Currently, ISIS has taken control over Northern parts of Iraq and Eastern Syria. Dr. Sarah Ahmed, from the Foundation for Relief and Reconciliation of The Middle East, stated, “What is happening now to the Azidis, to the Christians, to the minorities, like in the last couple of days to the Christians, is a genocide.”We must continue to pray. Fox News also interviewed former Arkansas Governor, Mike Huckabee and discussed the Vatican’s strong statement against ISIS’s actions. Mike Huckabee brings great clarity to what a peace maker is in a situation such as this. How Jesus shared the story of the Good Samaritan and his response to the broken and robbed person highlights for us how to respond. Find out the detailed realities of what is happening, how the church can respond, and so much more.  Also shared in this segment: ISIS, CBN, Fox News, the persecuted church, Azidis, President Barack Obama, the Good Samartian, and prayer. 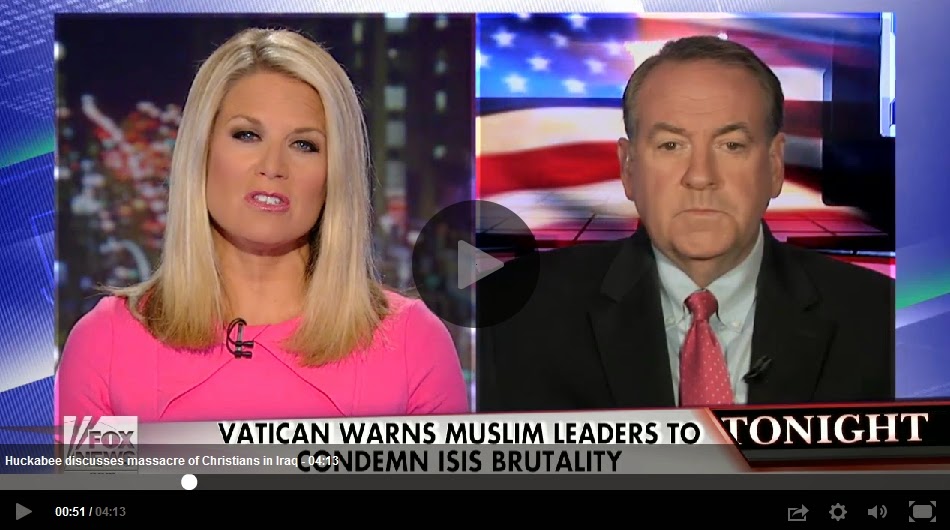