Home GLM Is the President Writing Secret Letters to Iran while Iran’s leader threatens the Annihilations of Israel?
GLM

Is the President Writing Secret Letters to Iran while Iran’s leader threatens the Annihilations of Israel?

LISTEN NOW! WATCH! What is going on? Israel is America’s biggest ally. CBN reports that President Obama is reportedly writing letters to the Supreme Leader of Iran. The Obama Administration has insisted that it will not coordinate military forces with Iran. While this is happening, Prime Minister of Israel, Benjamin Netanyahu, has posted a video declaring the vitality of the international community to pay attention to what is going on. It appears that all the attention is being taken off of where the attention needs to be most.  As the church, it is essential to remember that however goes Israel, so goes the Church. First, the Saturday people, and then the Sunday people. Be educated and encouraged as you hear where to keep your attention, your prayers focused and so much more. Also shared in this segment: Israel, Iran, Valerie Jarrett, Green Party, uprising, and prayer. Greg, Pat and John shared in this segment. WATCH FULL PROGRAM! 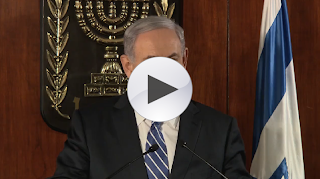 Prayer for Israel
Praying For President Obama
“JJ” Jesus and Jews Don’t Be Distracted!: Keep Your Eyes on Israel
You Can’t Organize Israel
The Ayatolla, Iran’s Leader, Calls PM of Israel a Rabid Dog? – Iran WILL NOT get Nuclear weapons, says PM Netanyahu
Are You Ready to Stand with Israel?
Is Israel on the Verge of a third Intafada
Anti Defamation League : Anti Semitism on the Rise in the World
Organizer of the Day vs Organizers of the Night: Are They Using Tips from Lucifer to Organize America and the World
To the Jew First then To the Gentiles: Those who Bless Israel will be Blessed; Those who Curse Israel will be Cursed- It really is this simple
Revealed: U.S. Secretary of State John Kerry warns that Israel Risks becoming an “Apartheid State”
Secretary of State John Kerry ; Pushing Israel into No Win Deal?
Is the Secretary of State throwing Israel Under the Bus by Urging Lawmakers to Stop New Sanctions on Iran?
Nuclear Option- Only One True God – New Deal with Iran Israel’s Prime Minister says Historic Mistake
Rise of Anti-Semitism
Truth is the only way to fight Anti-Semitism
Anti-Defamation League Released Global Survey –Anti Semitic Attitudes Still Persist All Over the World
Is Valerie Jarrett the De-facto President?
Prophesy! The Polarizing is done, the Nudge is Next. DON’T BE NUDGED! Cindy Jacobs Prophetic Word | Israel, Borders Compromised, Abandoned Children, Valerie Jarret and so Much MORE…
Woodrow Wilson Selected before Elected and was his wife the First Female President? Is there any relationship with the Obama Administration?
Alleged Negotiations taking place with President’s Iranian born Adviser Valerie Jarret, not John Kerry, S.O.S.
Keep Your Eyes on Iran
Isis, Iran, Mexican Gangs, and America – The Progression has started an Organized Effort against Humanity